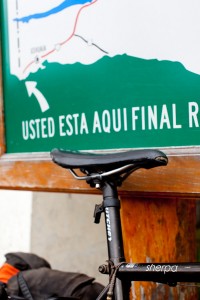 With my hair growing endlessly as kilometres go by, I get out of Bolivia and enter Chile at the end of October 2013. If some of my friends were telling me “Already in Chile! You’re almost done! Only two countries left!”, I was receiving the encouragement while clarifying. We forget that Chile, with an atypical geographical form of a thin land layer stuck between the Pacific and the Andes of 180 kilometres in average (going between 90 y 400 kilometres), stretches for almost 4.300 kilometres from North to South. With it’s neighbour, the country shares the third longest border of the world (after Canada/USA and Russia/Kazakhstan). Argentina, quite wider, is the eighth biggest country of the world. Through both countries, I cycled 7,625 kilometres, which represents almost a quarter of all what I did through the Americas!

If on one side, I was looking at weirdly through well shaved men, on the other side, I was integrated more easily with my long hair and my beard, where everything is more relax (on which point Chilean don’t hesitate to point out the laziness of their neighbours). Unfortunately, END_OF_DOCUMENT_TOKEN_TO_BE_REPLACED

Let’s start back from where we left on the former video, in Perito Moreno, Santa Cruz province in Argentina, for the last month on the road. A feria in Gobernador Gregores, an imposing glacier, quiet roads and Tierra del Fuego… discover all that in the last video from CycloExpedition Americas!