Crossing the border on the northern shore of General Carrera/Buenos Aires was done under the astonished eyes of the policemen seeing a foreigner passing by here; at the point that they were wandering what to do with my passport (and moreover my reciprocity fee receipt, a kind of no-paperwork-no-refusal visa for Canadians, United Statians and Australians) in the uncomputerized office. It seems that they are more used to lift the barrier to Chilean and Argentinian cowboys living in the surroundings. Despite that, I get my stamp quickly enough and here I am back on the dirt road. If it’s always the same lake on my right, it’s an other landscape that’s unroll in front of my eyes. As we can see on a satellite view of the lake, the border has been drawn where the mountains straightly stops. The pampa stretches out on the Argentinian side. Pushed by a good wind, I’ll arrived quickly to Perito Moreno even through the big rocks and sand.

Guillermo and Christian crossed the border on the South shore of the lake, after taking the ferry between Puerto Ibañez and Chile Chico. The border is more used to tourists than the one I took, but getting into Argentina never had been a huge problem anyway. However this time, they had the chance of being “chosen” by a custom agent trainer to show to the public servants there how to do a work respecting every norms and procedures. Two hours of over-zealousness later, Guillermo and Christian split in the Argentinian town of Los Antiguos. Christian will take a dirt road along the border while Guillermo will make the last 60 kilometers to Perito Moreno, where I’ll meet him at a Warmshowers’ host.

Let’s demystify Perito Moreno. Santa Cruz province counts Perito Moreno National Park, Perito Moreno glacier, which is not in the homonymous national park, and the town of Perito Moreno, which is about 700 kilometers from the glacier. Almost all towns in Argentinian Patagonia have a street honoring  the scientist, naturalist, politician, botanist, explorer and cartographer who played an important role in the region. So we arrived in Perito Moreno town with the objective of going to El Calafate, near Perito Moreno glacier in eight days. But before that, we take a little day off… ah, an other one… and why not an other again with our marvelous hosts, sharing good times inside a warm house while autumn settles.

After this time spent in Perito Moreno, we didn’t think seeing Christian again, but it was such a surprise to see him arrives on our third day while we were getting ready from where we camped in what looked like a place to make cement while the road was paved. Back on the road together!

On my map, the road 40 seemed to be composed of straight unpaved lines. During the last years though, a lot of work has been done between Perito Moreno and El Calafate. When we were there, only about 120 kilometers of road was still unpaved which the last 30ish was on construction. The pampa is a lot dryer than the Carretera Austral, but the disturbing element here is the wind. While we were warned how bad the wind can hit you on the side, that would make us push the bike even if the road was flat, we got here in a kind of general respite. The wind stopped since a week. Actually, we learned that very strong wind is mainly a summer’s caracteristic, from December to March. Being late in the season has its good parts. But of course, even if during the day the weather is perfect for cycling, it’s cooling down very fast in the evening and the nights were cold. This is not without talking of the sun setting five minutes earlier every day more we are going South and getting closer to winter solstice.

If we don’t camp directly on the sides of the road, it is possible to stop at Vialidad buildings, located in between the few settlements on the road, where live and work a team of worker in the winter for snow removal. The rest of the year, the staff is minimal and the solitary man who keeps guard at the place will gladly offer water, a place to pitch the tent away from the wind if he doesn’t simply offers to sleep inside. It’s at Tamel Aike Vialidad, while we were chewing horse meat, that arrives Gustavo, an Argentinian that we already met two times before but which the opportunity to share the road with never happened. The next day, the four of us arrive to Gobernador Gregores while a feria was going on, where the gauchos, the cowboys around, gather for equestrian events. Gustavo will stay longer and there will be only three days left with Christian, who’ll go at El Chaltén while we got straight to El Calafate. 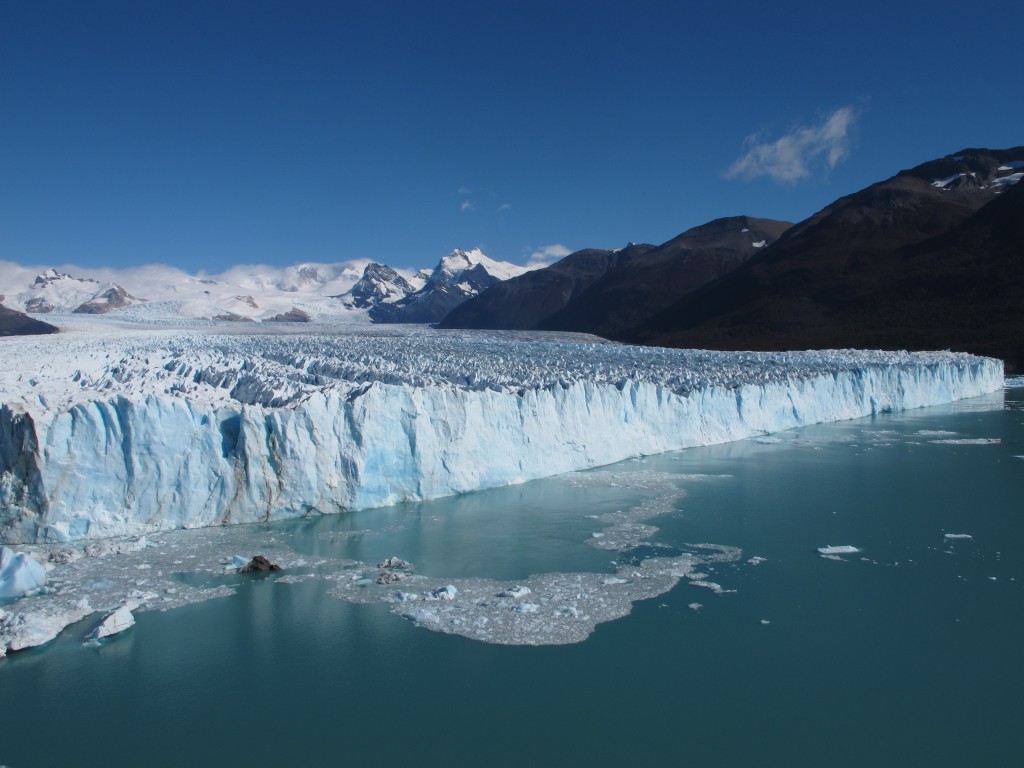 From there, we pay ourselves a little trip to Perito Moreno glacier. The entrance fees just went up, but anyway, you can’t hesitate about going to see the glacier from your own eyes… and also your own ears. If it can be hard to understand the proportion of the ice monster on picture, the immensity of the place leaves the tourist on the spot also perplex in front of the amplitude of the phenomena. 60 meters high, 5 kilometers wide and 14 kilometers long, the Perito Moreno glacier goes down on Argentino lake to the point on sometimes cut the lake in two. The water on the blocked side rises and eventually brake the ice wall – a phenomena happening on an average every 4 or 5 years. We are quite small in this world. A network of metallic raised walkways gives the opportunity to enjoy the view without harming the fragile vegetation on the slope of the lake in front of the glacier. The most spectacular is the mini tsunamis, the roarings and cracking that produces the glacier while gigantic ice blocks detach from the structure. The day was wonderful, clear sky and no wind so we spend 6 hours enjoying the show with our little picnic. If in the morning the light is better to take pictures, most of the buses are leaving early in the afternoon and the site is a lot quieter from there.

After that, back on the pampa with Puerto Natales as a destination, in Chile. One afternoon, the wind surprised me, roaring so much in my ears and making me loose balance on my bike that I wanted to stop to every canalization under the road to take a wind break. Those who tasted that continuously earlier this season definitely develop a psychological shell in front of this imposing companion. 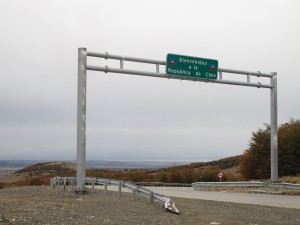 There are two border passes to get to Puerto Natales. Cerro Castillo, close to Torres del Paine National Park has a little segment on a dirt road, but this way get closer to the famous peaks of the national park. I chose to go through Rio Turbio, a little bit more South, spending a half a day more in Argentina, climbing the street of this surprising industrial town in the middle of nowhere with a huge in-construction thermic central to give job to the carbon mines’ worker in the surroundings. A few kilometers out of town, I arrive to the border pass. From here I can see the sea and starts an fifth and last segment on Chilean lands.