Lakes. That’s what we’ll see in the next three weeks. Binational journey that will let us bitter on one side, surprised on the other one.

There aren’t as much elsewhere in South America, but we can find them even in small towns in Chile and in Argentina: tourist information offices. But it seems that we won’t learn : always doubt about what they are saying. Just an example: in Melipeuco, on the second day back in Chile, I have the courage to disturb the tourist info lady chit-chatting with her friend outside to ask on the best way to reach Villarrica. Her colleague is more interested to take our datas for his stats than answering our questions. They eventually show a different way than the one I thought (going beside Colico lake), telling me that the other road is totally paved to Villarrica. Really? Maybe we can take this road to get there faster. Mistake! That road was newly paved indeed, but just for about three kilometers. After that, we were stuck on a narrow road (a kind of one lane and a half) all hilly and dusty, filled with curves where the average Chilean drives as if alone on the road. Fortunately that we were on bicycle and that we could cross, but sincerely, I would have been afraid to be on that road on a car!

Maybe it wasn’t the best timing to be there while it was summer holidays for Chileans. Villarrica doesn’t only have “rich” in it’s name. It was even worst in Pucón, 25 km further on the same lakeside, where people were looking down at us even if they where sat, drinking their 5-dollar coffee. 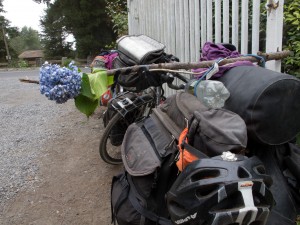 The road between the two towns was infernal : no shoulders and no-respect cars speeding it up beside us. Doing 10 kilometers on this road was more mentally tiring than climbing a 2,000-meter pass. We stop and ask at a campground how much it would be for the night. She answers us without a flinch that it is the equivalent of 50 dollars. This doesn’t include breakfast served in the tent, just to be sure. We’ll try to find a place that makes more sense. Before going back on the road I “borrow” a quite visible flower and find a spiky wooden stick to build a warning sign/weapon. If the drivers around here don’t care about killing a cyclist, they do care having a scratch on their car! All of a sudden we have more space for us.

Three elements convinced us to shorten our stay on the Chilean side and go back faster than planned in Argentina: nasty drivers, the bitterness of the people we met and the flavorless bread and coffee. I don’t understand what’s going on; further North, Chileans were quite nice but here, we don’t connect. Argentina is just beside and nobody’s holding us here. Some lakes less on the Chilean side and some more on the Argentinian side, that’s it!

Before leaving the country, we at least take the time to cross Villarrica National Park by a small road linking Pucón and Coñaripe. If the properties around Villarrica volcano exploit the thermal sources with exorbitant entry fees, the public authorities are conserving the top of the volcano and it’s neighbors, Quetrupillán and Lanín volcanoes linked together, protecting a population of millenary ancient araucarias. The portion of the road in the national park is awful, but gives us the happiness of being alone, in peace. From the pass, we can enjoy an extraordinary hike to Pichillancahue glacier.

The downhill toward Coñaripe brings us on the Calafquén lakeshore, part of a seven-lake network (one of them in Argentina) building up Valdivia river. We meet Eranko in Coñaripe, a quite sympathetic Chilean from Santiago who came in the region for a short bike trip. Together, we go along Calafquén, Pullinque and Panguipulli lakes toward Pirehueico lake, that needs to be crossed by boat to get to Lacar lake on the Argentinian side. Our big trip down to Ushuaia in Tierra del Fuego impresses him and he has just one idea : give up his initial plan and go on with us two or three more weeks. Why not! Eranko never went out of Chile and he doesn’t even need a passport to go to Argentina. He builds up the idea the whole day and the next one, before jumping on the boat, he retracts : paperwork to do before his internship which is starting next month, the girlfriend, money… maybe a reason is stronger than an other one but together, they made him change his mind. Going on the road like that has it’s part of sacrifices even though some people sees it as incredible luck. The line is sometimes quite thin between which side you gonna fall when taking a decision. Eranko went back home but still might keep in mind an idea of a longer bicycle travel : do it!

Rubén take over, a Chilean who jumped on the same boat than us: we’ll share the road for a few days. During the next weeks, I’ll see more travel-cyclists I’ve ever seen since the beginning of the trip. Moreover than the many Chileans and Argentinians piling up there bags on their bicycles, international tourists also come on short trips on the famous road of Los Siete Lagos (the seven lakes). The region is wonderful. We did well to come back earlier in Argentina, even if Chile is trying as much as they can to promote the InterLagos road and that I wanted to go this way at first. On the Chilean side, the damage is done and it isn’t a touristic promotion campaign, pavement or bright signalization that will change something : lake shores lands are private. On the Chilean side, we find ourselves in a national park, being able to fully enjoy the environment. 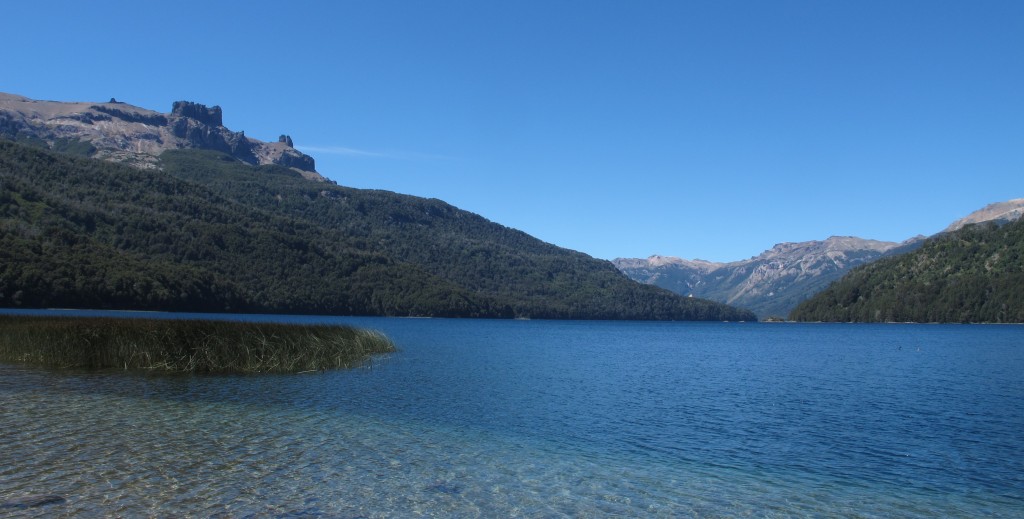 The road of the seven lakes accomplished, some other lakes awaits us! The huge Nahuel Huapi greets us close to quiet Villa La Angostura. We have to go around the lake to the east to reach active Bariloche, leaving the forest for a while, the Patagonian pampa scratching the east shore of the lake. South of Bariloche, we are back in the forest, quietness and beautiful landscapes, that we are sharing with Christian, an Argentinian who left his little town in Buenos Aires province to wander across Patagonia, sometimes over his own traces while he traveled in the region ten years ago. Why doing a second trip to Ushuaia? He tells me that things have changed in ten years and that he couldn’t visit some places the first time. It’s true that it’s not the final destination which is important, but the way to get there. And that’s the happy problem : we have to choose the way.