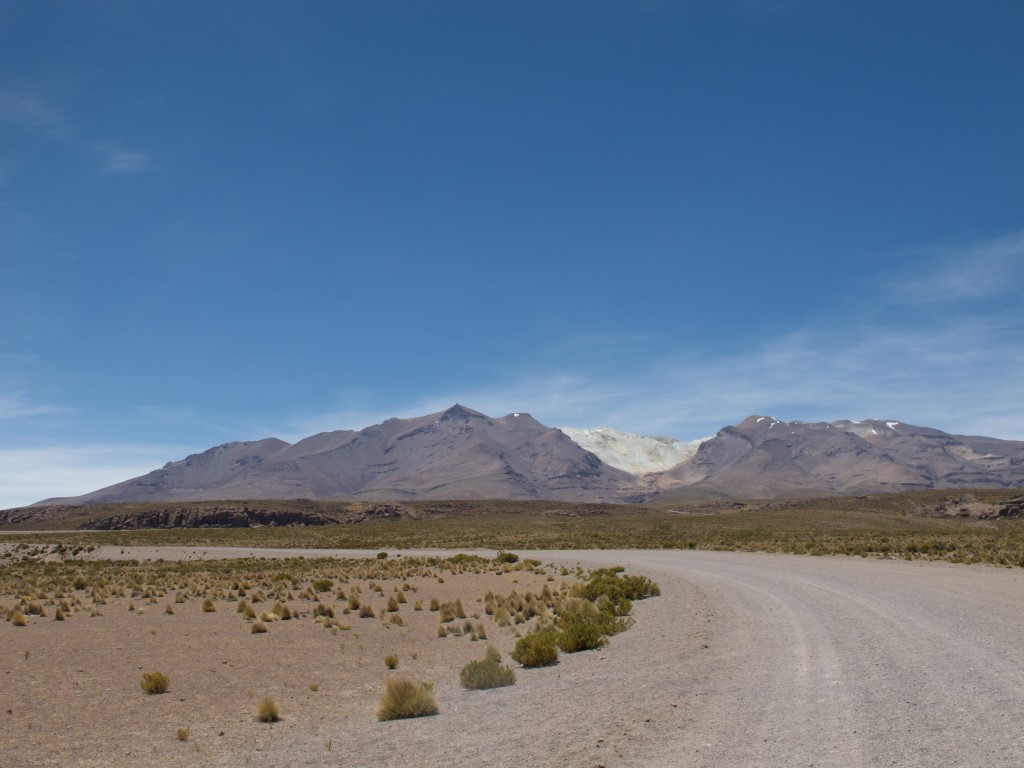 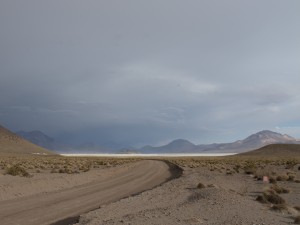 It’s the Ruta Andina, a Chilean road following the Bolivian border, which was my welcoming challenge in the fourteenth country of this route. Ten days of relative solitude, where it’s needed to bring enough food and make enough water reserves when it’s possible. There were only in Colchane and Ollagüe (see the map at the end of the blogpost) where you can find basic food products, considering that the shop is open. In Colchane, I had to go to the hotel with a restaurant to negotiate bread and tuna cans. I was even able to get a hand on an onion! At the same time in town were a German couple driving a 4WD and I helped them with Spanish speaking in the restaurant. I was stupid enough to go on this road without enough gas for my camping stove and they made me avoid a 10-km detour by giving me some. It was the first generous action of my Ruta Andina’s “guardian angels”. They were traveling without much hurry and were driving around through a lot of side roads. I saw them everyday afterward and they were making sure that I wasn’t missing water.

There are good water points in the Northern part of the road, but in the South, things are harder. But no panic. If it’s not the rare vehicles passengers (a few tourists and workers from the few mines around) which are passing by and stopping to know if I’m missing water, there are in few places carabineros stations, policeman with military look keeping an eye on the border, where you can get some water. One day, I was cycling near three strange buildings looking like they belonging to some mining company. It was a pumping station. “Pure water, excellent” was telling me the man filling my bottles with this water coming from underneath, which will be contaminated in the mineral extraction process. The Ruta Andina, goes through three protected territories (Parque Nacional de Lauca, Reserva Nacional de las Vicuñas, Monumento Nacional Salar de Surire), but also big mines (one in an unprotected area of Salar de Surire, and the giant Collahuasi).

How not getting lost on those roads with a quality as varied as there are stars in the cold night sky (I even had to push my bicycle over a hundred meters on a road going downhill, gotta make it!)? Sincerely, secondary roads in Chili are better signed than main roads in Peru! A detailed map is still a good plus though, because knowing the town’s (or former town’s) names ahead will help following the indications. You can print your own maps on the Chilean Public Work Ministry website, or for even more details, Compass maps that my German friends had in their 4WD show all the road possibilities. It can be useful, because maybe passing by two or three thermal waters isn’t enough following the “main” road, than ten days in this landscape isn’t long enough and that you want to make more detours! On my side, I kept the more or less straight line, linking the salars between them, those “salt lakes”, oasis for the fauna meeting there.

My loyal companion on this road was the wind. It shows up all of a sudden at the beginning of the afternoon and aren’t leaving before 9PM. It’s blowing from the West or Southwest, so generally not right in the face, but hard enough to yell insults to it. It’s buzzing, it’s slapping, it’s so present in my ears! Setting up the tent is often a good challenge. Fortunately, there are those half destroyed stone houses in uninhabited villages giving me the opportunity to hide from the wind, or a natural structure, or even some national reserve unused (when I was there) infrastructures.

In the morning, I curl up in my sleeping bag waiting than the Sun warm up my tent and start to unfreeze my water bottles, the few nights where there were frost. But the days are warming up fast. It’s silence out of the tent. Real silence. Disconcerting, as this morning silence is contrasting with the afternoon racket.

I get to Calama, an important mining town, about ten days later. Hundred kilometers further is more touristy San Pedro de Atacama. A CouchSurfing host greets me in Calama and gives me the opportunity to rest, eat, eat and eat, and fix some stuff. My sleeping mattress started to leak on the Ruta Andina. I foolishly slept on my belt and the metal pin pierced the mattress. Those three centimeters between the ground and me makes all the difference, letting me sleep on about every uneven surface (and I quite abused it). I was very happy to see that it can easily be fixed, like a tire’s puncture. 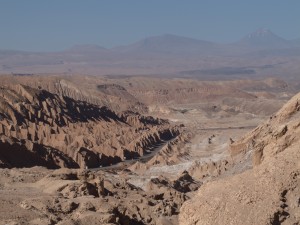 I’d seen more llamas than humans over those ten days, as the title of the recently edited video about this road suggests. The Ruta Andina photo album can be seen clicking here, and a map showing the road taken is down below! From Calama, I pass through San Pedro de Atacama without lingering too much. Getting out of San Pedro means climbing 2,000 meters in 50 kilometers, but after this straight and abrupt line in the middle of desert, Argentina is not far away!

5 thoughts on “The Ruta Andina”