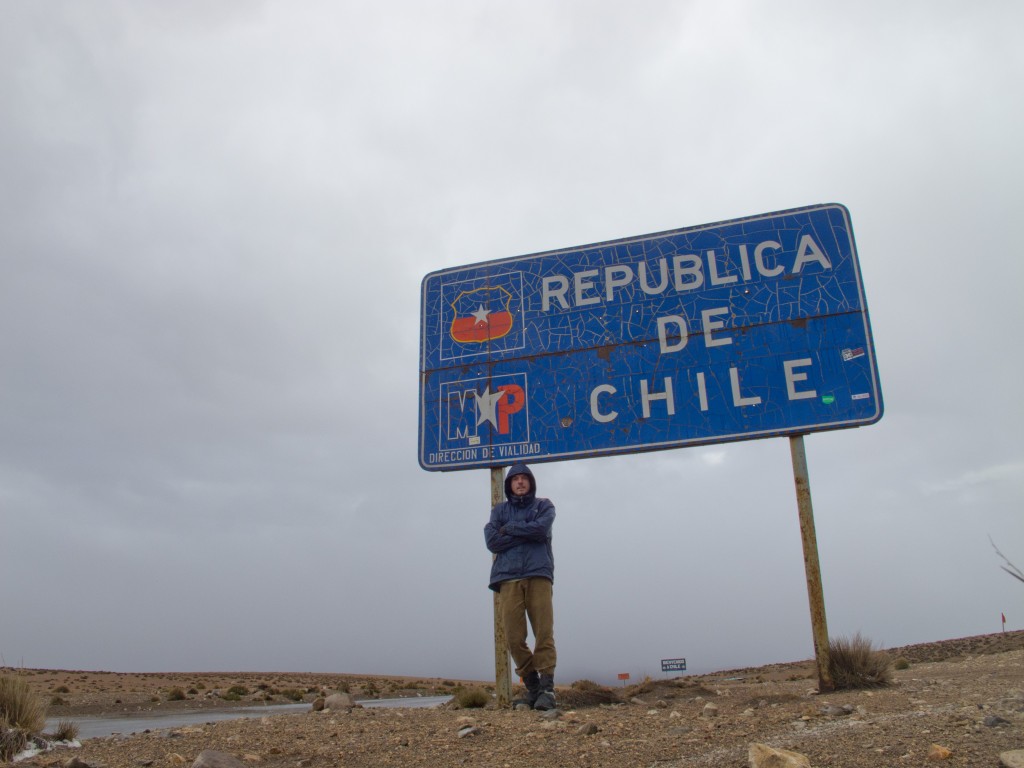 At the pass’ summit, on the border with Bolivia and Chile, I quickly take a picture. A cold rain was on me most of the time while going up and an other shower was threatening me in the distance. I have to go down for about 10 kilometers before getting to the customs, half of the distance passing a long line of trucks waiting their turn to go through the strict Chilean control (for about 12 hours, of what I’ve been told later).

Modern buildings, signalization telling me where to go, I make my passport stamped. When I say to the custom officer that I take the small dirt road following the Bolivian border, which is starting at the custom station, I deserve a hybrid look saying “It’s really doable on bicycle?/Can he just take the paved road going down to the coast to make it simple?/Crazy guy on a bike!/But it still look quite fun what he’s doing.” His colleague sitting in front of an office behind lift his head and tells me that two Slovaks (which I met at the casa de ciclista in La Paz) passed here earlier this afternoon. They asked if I passed here already (they left a day later, but were taking a bus to skip a part so they overpass me) and if I get here today, to tell me that they’ll finish the day at the hot springs. Hot springs? My spirit wake up thinking about the happiness of finishing this cold day in a hot bath smelling sulfur. I am being told that it’s on my way, “very close”… “half an hour away”… “well maybe an hour”. The sun is almost setting, but whatever, I’m going.

I can’t fly right now, as I need to put all my bags on a conveyor belt to detect fresh food (fruits, vegetables and meat). Chile was able to protect themselves from agricultural illness attacking the rest of the continent, helped by the Andes Cordillera. The matter is quite serious at the border and I was already psychologically ready to spend the next days on my reserves of rice, pasta, tuna and tomato sauce, as the road I was taking isn’t very populated and deserved with shops. 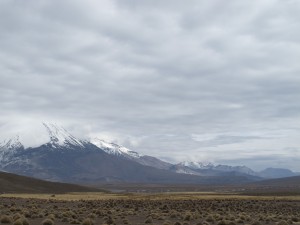 My first pedal strokes on this little road initiate me to the worst. The rain transformed the road in a mix of sand and small rocks. I sink into it. It’s not raining anymore… it’s snowing. The sun is falling down. I’ll have to take advantage of the half hour of grace before darkness, and might have to take my head lamp later to go on. Better getting there late and camp beside a warm water source than camping in the middle of… of not too much with shrubs, wind and cold.

I hear a crack. I broken spoke. I’ll fix it when I’ll arrive. Forget the tiredness. Forget the hundred kilometers I already have in my legs today. So close, I’ve been told. A building over there. I get closer to have a look, it’s just an abandoned farm. I have to push my bicycle often, because I don’t want to hurt it too much with the broken spoke. I get closer obviously, it’s probably not too far. I even start to smell a sulfur smell.

After almost a year and a half on a bicycle, I still get tricked. I can’t control my ecstasy when I’m being told “it’s here not too far”, even if I know, I know very well that “allí no más, cerquita, here no more, quite close” generally means “I don’t really know, but I won’t discourage you”. Moreover, it’s going up. I resign, I set up my tent on the side of the road and I’ll fix my spoke on the daylight.

But when I look closer the next morning, I see that the problem is not the spoke, but the hub, which broke where the spokes are holding to, for a second time, like in Southern Mexico. I don’t have any other choice than going back to the custom station, find a way to get a transport to Arica, on the coast, find an other part and remake the wheel. A quite expensive day. The next day, a take a bus back up to the border, even though the thought of staying there and go on along the coast. But the idea of riding on long straight lines on hot and arid weather didn’t convince me. At least, thanks to this misadventure, I was able to get a more diverse food reserve with avocado, tomatoes, bananas and bread for the first three days. Seems like my bicycle and I weren’t ready, and fortunately the problem showed up in the first kilometers. A message from my bike, to tell me not to go too fast, not to ask too much.

Yes, my bicycle send me messages. Some other times, when I stop for a long moment to rest for a few days, I deserve a small jealousy crisis. “You ignored me during all this time? Here you are!” A flat tire, a broken spoke, a chain going crazy. Something small, just to remember me I’m quite dependent of my steel structure.

So I go back on the road in the afternoon, better prepared, my tires reversed (for more traction) and more well-rested. If everything goes well, I’ll arrive in Calama in ten days, going through very few villages between here and there.

And the hot springs? They were 10 kilometers away. Even if on my second start, the road was dryer and more compact, I nonetheless took an hour and a half to get there. The Slovaks were gone, obviously, but I set up my nest there for the rest of the day. A warm shack, perfect to spend the evening, roll off my camping mattress and sleeping without shivers. The next day, yes, this time, I’ll go on Ruta Andina on a more serious way.