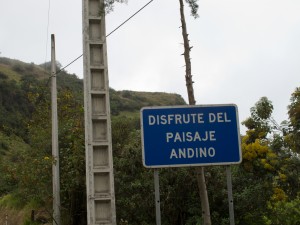 Three little weeks, two of them sitting on the bicycle, were necessary to cross the little Ecuadorian Republic influenced by Chavez’ 21st century socialism. In so little time, I crossed 8 times the Great Continental Divide, without doing too much detours: the PanAmerican go straight in the Sierra, going around volcanoes. The highest snowy peaks were hidden behind clouds, as I haven’t been lucky for the weather.

I slept only once in commercial lodging, so I won’t be able to talk about price and quality. If Ecuadorians are less hyper socials and a little bit more discreet than Colombians, they will nonetheless help you out if they can. Moreover, while it was common to see lodging even in the smallest village in Colombia, it’s less the case in Ecuador. It gives the chance to vary the places where to roll off the camping mattress. I slept at a gas station’s owner’s house, in a firefighter dorm, on a military base, at the police station and beside (without knowing it before) a town party.

There are two casa de ciclista, one in Tumbaco and the other one in Ambato. I’ve been to this last one. They are generally cycling passionates who open their house to travelers on two wheels. A little bit of help in daily chores is generally appreciated at it can be a good place to meet other cyclists. 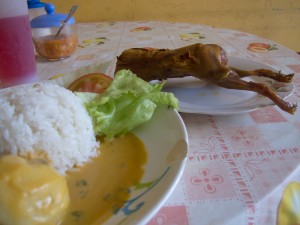 The daily fixed menu almuerzo including a soup, a main meal (often chicken) and a drink cost between $1.50 and $2.50. It’s sometimes good to enjoy culinary discoveries even though it’s a little bit more expensive. Here the opportunity is to try guinea pig, named cuy in Spanish. The little beast is eaten from Southern Colombia to Peru. It’s a tender meat, very low in fat (which isn’t a good news for cyclotourists) a apparently richer in protein than other meat.

We also like pork a lot in Ecuador. If you could find chicharrón already everywhere before, which is actually fried pork skin (and fat), here, it’s eaten cook, but not fried, which gives a texture that I still need to learn to like.

The “Citizens’ Revolution”, applied by Rafael Correas’ government which start a second mandate this year, gave the opportunity to the citizens to burn very cheap gasoline and diesel on brand new roads. There aren’t a lot of motorcycles on the road compared to other countries, and more big cylinders. Anyway, small motors have trouble climbing up the steep hills of the country (so steep than I beat up my speed record). Other cyclists have warned me as well about the upcoming legs tiredness. Obviously, first of all the “Citizens’ Revolution” isn’t just about new roads (government announcements beside the road will tell you the good side of the medal, and citizens, sometimes the other side), and secondly, the road works aren’t finished yet. Generally, closer to the capital, better it is, and it worsen while getting closer to the borders. I did to segments of roads out of the Panamerican highway.

Started in Colombia, I went on the Amazon basin in Northern Ecuador, crossing the 0° parallel give it’s name to the country. In Baeza, I took a road going back up in the mountains, bringing me close to Quito. But it’s possible to stay on the Eastern side of the Andes, if humidity doesn’t bother, crossing almost the whole country, going back up in the Sierra at the height of Loja. If the elevation is lower, it’s doesn’t mean it’s flat roads.

From Loja to La Balsa, toward Peru

The Pacific coast in Northern Peru is dangerous for cyclotourists, more specifically a little bit North of Trujillo, close to Paijan. Many organized attacks against cyclists have been reported, which isn’t the case in Mexico and Colombia, where people is usually more worried about security. Some will still go on the Coast, will make a segment by bus, ask to be escorted by the police or will take the risk. A option through the mountains exist, taking the road from Loja to Zumba, close to La Balsa border post. However, you need strong motivation and steel legs.

In a few years, it will be easier to go through there, as the road is currently being paved. But it won’t reduce the steep grades, even steeper than on the Panamerican highway. The road is paved since a while until Vicabamba. Don’t be surprised to meet many flower power United Statians there. The nice climate and the fact that statistics have shown that this is the town in Ecuador where people live the longest (apparently from what’s in the water) have brought a load of retired United Statians looking for eternal life. From there, a new cement pavement is slowly stretching toward the border with Peru (or at least to Zumba, where the project is financed to so far). When I went there, the road was paved until a few kilometers before Valladolid. From there, patience is need on a steep road and sometimes muddy, crossing river without bridges. Just don’t forget to lift your head up from time to time to enjoy the scenery.