Maybe it was perceivable at the end of the Ecuadorian video, but I wasn’t in my best shape. Small parasites have taken control of my intestine. I had pills against that, but still, it was working hard. I stopped for a little day of rest in the first Peruvian town that could offer me a bed.

By coincidence, I stopped during a holiday. “Nation’s day”. On TV, the army, the police and other civil groups were marching on the capital’s streets under the eye of the Republic’s President. The new war toys were shown, acquired for millions. I walk on Namballe’s streets towards the central square to see if the Internet signal is back at the cybercafe (without success) and I listen to this never-ending military fanfare out of the neighbors’ TVs.

I get sad to see the happiness and excitation of interviewed people in front of those war machines while in the country I’m biking in on my first Peruvian days, houses are built from mud and straw bricks that are drying on the side of the road, business’ rhythm follows the periods were electricity is available (if, at first, there is electricity), we eat the perpetual chicken and rice and in smaller villages, toilets are outside latrines installed by international cooperation.

I arrive in Jaen, the “big” city of this northern part of Cajamarca region. Not a lot of cars but hundreds of moto-taxis, a motorcycle were a cabin were installed behind with a bench. This takes away all utility to rear-view mirrors, and I won’t talk about the blind spots (unknown concept). Anyway, here, we honk. To say that we are here, to great each other, to turn, to cross someone, to piss you off… Moreover, people look at me as if I was coming from an other planet, heads getting out of the moto-taxis’ cabins, bawling “gringo!”, kids are pointing me, pulling their mother’s skirt yelling “look at the gringo!”

Doesn’t give me any envy to stop here.

Roads in Peru aren’t as steep as in Ecuador, following deep valleys giving wonderful scenery or taking their time in many laces going up a pass. Climbs are longer but less tiring. One day, on many occasions, a teenager rides with me. He is going back home by bicycle to the next village. We exchange a few words. The discussion is sometimes hard to start. I ask him what he is doing, if he is going to school (it’s holidays), or what he wants to do later (soccer player). One of them is a little bit more curious and ask me if I am not afraid of traveling alone like that without knowing where I’ll sleep at night.
— Because… the Devil can be there, he says.
— …
— But those things, they aren’t really existing? he tells me, half question, half affirmation.
He was waiting for an answer. I have no idea in which conditions this kid has been raised. I don’t want to pop his believes bubble. “It’s sure that if you believe in it and that you are looking for it, you’ll find it”. I didn’t know what else to say, and fortunately, he was arriving at destination.

That evening, I thought I would make it to Cutervo. I climbed for about 40 kilometers and after a downhill, an other climb surprises me. I won’t be able to make it before sunset. I was weaving through mountainous countryside, passing in front of house that looked uninhabited. No forests to sleep hidden. Street lamps (that I never seen lighted) were giving me signs that I should get close to the city, but my legs (and my moral) couldn’t anymore. Finally, I see a house with life, with a perfect spot to put my tent a little bit higher. I go down to the house to ask for permission and as I was going around the corner, the family enters the house and slap the door. I say “hello, I just want to know if I can sleep up there, the sun is set and I won’t make it before dark to Cutervo.” No answer. They hear me very well, mud and straw with a thin window, it’s not that soundproof. After many attempts to talk to them, I go back to my bicycle and wonder how I can set up without disturbing. And I almost don’t have any water left. And now it’s dark for real. I go back down and ask to whom who wants to hear if I can fill up my bottle with water from the outside tap, and I do it. I repeat that I am traveling by bicycle and that I can’t make it to Cutervo, that I’ll sleep up there without disturbing and that I’ll be leaving at sunrise. Finally, a man get out of the house. I might have two heads higher than him. Timid, round eyes, after many tergiversations, he tells me that the land up there is not his and that the owner isn’t living around. I thank him, don’t ask him for anything more, go back there and set up my sleeping mattress on a bench under the outside roof of the barn and fall asleep, wondering if they were believing that it was the devil who were coming to their house.

The effects of the treatment wouldn’t have lasted. I go on the next day, surprised by intermittent lower belly cramps. The next day, a charming pharmacist will recommend me the right treatment.

My digestive system is on fire, tires me and put on the line my patience and my tolerance. To those who yell me “gringo” I yell “latino”. To the dogs pursuing me, which before I was ignoring, but that now here are sometimes bitting my rear bags, I throw rocks or use my cayenne pepper that a man gave me in Northern Canada, enjoying seeing them stopping and sneezing. I stare at the kids as strong as they are fixing their gaze on me.

The cultural shock can happen to anyone, anytime. Most of the time, people don’t even realize it, just hating what’s around them. Peru is big. It will be long, if I don’t open my eyes better. 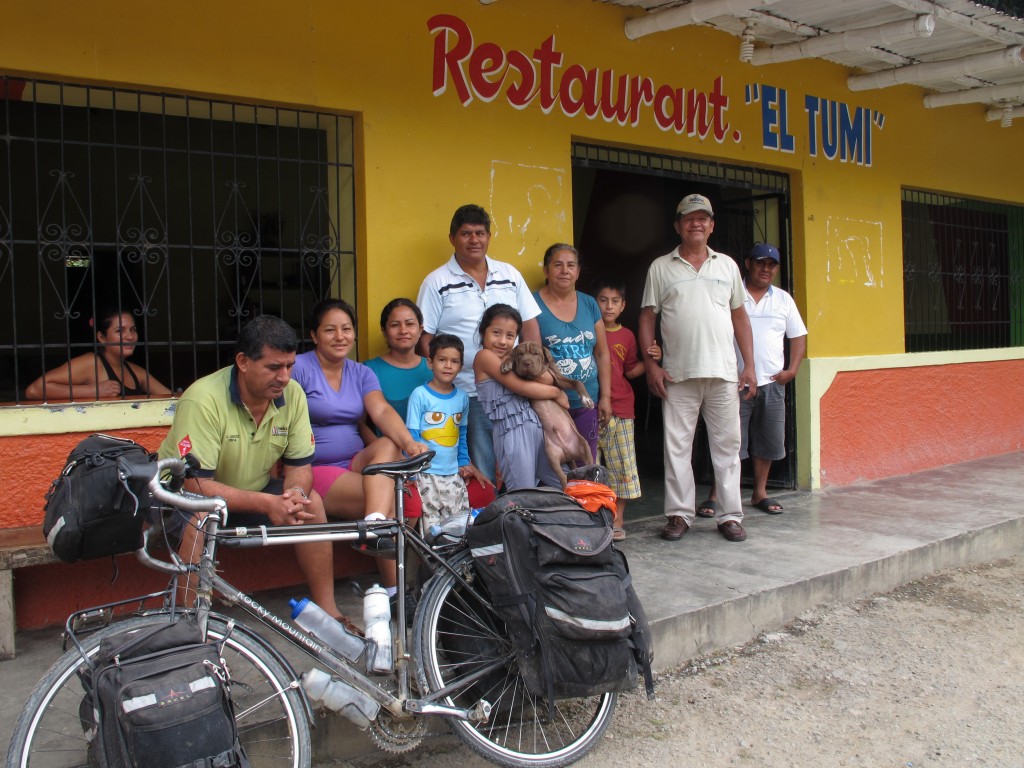