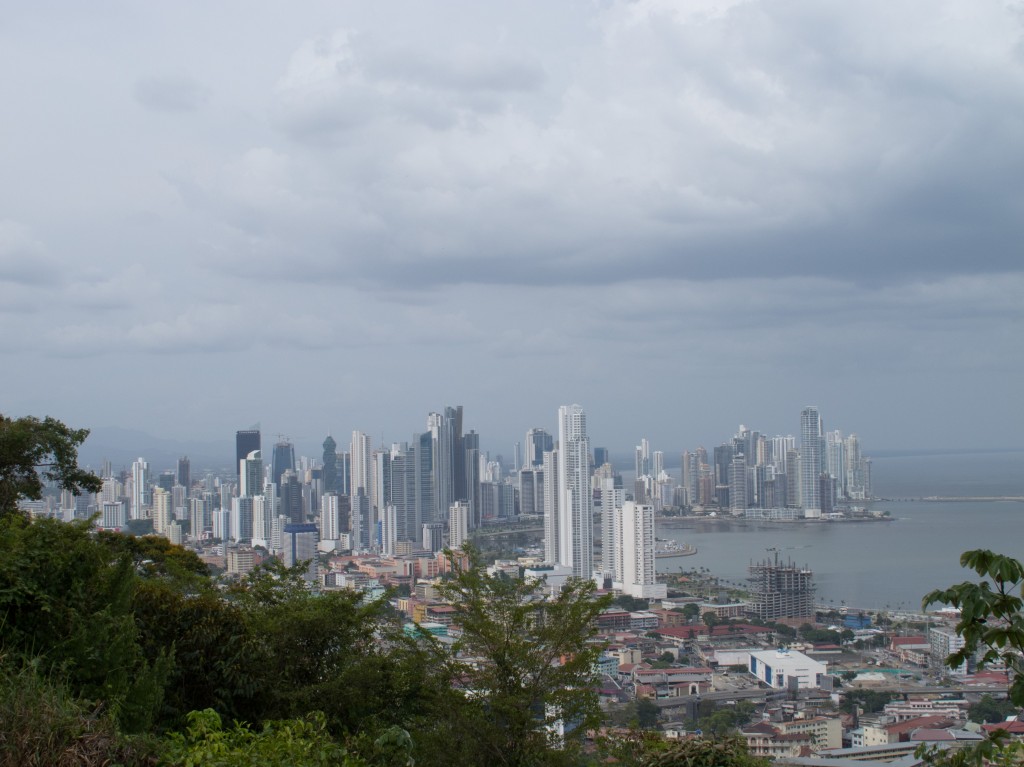 I was leaving Costa Rica telling myself that I would like this country to be bigger, so I could stay longer. Well my wish kind of got real as I had to go back there from Panama and spend a few more days. And that’s my bicycle that played the nasty one.

It’s been only a few hours since I was in Panama, entering by the easy going border town of Rio Serreno. So quiet that the money changers, those men walking around with a huge pile of cash from both nations and US dollars, aren’t even there. They let the job to the little supermarket hung on the border, not knowing very well if it is in Costa Rica or in Panama. I was able to get rid of my colones there.

An ingeneer forgot to take the time to draw the road on nice laces on the mountains slopes, the road just throwing itself in the mountain. I’m sweating, my legs hurt and my wheel start touching my brakes. My wheel isn’t true anymore, even though I haven’t heard the typical sound of a breaking spoke. Looking at it, it’s not the spoke, but the rim that is tearing of around the spokes. One is looking pretty bad, others are surrounded by cracks. After fixing all the components on this wheel, it’s the master piece that gives out. 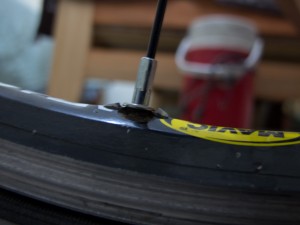 I went on this journey with wheels of a “700” size, as called in Canada, USA and Europe (or 28 for those Germans). Outside this area, common size is “26”, and they are smaller. I learned that quickly from other travelers on the road. But anyway, I have to make do with it and I have sturdy rims that will make the trip, I was telling myself. I didn’t know though that the first 750 kilometers of dirt road I did between Inuvik and Dawson will contaminate me, always searching later on for smaller roads not always easy, and not always friendly with my bicycle.

Costa Rica and Colombia being cycling countries, I was lucky to be in the area. Competition bicycles have wheels my size. However, they are made for thinner tires, mine being larger to take dirt road. As you could see in my latest video, it’s Rodney who was able to find a good sized rim in Costa Rica, while I was looking in Panama. It’s a kind-hearted man who invited me again to his home to fix everything. 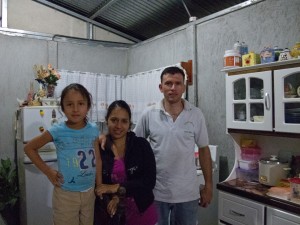 The border officers were quite surprised to see me again in Rio Serreno. Even the woman from the book store where I had to make a copy of my passport asked me : “And your bicycle?” I explain what happened, they stamp my passport again and here I am at Rodney’s house. When I came back from there, even the Panamanian militaries at the border asked me if I was able to get my wheel alright.

Unfortunately, this incident made me miss an encounter in Boquete with Fran and Larry those that we see in the video “Land’s Waves”, with whom I climb Cottonwood Pass in Colorado. They finished their Spanish classes they were taking in Panama and I couldn’t see them again before they went back to USA.

However, a CouchSurfer host invited me to his place in Panama City. I almost flew there in four days, doing respectively 145, 138, 137 and 96 kilometers, sleeping at a fire station, beside a restaurant and then in a campground close to a beach on the Pacific.

The friendliness of people in Central America goes on in Panama. Ramses make me visit the capital, which contrasts a lot with what I saw before with its tall buildings and huge publicity signs. We feel the USA influence, which lasted directly almost a hundred years, since Panama separated from Columbia to let USA build the canal, which was inaugurated in 1914. The last military went back home on December 31, 1999, Panamanians took back the control of the canal, which under USA was prioritizing military purpose over commercial. Nowadays, the commercial circulation (and profits) multiplicated and a third set of locks is about to be inaugurated next year, on time for the 100th birthday of the canal.

I spent 10 days at Ramses apartment, until I was able to get a way to go to Columbia. The Darién is the border zone between Panama and Columbia where about 100 kilometers of road is missing. Some says that the zone is so swampy than making a road is too hard, some than the area is full of narcos, FARCs and paramilitaries, other than there is still tension between the countries, (Columbia approved Panama’s independence only in the twenties helped by a little cheque from US as a compensation), but sure thing, there is no road. A cyclist in the seventies crossed the Darién Gap and here is an archive about it found on Youtube:

Today, Panamanian militaries just don’t let you through. A cyclist recently went to Yaviza, at the end of the road, and had to turn back. They don’t want that the international press talk about Panama as a place where tourists got lost in the jungle.

Still, apart from planes that I didn’t want to take, four options were there to go to Columbia.

– First, by the Pacific, taking small motorboats along the coast until Bahia Solano, in Columbia. From there a bigger boat brings you to Buenaventura. I considered this option, seeing on some maps that a road would link Bahia Solano to the rest of the country. But this road is a darkish project since 30 years, never finished, but apparently in construction right now and about to finish in two years. Arriving in Buenaventura would have been too far South and I would have missed a good part of Columbia.

– Second, by the Atlantic, and economic way is to take small motor boats through the San Blas islands, from Carti, until the border with Columbia (a good 12 hours, if not more). From there, other boats, brings you on the Columbian side on secluded beaches and a last 4-hour tough boat ride brings you to Turbo, linked by road to the rest of the country. If I was traveling only with a backpack, I would have considered more this option. I don’t really care about my comfort, but I do for my bicycle. Cyclists who went that way told me how they were worried by the state of their bicycles, jumping around and hitting the bottom of the boat at each wave, and splashed by salt water. Some had to do a lot of fixing back on mainland.

– Third, it’s possible to walk around marinas looking for someone ready to travel you to the other side on his yacht or sailboat. Generally, he won’t make it free and you have to share chores and costs. Traveling two, three or four people, it’s a great options, if the patience is there until you find the jackpot, as it won’t be over-costly. But traveling alone, it’s not as easy and affordable. 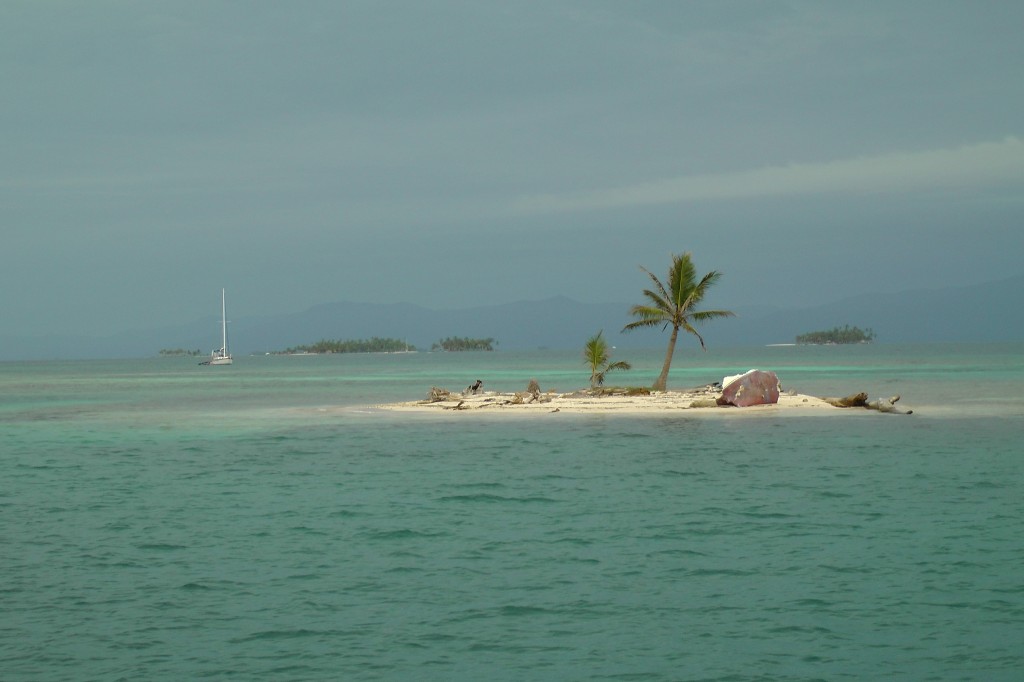 – Finally, the last option was maybe a little bit more expensive, but not as much if you consider everything you’ll have. And it was a wonderful surprise. Really. Many sailboats owners organize 5-day trips bringing people, mainly backpackers, between Panama and Colombia. You need to shop around, because captain and services quality will make the whole difference. I ended up being in a very good one. A German couple left their country more than 20 years ago, on a still-not-over worldwide tour, with the only thing they own: their sailboat. They stopped here for a while to make some money before going with the wind to the Pacific. Wonderful taken-care-of sailboat. Stops during three days on the San Blas islands and the Kunas communities. Amazing food. Quietness in my mind. Marvelous aquatic fauna and flora. The last minute of my video give a quick impression of it. It was a unique experience, distinct from everything I did so far, and that will stay forged in my mind. I don’t have any regrets, even though I learned I’m not much of a sailor, with nausea at first that eventually and luckily faded down a little bit.

Setting foot on mainland on a wharf in Cartagena, I felt happy and excited to start a new step: South America, and ahead, in a few hundreds kilometers, those monsters called the Andes, that will be part of my reality for many months, until Patagonia!