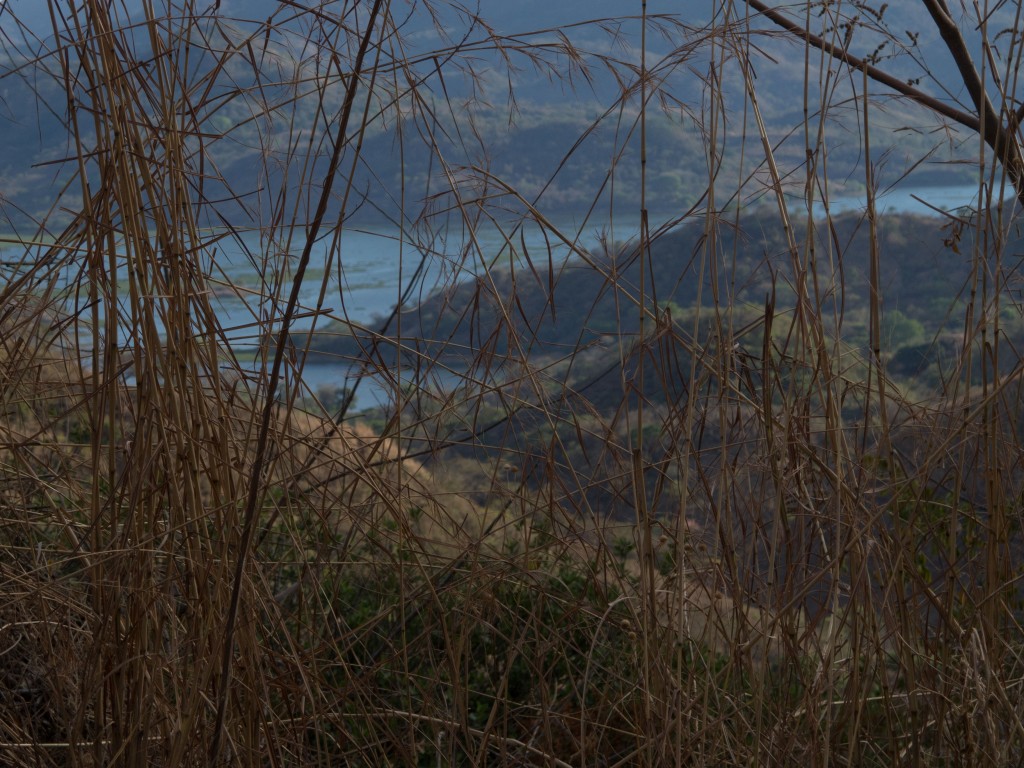 The border post of Anguiatu isn’t very used by cars and travelers. It is an important commercial road though. For 10 minutes, I was passing a long line of trucks waiting for their inspection. Hookers were saying hi from a high balcony and others were walking between the trucks. It’s a merchandise transportation’s parallel economy we should say…

I exchange what I had left of Guatemalan quetzals for American dollars. El Salvador got rid of it’s own money for Uncle Sam’s one at he beginning of the 2000. Here, I’m not yelled “gringo” at like in Guatemala, but they simply take for granted in the discussions I’m United Statian. “And your family in United States?” I’m being asked. “When are you going back to Los Angeles?”. On what I’m answering: “Why I would go to Los Angeles? Why do you think I’m from there?” “Because the people traveling by bicycle are from there” he tells me like an undeniable fact. And when I say I’m not from the States, I get an almost deceptive “aaah” without caring much of were else I would be from. I love those discussions on the road.

The day I was entering this country, I realized that I was the time soon to change my chain, an other 5000 kilometers about to be over. Getting in Metapán at the end of the afternoon, my chain simply broke up and lay on the ground while I was starting from a red light. Seems like it was time right now. The next day, going toward the farm, both my tires got a puncture: everything is happening at once.

Volunteering in the organic bubble

With all those problems that put me late, I called Mauricio while the sun was setting, a little before where I was supposed to initially meet him. He escorted me in the darkness to his farm, following his motorcycle, on long downhills from those dry mountains. 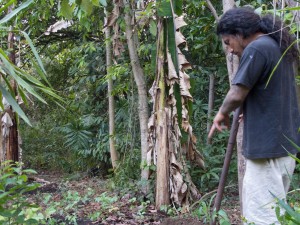 I woke up the next day in a little oasis, bird singing all around the fruit trees. Mauricio and Gloria call their property “The Organic Bubble”. Disconnected in luxuriant vegetation, we don’t need that much to get out. Permaculture is practiced, building “beds” to sow, made of dirt, compost, dead leaves and chicken shit. Vegetables are sowed on time intervals and never at the same place, to have a regular production and to avoid that illness and undesirable insects get used to get the same things growing at the same place.

They also practice some concepts of biodynamic agriculture, that works according to Moon cycle. The celestial body would have an effect on the plants and trees’ sap. I was there around full Moon, which is the best time for transplanting, because the sap is almost not in the roots. Water is not missing and I spend a lot of time watering. In wet season, which starts in May, this task is not necessary: we look at the plants grow! I ate like a king, I learned a lot during this week and putting my toe in the soil and get dirty was a lot of fun.

Here are some audio atmosphere of life at the farm, taken from my room in the morning, afternoon and night.

In a certain way, I got lucky to have a flat tire on my front wheel, a thing that rarely happened. Taking off my wheel, I realized that the shaft of the hub simply broke in two. The Guatemalan roads probably delivered the coup de grace. Mauricio gave me a ride on his motorcycle to the capital, San Salvador, zigzagging through the traffic, my wheel in my hand, to change all that in a reliable bike shop.

This motorcycle ride confirmed me that I’ll go around San Salvador through the mountains in the North. That was a good choice, because I discovered nice towns and generous people. Because of the heat, I imposed myself a rhythm of even-earlier-bird, in order to be on the road not too long after sunrise, doing as much as possible before it gets too hot.

While I was resting under the thick shade of a tree at the beginning of the afternoon, a woman showed up on the other side of the fence to give me water. Five minutes later, I was sitting in front of a fish plate with rice and vegetables with a big glass of fruity water. I had interesting discussions with her and her twin sons about their Mormon religion. I went back on the road while the worst of the heat went away. 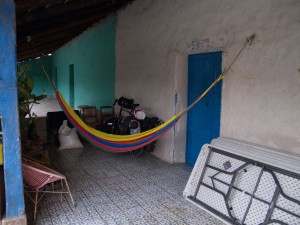 After a dozen of kilometers on dirt road, I arrived at sunset in Potonico. Peaceful atmosphere on the shore of a reservoir created by a dam. There were a mass at the church, the doors wide opened on the main square. I ask to the priest, while the believers were going back to their occupations, where I could spend the night. A family happily greeted me and even gave me food, offering one of their hammocks for the night, happy to share their reality…

Two days later, it’s my back wheel turn to be nasty: while I was going up a steep hill, a strange noise came up and my chain went between the cassette and the spokes. I put back everything to its place and realize that the free wheel of my hub is not free anymore. The hub mechanism that holds my cassette which make the wheel turn without having to paddle got stuck. I can’t stop paddling or the chain get crazy backward. Quite a problem in the downhills; I can’t rest my legs… neither my bums, as I can’t stand up while letting me go from time to time. Moreover, I realize later that the chain messed up the spokes. I can still go forward for now, but I need an important reparation, changing parts that I can’t find. Six days later, entering Nicaragua, I was still with this problem. The positive point is that the region was hit by an horrible cold wave, sweating at 25 degrees instead of a usual 35, and sometimes helped by a good wind. 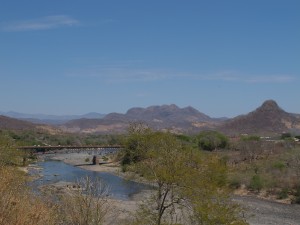 Crossing the little part of land that belongs to Honduras on the Pacific side will have taken me only a day and a half. It’s a shame that I couldn’t understand more this place, but I have to make road choices. Different atmosphere, heavier, more chaotic. Crossing Choluteca, 150.000 people, without any road signs, street names or street lights. The “gringos” yelled at me that came back. Those curious but suspicious eyes. This detonation that didn’t sound like the Mexican fireworks while entering Nacaome at the end of the afternoon. Those highly decorated machete cases that the men are carying. Those three military bases that I went along in only 150 kilometers. Many unanswered questions. I resign myself to be able to know more. I was successful avoiding the bribe the Honduran custom guy asked me and here I am, already, in Nicaragua.