I only paid for about 15% of my nights, mainly on national parks campgrounds. In contrast to Canada, National Parks offer reduced price for cyclists and hikers, for the entrance fees as much as campsites. Even if the “No Trespassing” and “Private Property” signs are scattered everywhere, it is only needed to venture in the National Forests or the BLM lands (Bureau of Land Management), which the itinerary of the Great Divide Mountain Bicycle Route takes advantage of, to be able to camp about everywhere without hassle. Otherwise, a future new residential development or a stand of interpretative signs about the region in a rest area will do…

I also had the opportunity to meet many people who hosted me, either via websites like Warmshowers or CouchSurfing, or simply by luck on the road. I actually spend about half of my nights in United States at local’s houses. This is what make you really experience the place you are at. Thanks you very much for those delightful moments!

A surprise in Pie Town, New Mexico, awaits cyclist on the Great Divide Mountain Bicycle Route (GDMBR) and  the hikers of the Continental Divide Trail (CDT). Nita made a house she owns available to those adventurers. We couldn’t meet her personally, but everything is there to make your stay comfortable in Toasters House. It’s at the pie shop (it’s not called Pie Town for nothing), that we learned about this special place. The “Pie Town’s vortex” swallowed us and it’s after three nights that we went back on the road toward Gila National Forest. By the way, I want to take the time here to raise my hat to those “thru hikers” that are linking the Mexican and Canadian borders, walking over the mountains. I am amazed everytime I met those long distance hikers. We met Chad at the Toasters House, who, after doing the CDT from South to North, went back here to complete a six-day segment he missed as a forest fire was ravaging the area. Me too I wouldn’t be able to sleep well back home knowing that I skipped a part. And fortune made us meet him again at Gila Hot Springs (see below), on his side after six days of walking and on our side after 4 days of bicycle on a little bit longer route.

Eating all the calories burnt in a day, this is not easy. I try to dip in oil, butter or mayonnaise about everything I eat. Bread got traded by tortillas more I was going South, which are easier to carry. The Canadian morning oatmeal was continued in United States, but with new flavor from the grocery homebrand: what a change! Cheese is really cheaper than in Canada, and I don’t hesitate to eat it with everything. I was amazed by all those new candy and chocolate bars, but nothing in those attractive empty calories worth my traditional “caramel-chocolate-peanut-nougat” bar that I will silence the commercial name and that pushes me for a few kilometers. I got used to the double-daily tea from Jörg, morning and evening, but I only kept the morning side of the process. A few times, a second quite American cheap and fat breakfast was a pretext to take a break at mid-morning to completely warm up from the cold night. Peanut butter is always calling present and I am wondering if I’ll still be able to eat spaghetti (and oatmeal) when all this will be over. But for now I always appreciate what I am eating, not being capricious when hungry.

Unfortunately, by bicycle, you can’t see everything! A place an hour away from the main road by car worth a bike day to get there. I’ve still been able to create an itinerary passing by quite wonderful places. Here are a few hotspots of my itinerary, going through visit-worthy national parks or by breathtaking scenery areas.

In the end, I used nearly 45 % of this itinerary created by the Adventure Cycling Association going along the Continental Divide through Montana, Idaho, Wyoming, Colorado and New Mexico. More details about this route can be found here.

Crossing this National Park is a wonderful day. It is more easy to do the Going-to-the-Sun Road from East to West, like Jörg and I did, which offers a bigger downhill than uphill… and such a downhill! You can experience this downhill in a timelapse at the beginning of the video “Tunnels”. Plan carefully though, as there are certain restrictions from June 15th to Labor Day because of the heavy touristic traffic. A part of the road is closed for cyclists from 11AM to 4PM. You then have to pass it before or after or stay at the campground nearby. An other restriction apply only for the eastbounders. Details are here.

A playground for me. I took the time to visit well Yellowstone. September is a great time do be there, July and August being very busy. Therefore, many campgrounds close in late September, making a visit by bicycle latter in the season a little bit more complex (and colder). Discovering this park by bicycle is quite advantageous. No need to make a reservation for campgrounds because some sites are specially dedicated to cyclists and hikers, and no hassle to find parking! There is something to see every 5 kilometers! The southern loop has good shoulder, but the northern loop hasn’t, so it is needed to be more cautious.

If it’s solitude, open spaces and the fact of seeing more animals than humans that please you, the backcountry roads I took after the National Parks in Wyoming has to be taken (see map at the end of the article). Wyoming is the less populated state in USA, so going through the backcountry is a really remote experience. To be seen in the first part of the video “Land’s Waves”.

Different side trip but as worthy of the one I did to Stewart, British Columbia. Pablo and I were following the GDMBR at that time, that we left after going through a wonderful section. The historico-cultural reason for this side trip is the Gila Cliff Dwellings National Monument: 700-year housing from the ancestors of the Pueblo native nation, built in big caves on a wonderful cliff. This site, still with his mysteries, is accessible by a little trail taking less than a hour to go through and the entrance fee is $3. The entertaining reason of this side trip are the hot springs, that can be accessed from the campgrounds, for $5 (including the night). For a more remote experience that we haven’t done, Jordan Hot Springs can be reached by a few hours hike, and it is recommended to spend the night there to enjoy the site.

This detour is not an easy ride though, as the map above can show. But the fact of knowing that you can relax your sore muscles in hot water when you arrive cheers you up to go over those mountains… and make you hesitate about leaving the next day. It is not necessary to go back all the way from where the GDMBR was left by taking an other road, as much hilly or even more, to Silver City.

It is quite paradoxical to finish the GDMBR, renowned for it’s sensational elevation gain and bumpy roads, by getting transported by long straight stretches of paved road for the two last days. The border station of Antelope Wells is the less frequented of the USA-Mexican border. On the road to get there, via almost-ghost-town Hachita, we met more often Border Patrols, searching for illegals crossing the border, than regular cars. Right on the border, no villages on either sides. We asked the custom officer if we could sleep somewhere before crossing the border the next morning, in order to get before the next night to the first Mexican village, 80km further. He let us sleep in front of his house, while giving us ice cream, pops and watermelon. Tim is the only permanent custom officer in Antelope Wells, a partner being “shipped” to him from El Paso or Douglas. At 4PM, when the border closes until the next day, the devoted man gave us enough food to cook two meals. The next morning, while it was his day off, he went to the custom office to cook a giant breakfast for his workmates and us. We then enter Mexico with a full belly, leaving behind a wonderful last impression of United States. 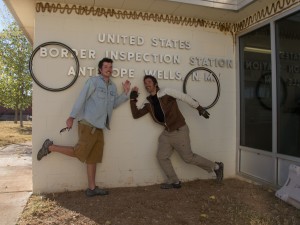 Click on the links below to see complete photo albums: