We arrived at the corner of the Cassiar highway the fourth days after we’ve left Whitehorse, on the Alaska highway. That day we just entered in British Columbia, three or four kilometers after the intersection, then set up camp a little bit further by a lake.

What we were passing by on the Cassiar was marvelous. First, we were biking through a burnt forest from last year, where magenta flowers where spreading all over. The forest came back in all its vitality with its humid pine smell. Then, the road was winding through mountains, over deep river valley worked by the modern man of the 19th century looking for shiny metal.

And all that was only the first day on the Cassiar. We settled for the night by a jade shop in the middle of Jade City, a place composed of the shop and two or three deserted buildings. Max, a Russo-Moldavo-Newyorker traveling from Deadhorse Alaska to Seattle, caught us up that evening. We will share the road all together the next day, but he will spend one night only in Dease Lake as we have spent two.

Clayton was our saviour in Dease Lake, the Cassiar’s “big city” with 400 habitants and the only grocery store worthy of a name on the road. The last shower we had was six days ago in Whitehorse. The campground was looking like a parking lot with pit toilets. This guy was passing by on his bike, baseball cap and mustache in the wind, and I asked him were we can put our tent for the night without disturbing anyone. He showed us the baseball diamond and talked about the cafe on the other side where they have showers.

Our happiness about having a good shower died quickly when the sullen woman with a cigarette voice wanted to “sell” her shower for $10 each. And we would have to take it in the next 15 minutes as she was closing the shop. It was out of the question for us to pay $10 for a shower. While that woman was locking the door behind us while there were still people inside, 15 minutes from closure time, the same man showed up again on his bike. I asked him where was the closest lake, setting our mind to go back to usual cleaning procedures. He invited us on his land, where there is an access to the lake and where we would have been able to set up our tents by it. Finally, while the discussion was going on, he offered us his roof and his shower, in his mobile home he proudly acquired two years ago. We cooked for everybody and spent a wonderful evening talking and learning about local stories, from salmon fishing that abounds at the moment, to moose hunting and how to cook his guts, and those bears roaming around fishing camps which the teddy bears we saw along the road were nothing compared to them.

Dease Lake was also the place to get more information about this trail that I had in mind. First stop on Sunday morning by the lady who manage a souvenir shop where the sign indicated “tourist info”. We found a map of the Spatsizi Plateau Provincial Park with the beginning of the trail, called BC Rail Grade. Further south of the park, nothing was shown, and the woman couldn’t tell us more except of a possible washout. Internet would be a better source of information, but finding a connection was challenging. The cafe where we were not welcomed was closed on Sunday, the hotel wanted to charge us 10$ for 100 megabytes, but it is at the restaurant which was falsely announcing fresh bakery where a young waitress whispered us giving the password for the library’s WiFi. It was closed on Sundays, but we could get the signal from outside.

Even though we finally got Internet, we weren’t able to know much more. On a forum, a man was publicly telling his experience on the BC Rail Grade by motorcycle. He had to turn back where the trail was in terrible condition because of heavy rain. Google Earth confirmed the existence of the trail, but blurry satellite images on a section was leaving much to the imagination. Wikipedia indicated to us that the BC Rail Grade was an abandoned railway construction project between Dease Lake and Prince George. The provincial park website made us aware of that washout which gave an impossible access to vehicles to the park. But could we consider our bikes as vehicles? Couldn’t we go around? The website was also saying that we could buy detailed maps at the office in Dease Lake and was giving a phone number to get more info about the washout. We then had to wait to Monday when Services BC offices will open. Clayton happily agreed to host us an other night while Max was already gone on the Cassiar. We bought provisions for two weeks of dried food to get ready to leave the next day.

The answer the next morning at Services BC was short: no. No there is no more maps produced, no there is no more information about the trail. I tried to call at the phone number left on the website, without success: the options available on the machine were not working and was exiting out of the system, cutting off the line, even though it was referring to a BC Parks office in Dease Lake. The woman at Services BC, who didn’t think about refering us to BC Parks while we were looking for information about the Spatsizi Provincial Park, sullenly told us how to get there, without hiding her annoyance when I asked her to repeat directions.

While we were leaving the office, I turned to Jörg and asked: “haven’t we seen her before?”. Deja-vu impression… This ashtray voice vibrating in my head… it was the same woman from the cafe, who knows for which reason she was working as well for an other job where customer service should be a priority. Poor citizens who have to see her everywhere… There are secondary characters like this on my travel that will leave their trace; she’s part of them.

Anyway, there were nobody at BC Parks’ office but I found the park officer’s phone number. The voicemail was telling me that the position was vacant and gave me the information to send out my application.

So it was with those pieces of information that we got out of Dease Lake, to go to Tatogga Lake, just by the beginning of the trail. The lodge manager wasn’t very optimistic, talking about a bridge which felt down and a washout where not even a horse could pass. We had been told so many different stories that we decided to go see for ourselves and take a decision once we got there.

The bridge was fully there. A few kilometers further, the river washed out a part of the road with the current. We were barely able to cross the washout by foot, and only by balancing on fallen trees. It would take five to six crossings to get all the equipment on the other side. Ahead was 500 to 700 kilometers of unknown terrain on this little trail; and two wolves, surprised at seeing two humans walking out of the river. Were there other washouts further down the road? Would we be able to cross the other rivers where there were no bridges? We had food, but no maps. Our bikes might not have been equipped properly to tolerate this kind of road.

Jörg wasn’t fully motivated to do it but didn’t want me to go alone. If something would happen, we were hardly reachable. Then he got to the point:the objective is to go to South America, not risking getting hurt or breaking equipment and not even be able to get out of Canada. It’s useless to “oversurpass” ourselves. Just surpassing should be enough.

When it come times for hard decision like that, fortunately the chosen option always bring something pleasant in the end. If we hadn’t have turned back on the Cassiar, we never would have taken a sidetrip to Stewart, off the main road more in the south. 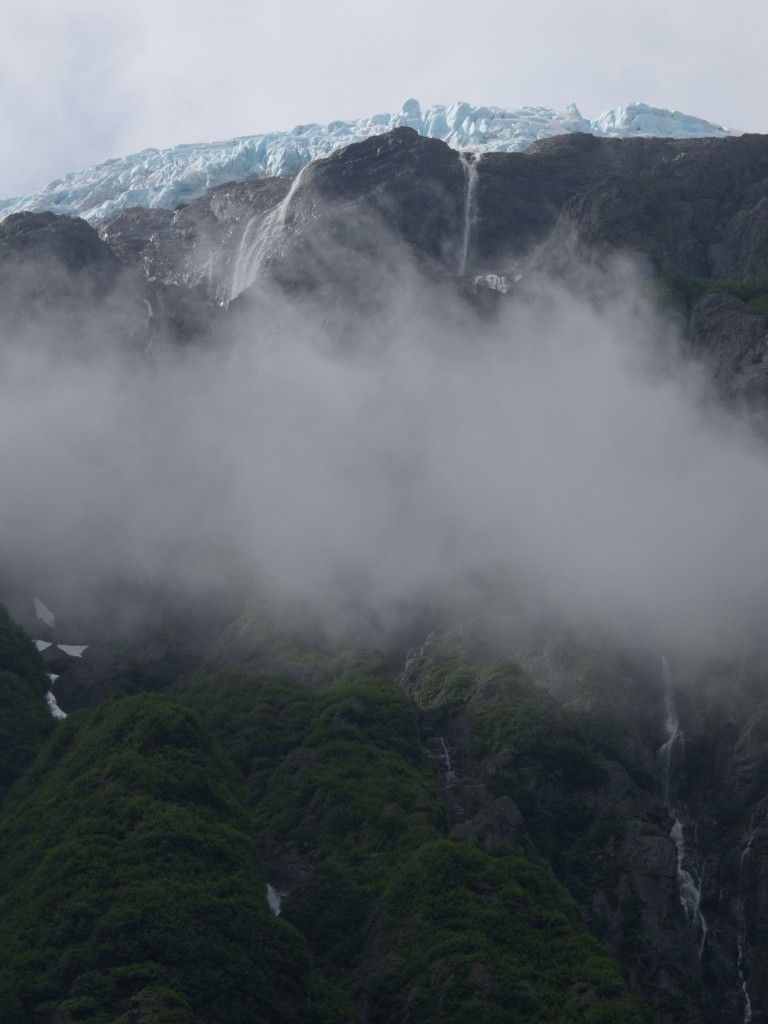 A little village with a population fluctuating with mining hopes, situated at sea level and beside the near-ghost-town of Hyder Alaska, Stewart seduced me. Even more the road to get there, where water was pouring out the mountain slopes topped by pale blue glaciers.

The last 100 kilometers on the Cassiar was not the most exiting though, biking through a regenerated forest decorated with signs to tell us when trees were cut and replanted, in a brave effort of public relations from the forestry service.

The Cassiar behind us, it’s now onto the Yellowhead highway that stretches eastward. Traffic is intense compared to the quieter last days. The road has a sour smell that I am not able to identify. It changes from the sweet smell of wild strawberries and humid pine trees from the Cassiar.

The road to Prince George was relatively good, pushed by a warm wind and the amazing passage of regular villages every 30 or 40 kilometers. Northern BC’s capital with its 80 000 habitants, Prince George will probably be the biggest city I’ll go through in Canada. It’s time to change the tires worn out by gravel roads up north and install a new chain to avoid braking the speed cassette. Kent and Ginger, our fabulous Warmshowers‘ host, offer us the perfect conditions to rest a few days. Since Whitehorse, we have only taken two days off.

The Rocky Mountains are now ahead, a few pedal strokes from Prince George, and those will be my companions until southern USA.