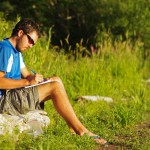 Canada was the biggest country to go through of all CycloExpedition Americas. And it’s already done! From north of the Arctic Circle to the 49th parallel, I crossed breathtaking scenery, a little bit more boring forests and small isolated villages. I met Canadians adapting to their environment, tourists daydreaming about open spaces, well-fed bears, curious wolves and voracious mosquitos. More I was going South, villages were getting closer, groceries more frequent, mosquitos more friendly, bears were considering more like an enemy to be afraid of than a simple neighbor. More I was getting forward, more I was feeling that the human being was separating from nature, reaching its climax, paradoxically, in national parks. To explain, let’s refer to an article written by Alvaro, a cyclist going all around the world, met two times already.

I’ve met many others cyclists wandering around like me! The weather window in northern Canada and Alaska is thin, and roads options are few. It’s easy, if we don’t just met, to hear about those others “crazy guys and girls on bike” that are a few days before or after us. 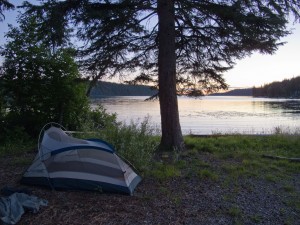 I was lucky to be hosted a quarter of the time by family and friends in Dawson, Whitehorse and Banff. About ten nights has been passed with Warmshowers hosts or people simply met at the grocery store! More than 20% of my nights were by the side of the road, in the forest. It is very easy to find spot to put your tent. You only have to make sure to not be visible from the road, to put your food and garbage far from the tent and to leave the next morning has if you have never been there. Bear protective garbage bins are regularly found along the road, so garbage don’t have to be carried out for too much time.

An other quarter of my nights has been in paying campground. They were public campground from provincial or national parks. The Yukon offers self-registration basic campgrounds which have water pump (that need to be treated) and dry toilets for $12. In British Columbia, the provincial parks are 16$ and offer drinking water. Shower has to be taken in the lake or the river! I rarely ended up in those places, as you could do the same for free elsewhere. Most of the campground I went were in those big national parks where sleeping outside a delimited square can be an offense by a passing ranger. However, we were traveling there during peak season and unlike United States National Parks, campgrounds don’t have hike and bike or walk-in sections for unmotorized people, except the ones by Jasper town and Waterton Lakes. We were often arriving there while the campground was full. We had to explain to the ranger that we can’t go to the next campground like those cars, and that if he refuses us in his campground, we will go sleep in the forest, a thing that he doesn’t want neither. We had to make him understand that we can set up our tent outside the numbered lot, and then, he wasn’t harassing us to pay, probably because we couldn’t fit in any line of his form.

A great discovery was the Recreation Sites in British Columbia. Those sites are taken care of by the users and managed by BC’s forestry services. They are basic campgrounds (dry toilet, picnic table sites and sometimes a garbage bin), but free, in a peaceful setting by a lake or a river. Tourism offices don’t talk about it too much, preferring to send you in the commercial sites, and they don’t have any repertory of them. Even by bike, they are sometime hard to localize on the road. You can find a online repertory online here.

I am more and more getting used to my oatmeal in the morning! Fast and filling, even more when you eat it with a few scoops of peanut butter! I quickly got fed up of those salty and flavored instant rice. Thin spaghetti became a good substitute, with tomato sauce, a vegetable, canned meat (tuna is a sure bet, ham is passable and chicken, never again), and sliced processed cheese if I am lucky. For lunch, bread, tomatoes, sardines, carrots. In the Great North, where fresh food was harder to get, I often had to take out my camping stove for lunch and cook something. Now that groceries are more frequent (and daylight hours shorter), lunch is taken faster, without cooking.

You have to be well prepared to go along the Dempster by bicycle. Only the first 10 kilometers while getting out of Inuvik and the 5 kilometers before joining the Klondike highway are paved. Two small Natives villages are located on the first 150 km in the North, and then nothing, apart from a lodge about in the middle of the Dempster. You just have to go to the road rhythm, dictated by mountains and the weather.

A pleaseant stroll compared to the Dempster. But it is still the Yukon: villages are not frequent enough to offer services to drivers, so you can find along the road some lodges, kind of general store with lodging, restaurant and gas station. Don’t even take the time to stop in Stewart Crossing, they won’t even want you to fill up your water bottles. Pelly Crossing is however a nice Natives community with a reasonable grocery store and a free campground across the street with a shelter, that was quite useful in my case as pouring rain started and lasted for hours when I arrived there.

Former forestry road that got paved through the years, this 720-kilometer road will be entirely paved by the end of 2012, the last surfacing work being done while we were there. The yellow line in the middle of the road is generally non existent, the road being not that large. But it is quite rare to see two vehicles crossing each other in front of us. Here again, planning is important. There are only two real groceries, in Dease Lake and Iskut. Good Hope Lake sells a few canned food. Otherwise, lodges sell junk food like chips, pop and chocolate bars. If you don’t bring enough food from Whitehorse, you might have to do the 20-kilometer detour to Watson Lake before undertaking the Cassiar. Look for Recreation Sites along the way (like mentioned earlier)! The detour to Stewart really worth it, if you are ready to bike 120 km back and forth. The scenary is jaw dropping, the wind will slow down your downhill but will help you to get back up on the main road. Moreover, the village offers all the services, including free WiFi!

Slow ascension toward the national parks, with a few tougher uphill along the road. It was the first time I felt traffic that much! Apart from a few rougher sections, the shoulder was garnished with a anti-sleep rough strip and was separating us from the traffic. An other strip was often over the yellow line, and vehicles were vibrating on it every time they were going around us. That louder sound was making the days psychologically harder. Maybe that I would go back today and it wouldn’t be that worst than in my memories, but at the time it was a big contrast after 2000 kilometers of relative tranquility. Villages were found every 30 to 40 km, so planning wasn’t really necessary on that road. Prince George, with its 80.000 inhabitants, was the biggest city I went through in Canada.

Well known route, this classical itinerary between Jasper and Lake Louise is taken by many cyclists, even though Jasper and Banff national parks don’t make it easy for cyclists and doesn’t promote the use of none polluting vehicles. It is a good thing to take the time to stop in the many view points and even leave your bike to wander in a few hiking trails. The Lake Louise visitor center will happily keep your panniers while you go up to the lake without weight, and why not all the way to Morraine Lake, 14 km further. Four days are usually enough to connect Jasper to Lake Louise, adding an other day to go to Banff by taking the 1A, avoiding the busy Trans-Canadian highway. On the last kilometers between the end of the 1A and Banff, a bike path will bring you right in the center of town.

From Banff to Waterton Lakes via Elk and Crowsnest Pass

Out of the beaten path, this road is quite a contrast after the busy Icefield Parkway. We tried our bikes on the Great Divide Mountain Bike Route (GDMBR), an itineray made by the Adventure Cycling Association. It follows the Great Divide all the way to southern United States and maybe will be often part of my own itinerary in Uncle Sam country. The Canadian part goes through Spray and Goat Creek trail, that are starting just behind the Banff Spring Resort. After, it goes on the gravel road 742 that brings to the unknown Peter Lougheed Provincial Park, in the shade of its national neighbors, but also marvelous. The Elk Pass Trail makes you cross to British Columbia in 10 km, where a car would take 300 km to get to the same point. However, it is a hard 10 km, with a uphill as difficult as the downhill, which is under power lines. From there, you have to follow a forestry road going slowly downhill along the Elk River, all the way to Elkford. The road is then paved to Sparwood. Many Recreation Sites are scattered along the 70-kilometer gravel road; one is even having a little cabin at km 160. From Sparwood, we left the GDMBR to go over Crowsnest Pass, on highway 3, and go back in Alberta, toward Waterton Lakes National Park, where the Prairies meet the Rockies. A little bit after Bellevue, it is possible to cut through highway 507, much more quieter than highway 3, and to join again the main road at Pincher Creek. Out of Waterton Lakes Park, don’t believe you are in United States yet: a big uphill awaits you before arriving to Chief Mountain custom post, open only in summer.