It would have been even more easier if the rain and the wind wouldn’t have played with me. But compared to the Dempster highway and probably what’s awaiting me in northern British Columbia, those 6 days of biking on the Klondike highway were quite sweet. 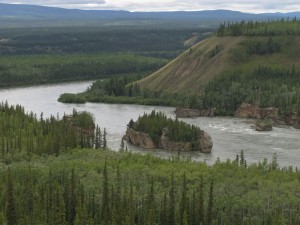 I was able to go faster than the last part of the road, thanks to the pavement, except in a few sections where gravel was back. Two villages were on the road, so I was able to get food easily and other service stations were scattered here and there. After a dinner on the side of the road, I was biking a few more kilometers to set up my camp for the night. 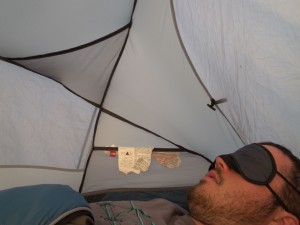 A useful tool to sleep better in the northern nights!

Moreover, it was easy to leave no trace and get rid of my garbage thanks to the frequent rest area along the road, equipped with anti-bear garbage bins.

The sun is starting to set! The first days were quite cloudy, but they were getting shorter. Going South gives me the opportunity to witness my first sunset of the trip, around 11 PM behind some mountains at Fox Lake, about 70 km north of Whitehorse. That day, a German cyclist catch me up while I was sitting at Breaburn Lodge, renown for its cinnamon buns as big as my head. We finished the way to Whitehorse together, and we’ll go on for a section on the Cassiar highway.

Such a pleasure to arrive in Whitehorse, that has everything of a big city, being with its 25.000 habitants the Yukon’s capital! Such a pleasure to see affordable prices in the groceries! The resting days at one of my friend’s sister let us time to get full on food reserve and supplies, that will be quite useful.

The next 1640-km segment of road that will bring me to Prince George, British Columbia, can be divided in three parts:
– 430 km on the Alaska highway, a “motorway” if we compare it to Yukon’s road system, where there will be many service stations, but with pricy stuff.
– 720 km on the Cassiar highway, the biggest part of the segment, that will bring us through northern British Columbia, where services and villages are few.
– 490 km on the Yellowhead highway, which will slowly bring us to bigger villages and make us enter in southern Canada.

The whole thing should take more than three weeks to complete! So news won’t come out on the website quite often. Look at the Facebook Page, where short notices could appear if I have access to the electronic world! Without having a Facebook account, you can still know what is published there at the bottom of the homepage of CycloExpedition Americas’ website.