January 2011. I was finishing a student exchange term in Barcelona. It’s from this little balcony of a room on Las Ramblas, that I have rented from a friend for a few weeks between my autumn flat and upcoming European adventures, that I took the decision to leave again the next year. Speaking now with more fluency Cervantes’ language, there were no more reason of not doing it. Before it gets too late. It might have been Christopher Columbus, at the end of the street, who convinced me… 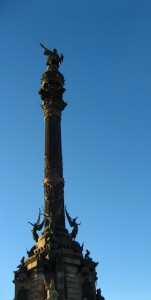 I unfolded the maps an drew a line. Not along the west coast, but through the mountains. Why do something simple when we can make it complicated? I wanted to follow that dotted line named “Great Continental Divide”, this line that separate the big watersheds of the Pacific and the Atlantic. I wanted to bike through the mountains, go over passes. To those who say that I’ll go uphill a lot, I’ll answer: “what goes up must come down”.

If it’s in Barcelona that I took the decision, the idea came from further back in time. 2005. It’s been already more than three months that I was crossing Canada on bicycle from East to West, with my good friend and road companion. The trip was ending. We were going over our last passes before going down in the valley that would lead us to Vancouver. It’s during those last kilometers that we said to ourselves, joking a bit, that after crossing the continent from East to West, we will have to do it from North to South. There were this crazy idea, and also this one of coming back in kayak from lakes to rivers after a winter in Vancouver. The kayak idea was never realized, the option of doing 3 days of bus was wild enough after 4 months of biking, and the day to leave again on two wheels was stuck under the pile of things to do while we were starting the project to get a little bit more educated in Montreal.

6 years later, I have the occasion, the possibility, to take the time, even if a little voice tells me that this it’s now or never. Whatsoever, retirement will just wait a bit longer… if, anyway, we have retirement when it will be our turn.