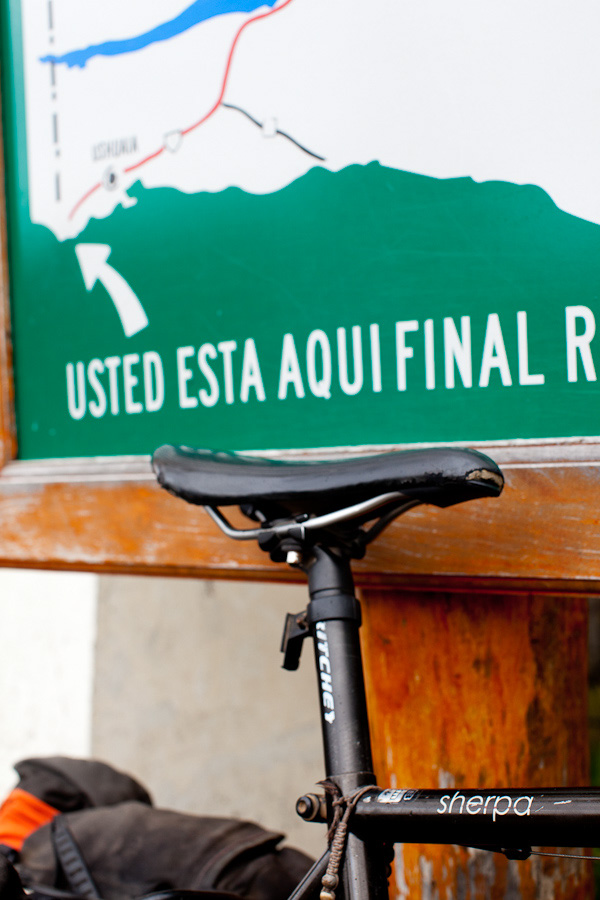 About almost two years ago, a last downhill was bringing me into the port town of Ushuaia, southernmost Argentinian settlement on the Beagle canal. Sometimes I forget about it, sometimes memories hit me back in the face. Oh, yeah, true, I cross the Americas by bike! I had more than 30.000 km behind me, shared with about thirty people met on the road or in the biggest of the solitude. All those kilometres put on a map look like that:

Moreover the physical challenge, it was also a video project which I could express to many a part of my experiences through 18 videos edited on the road. It was also a charitable project: thanks to the donators that supported the cause, 2.200$ has been given to Equiterre.

I’ve quickly been caught by the reality of coming back: job, finishing my studies, more work… I didn’t stop going one place from an other, but in different contexts. Some were asking me if I wanted to write a book, speak on conferences, edit a documentary. I want to answer “yes, right now!”, but once the return decanted, other projects passed ahead. I raise my hat at those who after a project of the kind, worked hard to keep the momentum and put the ressources in the creation of such medias. I would like to have taken the time to sit in front of a computer stronger than my little laptop that bounced up and down Americas’ roads, find a storyline and an interesting angle to build a quality document.

But still, my stories made a bit of a way after I came back. I did interviews at Radio-Canada’s radio, one of them in Spanish. Two of my videos have been shown in USA: the intro of Cowboys Amateurs was presented at Portland, Oregon Filmed by Bike Festival and I like, at Arlington, Massachusetts Ciclismo Classico Bike Travel Film Festival. More recently, I was on French TV, in a remake of US kind of show of travel misadventures. It was aired on a specialized travel channel in France. This brought me to Paris to do the studio recordings, while at that time my steps and my heart brought me to live in Barcelona to finish my online classes to get my degree. The result, if you understand French:

In Canada, I was often asked how I can economically travel that long. My answer looked like: “Some people has a car, some people travel a year and a half on a bike”. In the United States, I was asked instead what was happening with the money I was NOT making while I was traveling. A lost of time, right? I didn’t have much to answer to that philosophy of “you produce, you consumes or you’re nothing”, but I can tell them now that I have a job because of that project, actually. I now work as a tour leader for an active travel company, doing biking and hiking trips. It’s in the Rocky Mountains that I knew about the business thanks to one of its employee. I passed the hiring process and here I am paid to be on the road. And thanks to my experience in Latin America (and the language learned), I quickly earned the position of the person in charge on the ground for a tour that the company has between Bariloche and San Martin de los Andes in Argentina.

So if crossing a continent by bicycle was an inefficiency and a lost of time, I would be quite happy to do it again. To do it again?