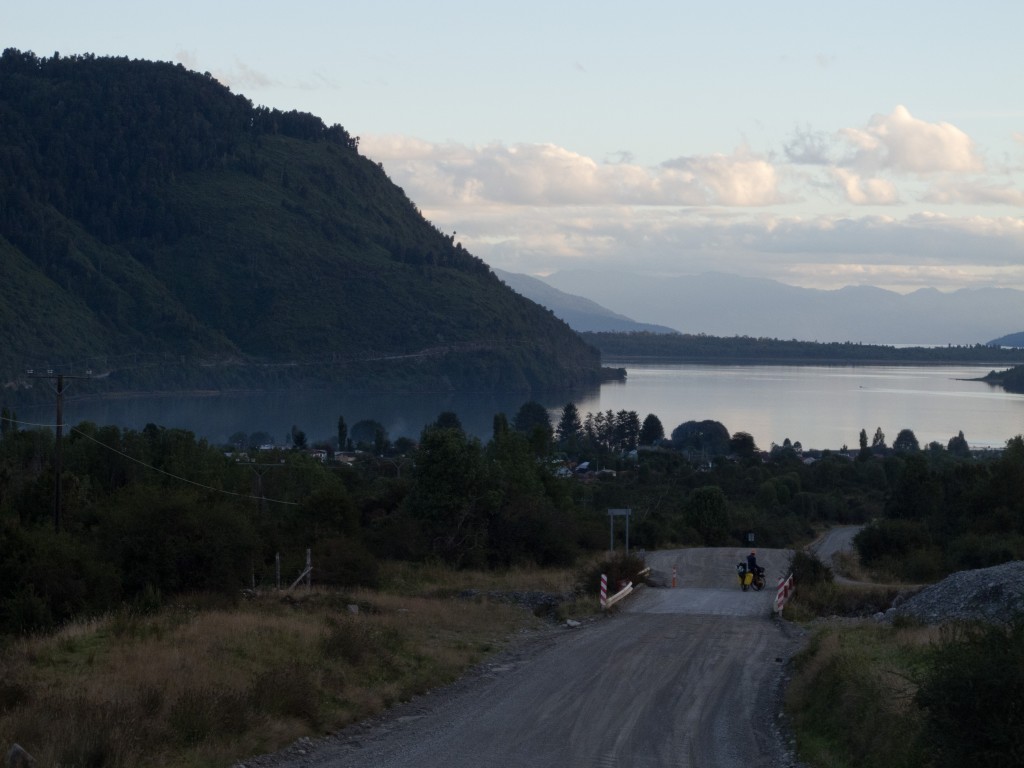 We can’t hide it, our last experience in Chile didn’t make us overwhelmed to go back to Chile. Already we knew that we’ll miss pastries and good bread, cheaper food and more courteous drivers. But anyhow, we can’t miss the famous Carretera Austral that I heard about since I started this trip in Canada. At least, the summer holiday period is over, so we can hope for less people on the road. More and more people, including cyclists due north, tell us when they learn that we are going to Ushuaia that we are a little bit late: “it freezes at night sometimes” or “oh! it snowed up there a few days ago (in the mountains)”; in short some stuff to cheer us up.

The three first days will be done without Guillermo. Some people that I traveled with further north and passed by here a few weeks ago told me that a good segment was in horrible construction, very rocky and totally demoralizing. Guillermo preferred to hitch a ride and relax further waiting for us while Christian and I will fight the road. 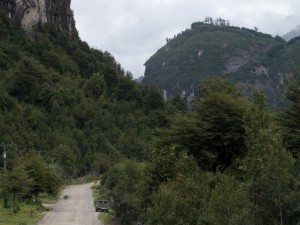 Getting to the Carretera Austral from the border town of Futaleufú took us a day and a half in a wonderful scenery, going along a roaring turquoise river. The Carretera Austral stretches over 1250 kilometers from Puerto Montt to Villa O’Higgins. From there, the cyclotourist generally takes two boats separated by a bumpy track to get to the Argentinian side, near El Chaltén. But as we are a little bit late on the season, we would have to paddle days and nights to get there for the last boat. Southern Carretera Austral will be for an other time.

From Santa Lucia, where we meet the Carretera Austral, should start the predicted hell, but to our great surprise, the big rocks and sand were all compacted and even a small stretch got it’s first asphalt layer. In short, it wasn’t that bad. We meet Guillermo in Puyuhuapi, telling us that in the end, apart from the first segment to Santa Lucia, he did all the rest on the bicycle, only about 50 kilometers ahead of us!

It was beautiful. Very very beautiful. Let’s the images talk for themselves and look at the last part of the most recent video (at 6:05) and the photo album related to this stretch of road.

But well enough, with more than 28.000 kilometers on the legs, it’s not just a snowy mountain, a turquoise river or a glacier that make the moment exceptional: people worth a lot in the balance. I don’t know if it’s because on our side we were exalting joy of being in such a majestic place that it was making it a bigger contrast, but people here seemed to us being sad. Sad and bitter. Chile is maybe the richest country in South America (GDP per capita), but it proves here that wealth doesn’t bring happiness. There are sometimes exceptions of course, wonderful people who make that I won’t go in the details of other unjoyful experiences.

So for a second time, we avoid an additional detour, desired at first, to go back faster in Argentina. But before that, we pass through two casa de ciclistas, almost obliged stop which that every cyclist we met told us about. Those men in Mañihuales and Coyahique who offer a roof to travelers on bicycle are exceptional human beings: because the Carretera Austral has it’s load of cyclist. A lot. Over all the season they had people home. Of every kind. Who doesn’t always smell roses. But who have stories, smiles or eyes full of images which might please their host.

It’s after two days of bicycle south of Coyahique that we leave Chile, on the banks of General Carrera lake, or Buenos Aires lake on the Argentinian side. It’s the same lake, the same water mass, but the two countries don’t seem to agree on a common name. Moreover, it’s the second biggest lake in South America after the Titicaca (which doesn’t have two distinct names between it’s Bolivian and Peruvian parts). But we’re not to one political paradox more or less between those two countries who call themselves hermanos (brothers) and who love so much hating each other.