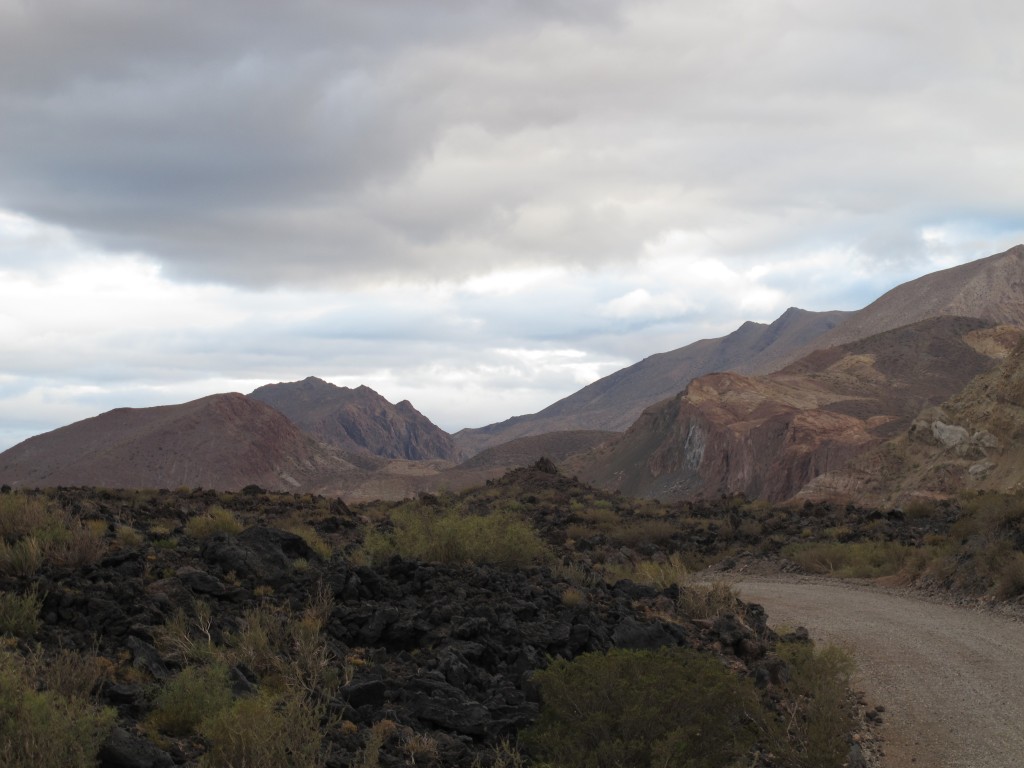 It’s a second entrance in Argentina for me but the first one for Guillermo. Let’s remember that it’s just a few days before that we had the accident. The downhill on the Argentinian side wasn’t that easy because of the loose gravel and the face wind. But like Guillermo was saying: at least on the gravel, there no choice to go slower and if you loose control, falling hurts less than when you go at 40 km/h!

This segment on the Argentinian side won’t be very long; just 500 to 600 kilometers. If on the Chilean side we were South of its capital, on a quite populated area, it’s quite different here. Buenos Aires is very far from here. Quite often, it takes the day to arrive to the next town.

Even if it’s the beginning of summer holidays, there not that much traffic on the road 40. Argentinians aren’t much in a rush here and leave us a lot of space on the road. They happily wave at us or show their thumbs up to cheer us up. We can distinguish them from the Chilean on holiday that pass by here, not just by their different licence plates but by feeling them passing so fast and close to us, even if the quite empty road is reasonably wide enough for everyone. 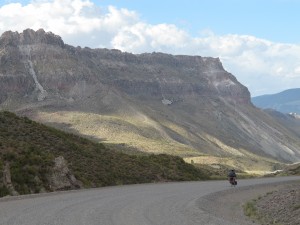 The landscape is also different than in Chile. The almost-absence of trees open up the sight and even if it’s still montainous, we see far ahead. Up a hill appears the following of the road, all in large curves and little hills and far away we see the exit of this giant painting which we are cycling on for half an hour, an hour sometimes. We enjoy the ocher, red and brown paintbrush strikes from the mountains worked by the wind. On the last uphill of this painting, we wander how the next one will reveal itself. Sometime a river far away stretches its quiet blue tinted with sediment, surrounded by a bit of green from a dependent vegetation. With a framework of little and round volcanoes, we roam through the brownish darkness of a milenial lava bed. A high and far away white on the cordillera tickle our eyes. 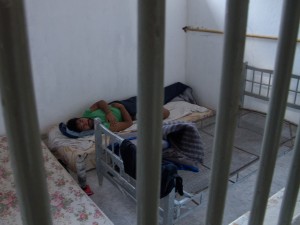 We sleep near a river or simply behind some bushes not too far from the road. If we can arrive to a village at the end of day, we enjoy the sometimes-free municipal campground. After a day where a cold rain was starting, we asked the policeman where the campground was. It was just behind the police station, but seeing our bikes and the rain falling, he offers us to sleep in the garage. Then he changes is mind and invites us to sleep in the police station cell. We thank him cooking for him a meal that will change him of his solitary habits. 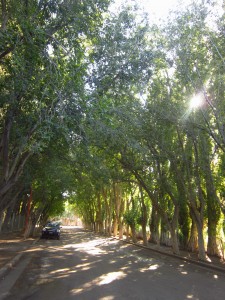 The next day, we head towards Buta Ranquil. From the outside of town, it looks like nothing amazing, but it’s while entering that we discover a green oasis hidden in those arid mountains. The town is hidden in the fresh shade of a thick little forest. The gauchos wearing traditional clothing were wandering around on their horses the Sunday we got there, the dust of the road playing with the few sunrays crossing the foliage. Buta Ranquil was quite an interesting surprise.

Chos Malal was the “big town” of this segment with its 13.000 inhabitants. A two-day rest is necessary, for two missions amongst other things: fix the tent and find money – Argentinian pesos at a good price. A tent pole broke and in vain, I couldn’t find a replacement piece in Chos Malal. But as it’s impossible to go on a long bicycle trip with grey Mac Gyver tape, I built a kind of cast for the pole using a piece of flexible metal from a can of olive oil. It will last the time it will last.

For the Argentinian pesos, it’s needed to understand that it’s hard to understand the monetary strategies that the central government is doing, which keeps artificially high the rate of the currency in chronic devaluation, creating a high inflation. To avoid capital escape, finding as an Argentinian more stable foreign currencies is a painful administrative art. A paralel money market was developed so if a tourist arrives with United Statians dollars, it would be able to exchange them for a better rate than the official one. The Argentinian having the luxury of having savings buy those dollars as saving bonds, knowing that a year later or even less, they will be able to exchange them for more pesos than they bought it. The exercise of finding who would like to buy dollars and negotiating is of course more demanding than going to the ATM. 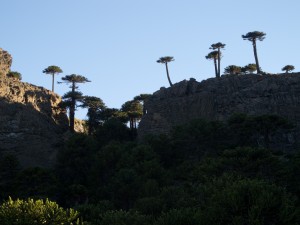 With a postmodern-looking tent and something to make groceries, we go back on the road with about a hundred kilometers without access to water, until arriving to a river with a brownish trickle. We forget spaghettis or rice cooking and we eat crackers to arrive to Las Lajas, where we leave road 40 to go back up the Cordillera towards Chile, up Pino Hachado or “cut by axe pine” if we translate. We understand the name of the pass when we get closer. The araucarias are standing as the guardians of the pass with their look of… cut pines.