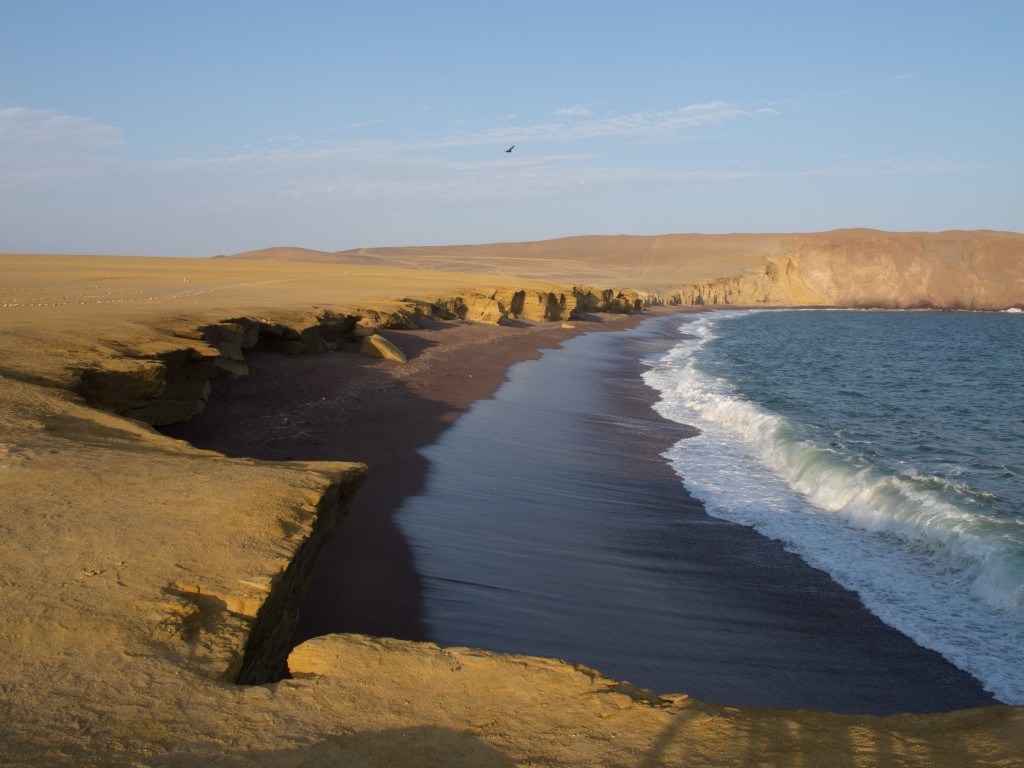 My two feet in the chilly Pacific, I’m trying not to think about the fact that I’ll have 3.000 meters to climb back up to go back in the Andes. Passing, in a day and a half, from 5.000 meters elevation to zero was a pleasure that I’ll probably be able to do only once. It’s in Paracas that I get comfortable in an almost empty youth hostel. A few souls are wondering around in this touristic town south of Pisco, which maybe in some other time of the year is overcrowded. The air is dry and in the afternoon, a wind from the South named “paraca” sometimes brings gusts full of sand. This sand comes from Paracas National Reserve (I try not to repeat myself, but it’s like that), where I’ll go wandering around in the end of a rest day to enjoy the sunset in a desert-by-the-sea setting. It changes from the mountain let’s say…

I see on the map I’ve been given entering the Reserve that it is possible to go through small roads to get to Ica, my next destination, instead of going on the Panamerican. The park ranger gives me as much information as possible to orientate myself, while warning me that it is easy to get lost, the fisherman around making their own way in the desert.

I leave the next day very early to avoid the afternoon paraca, but indeed, I get lost two times, needing to go back to the former intersection, loosing about two hours. I get back on track easily though, with the ocean on my side. I arrive to a small fishing post around 2PM and the wind has already started. I could camp here and go on the next day, but the park ranger from there tells me about the road ahead that leaves the coast to meet Ica, cutting through the desert and often got covered with sand dunes with the wind. I will probably have to push my bicycle over them, while keeping in sight the little kilometer posts to stay on a straight line.

Good challenge, but I don’t need that today, neither tomorrow or even after tomorrow if there are a lot of sand dunes to cross. It will be faster to get push by the wind to go back to Paracas and take the Panamerican the next day to Ica. The day has been wonderful still, alone in this coastal desert.

In Ica, a host was waiting for me, where there were already two Chilean CouchSurfers. Our host brought us to some bodegas for a tasting of the pisco production coming from the grape fields around and to visit the artisanal distilleries producing the translucent alcohol. It is sometimes mixed with grape juice that they’ll call vino, even if there is no real fermentation. I needed that more than sand dunes crossing I think…

The coast is different, people are more mixed than in the mountain. I don’t see anymore those sympathetic woman in traditional clothing kniting while walking. Less people are staring at me, more used at people coming from everywhere. After spending so much time in altitude, I’m full of energy to push my bicycle on the smooth, large-shouldered pavement of the Panamerican, swallowing the kilometers, seeing far away in front of me.

Tourism in development in Palpa

I do a hundred kilometers before lunch the day leaving Ica. Sitting on the sidewalk in front of a mini-market, a woman starts to talk to me asking the usual questions. She is well dressed, like if she was coming out of a five-star hotel with her professional pants and vest. She had a little maple leaf pin on her vest and she tells me that she got it from the Canadian ambassador. She is tourism teacher at the technical college up the street. A little bit after telling her that I studied in tourism and that I am Québécois, she invites me to the college to give a conference to her students at the beginning of the evening.

Before that, she sets me an afternoon program with one of her student to make me visit the surrounding attractions. We find a lot of archeological sites and geoglyphs in Palpa which, unlike the ones in Nasca which are on a vast plain, are smaller and set up on mountain slopes. It’s then not necessary to pay yourself a plane flight to enjoy them. You just need to climb a neighbor hill or a set-up mirador. It is possible to finish the day bathing in a river (under a historic suspended bridge where a pipeline was unfortunately set up) or at an hacienda close by.

Unlike Nasca lines, a couple dozen of kilometers away, the place didn’t get as much international attention, first by the German Maria Reiche, who consacred her life to the study of the mysterious lines of Nasca, then the UNESCO, who declared the site as world heritage. It’s hard to get signing set up to be able to get to the Palpa sites, and just a few kilometers further, while I leave Palpa and pass a hill bringing me to the Nasca plain, I arrive in mass-tourism organized territory with adequate signs and more or less pertinent souvenirs sellers, under the plane’s motors noise flying over the plain.

Nasca town didn’t caught my attention, looking for not paying more than necessary for lunch, to then recharge on water and food reserve. From there, it’s back in the mountains, and a long uphill is awaiting me.