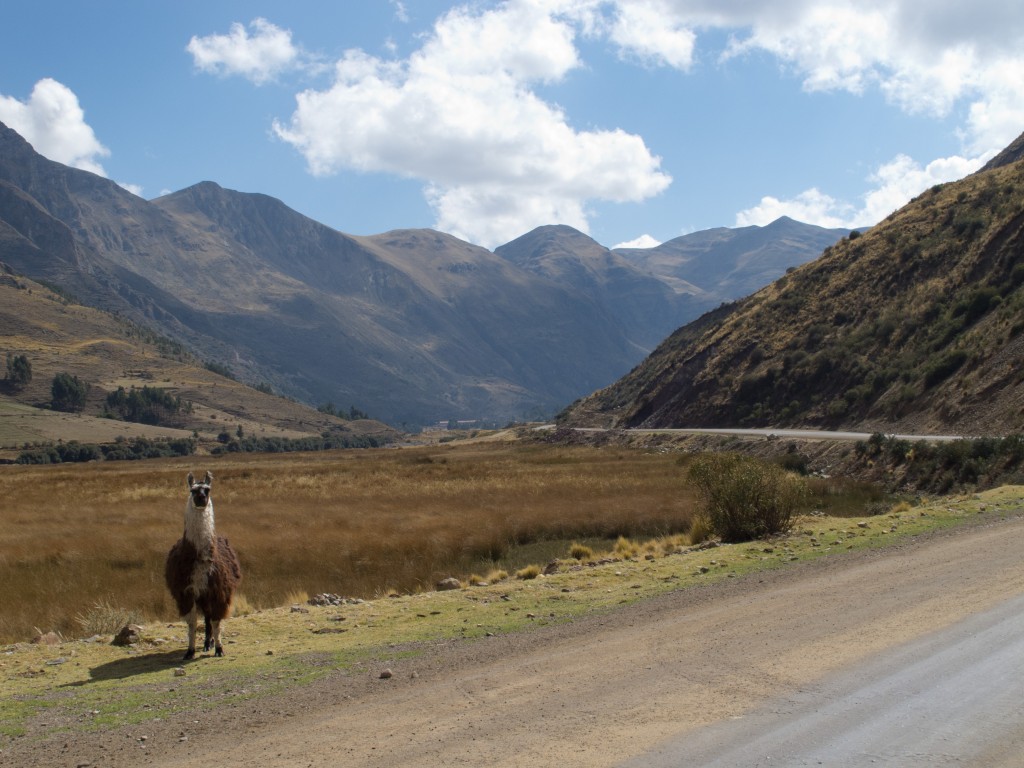 I was leaving Huaraz alone, ready to cross Huascaran National Park, through its high snowy peaks. Not even 4 kilometers out of the city, I see two cyclists stopped on the side of the road, thumbs up. There are a French couple, Benjamin and Faustine, trying to get into a truck with their bicycles to get back where they had to stop 50 kilometers further, where Benjamin’s derailleur declared forfeit. Even before knowing our names, we were aware of our respective intestinal issues, even those of the Québécoise on bicycle that I never met, but exchanged a few emails; they biked with her for three weeks.

One hour after leaving them, a head gets out of a truck yelling that we will meet on the pass. I couldn’t catch them up on that day, but the next morning, after a few kiloometers, I see a tent not too far from the road. We will share the road for a little bit more than a week.

It’s quite funny to bike with French people. First, on my side, it was quite nice to be able to share stories, impressions, joy or worries in my language. Then, for them, as good French, they could laugh about my accent and, of course, talk about good food (and cook it!). Even if as a Québécois we share a lot with French people, I could realize while traveling with them that I share things with South America that they don’t. For example (verrry serious!): yellow mustard, also known as baseball mustard, and also the fact of getting just a fork coming with your plate, without a knife, and be okay with that and do with it. Talk me about that, the happiness of being a hybrid nation on the NorthEastern corner of the Americas…

The body giving out

We split in Huancayo, after, between many events, crossing rain (and sometimes hail) every day, sharing a meal cooked on a hospedaje terrace, being thrown rocks at by kids, camped on a soccer field at a mine camp (after the never-ending game) and put our camping mattress in a small restaurant at 4.000 meters elevation, where it was as cold as outside, but a least without wind.

The couple will go on toward Ayacucho, the direct road to Cusco, which goes through five passes over 4.000 meters, cut by valleys at 2.000. Cyclists coming from the South told us about road construction that may made us put the bikes on a truck. Finally, going North to South, it’s less necessary, as the roadworks are downhill and they can be crossed on the time period the road is opened for traffic.

On my side, pink letters on my map were grabbing my attention since a while: “Highest pass in the world”. Well, first, let’s calm down and we will talk instead of the continent’s highest pass accessible by a road (the Himalaya has way higher roads). And then we have to agree on the definition of a road. While a pass in Argentina is claimed as the “highest pass accessible by a numbered road” at 4.895 meters, the Abra Huayraccasa in Peru, at 5.059 meters, should be the highest pass accessible by a maintained drivable road”, meaning where a car can get without too much trouble. Some research on Internet let me know that the Argentinian pass would be actually higher that its sign says, and that it would be the contrary for the Peruvian one, making both of them more or less equal. Anyway, the sure thing is that it’s high, and that I won’t go play over 5.000 meters quite often in my life. I was hesitating to go, the pass being out of the “traditional road”, but those roadworks stories and those dusty passes convinced me to make a little (lot) more kilometers, going to that pass, but also being more often on paved roads afterward. Moreover, as I say in my latest video, going back up to Cusco afterward, I’ll go four more time over the Great Continental Divide this way.

However, the day after leaving Huancayo (3.260 meters), on my way towards Huancavelica (3.680 meters), sitting down the 60-kilometer road going to this famous pass, my stomach don’t want to go with me on the road, I fell my batteries discharged, I go up at turtle speed. I arrive in Huancavelica exhausted.

I thought it was parasites’ comeback, telling me that this time it’s better to see a doctor before taking an other kind of pills. After going from an hospital to a clinic to a medical laboratory, in misadventures and disorganization that I’ll skip the details, I learn, after three days, that I’m doing anemia, that my red corpuscle are missing ion. I would eat my bicycle, but I need it, so they make me get some ion supplement and I go get some vitamins to make it absorb better. When my appetite comes back, I eat 5 meals a day, pick up red meat as much as I can, also with the idea of trying to gain back some weight.

With all that, I’ll spend a week in Huancavelica. At least, it’s a nice place to fall sick. This regional capital is not a big city, and the central square and surrounding streets are fully pedestrian, filled with small restaurant and fresh juice shops. The traffic absence in the center (and the eternal horns and alarms) brings down a lot the noise pollution. After a week, I found back my moral and motivation, I’m not out of breath anymore when I go up to my room on the third floor and my legs have pins and needles: it’s time to go on.

From sky to sea

Already at 3.700 meters, you have to get use to move without loosing too much your breath, and hopefully this week helped me to acclimate a little bit. Going up slowly, but longly, through lamas and alpacas, a headache is starting to build up. It’s the same headache that I had in Huascaran National Park, going over a 4.700 plus pass. I don’t have any choices than do with it. It will go when I’ll go down.

I’ll spend the day going up, stopping often to rest and hydrate. Not going too fast. Keep my stamina. It’s not the hardest technical pass I’ve did, but the altitude doesn’t help.

Seeing far away the sign naming the pass, shudders fill my body. Here I am. I can’t control my tears. Tears of about everything. Tears of pain, tears of tiredness, tears of proudness, tears of contemplation of this silent scenery where I brought myself, over 5.000 meters, surrounded by snowy peaks colored by the sunset. “Emotional landscape” as would say Björk. I got to the highest point of this journey. It’s out of the question to move from here until the next morning.

A small depression let me set up my tent away from the road, which is anyway only used by mining vans taking out the ore from the mine further or coming back empty. I put all my clothes and get ready to spend a cold night. The next morning, I’ll break the ice in my water bottles a will cook breakfast under 12 pair of astonished eyes. Men working on the road saw me and observed every move I was doing, stupefied, observing my camping equipment. First, they were wandering how I woke up alive, and then was examining my sleeping bag, my tent, my cooker with a lot of curiosity, chewing their coca leaves between two questions and commenting between them in quechua.

I won’t need coca today, my headache gone during the night and ready to go down. I get quickly to a plateau where deep blue lakes gathered, getting to Santa Ines. From there, a road that looked as a dirt one on my map is actually paved and brings directly to Pisco… by the sea.

I wasn’t thinking going all the way down there. I was thinking going to Rumichaca, in a valley, and go up a 4.000 meter pass on a road that would bring me down directly to Ica. But seeing this road, and seeing on my map that I wouldn’t go up as much to the last pass before going down to the sea, my bicycle didn’t even asked my opinion and went this way. Whatever the extra kilometers, I’m going all the way down!

Go back to zero. Start again. At the end of the day, I went down about 4.200 meters and did 168 kilometers. There will be only 60 kilometers left the next day, going through vineyards in this wide open valley, to get to the coast. The Pacific. This salty water that my imagination sniffs out the forgotten smell 70 kilometers before getting there. I will go back up, needless to say, the Sierra will call me back, but like my episode in the Amazonian basin, it will be good to change for a few hundred kilometers, this time close to the ocean, in the desert, through sand dunes.