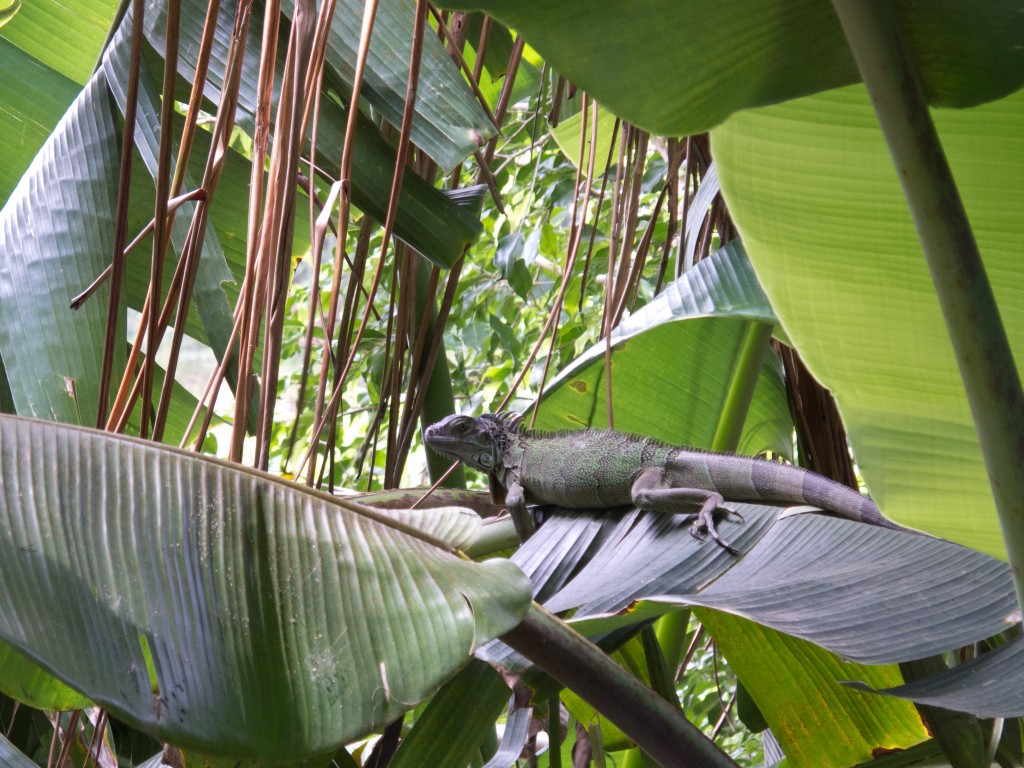 I did my best to make some detours in Costa Rica but only did about 650 kilometers in this small country. Every day, I found myself in different landscapes and discovered proud and generous people, who’ll keep their place in my memory.

I’ve been told though, by different travelers : Costa Rica is expensive, it’s not what it was 20 years ago, it’s merchandised, “gringoification” made it’s way, it doesn’t have the Central American charm that Nicaragua can have, etc.

Yes McDonald’s and co. are floating around, people are walking on nice clothing with big sunglasses, everything is more developed, cars and buses are recent and clean and aren’t throwing a big cloud of black fumes. However, the Central American charm, I found it in the heart of the people; I had a big dose of sympathy during the two weeks I’ve been there.

Entering by this little boat through Los Chiles made me avoid the Pacific coast, described by the Ticos themselves (the Costa Ricans) “americanized”. This might have helped me to have a different vision of Costa Rica. Here I am cycling on a well paved but narrow road, through fields dedicated to an export production. My nose travels in those delicious smells of oranges and sugar cane… and pesticide.

I stop at the end of the day in a little restaurant and ask if I can stay on their land for the night. They accept and here I am during the evening in the restaurant, chatting from time to time with the people passing by. Amongst them, Pablo and Walter, who live in Pital, some 85 kilometers from there. They invite me to stay there tomorrow. I wasn’t thinking stopping there… but why not? 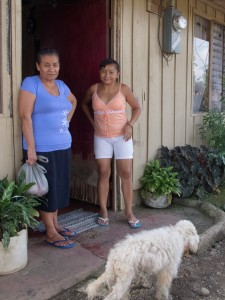 The next morning, I stop in a little grocery not too busy to buy something for breakfast. The cashier lady really wanted to cook a hot breakfast for me, without asking anything in return. At lunch time, I stop at a fruit stand to get hydrated with a whole watermelon. The woman invited me at her house, offering me a large plate of rice, beans, salad and plantain, with a huge glass of iced sugar cane water. They even showed me the iguanas hanging around the back of the house, from a high balcony overlooking a river. Finally, in the evening, I arrive in Pital, spending a very comfortable night with Walter’s family. 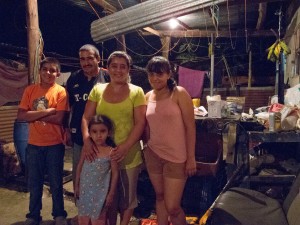 The sauna in which I was cycling in the last few days cooled down when drops started to fall down at the end of the next afternoon. I arrived on a main road linking the capital to the Caribbean port, a cyclist already gave me a banana while cheering me up, and I put myself to the rhythm of those trucks bringing all those fruits out of the country, pushed by a good wind and help by a very smooth downgrade. I did 130 kilometers that day, arriving at Siquirres, at the intersection of the road that will bring me back up in the mountains. I was able to do that even though I broke two spokes on the way. I thought the back wheel saga was over in Nicaragua, but the spokes that were given were a bit shorter than the ones before, the one I had wasn’t existing there. They were breaking one by one, I was changing them one by one… 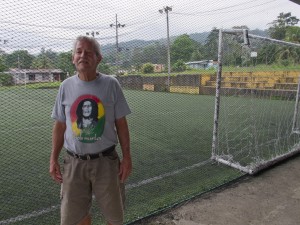 I’ve been told about the synthetic soccer field when I arrived in Siquirres when I asked where I can sleep quietly. I spent the evening with Marco, a guy living in the compound beside, talking about his Central American travels in the hippy years, cut by earthquakes, civil wars, revolutions and counter-revolutions. The last soccer game ended and falling asleep on my camping mattress under the metal roof as easy, two dogs guarding my bicycle.

Cartago and the Central Valley… in French

I woke up in the fog and was ready to go up to 1.500 meters in altitude over 90 kilometers, dotted by downhills that will make me climb back what I just did before. Sunday’s competitive cyclist were tumbling down the hill, cheering me up while zipping by me. They were going all the way to the coast and were coming back by cars. One of them stop by me in the afternoon, while I was still climbing, and a guy gave me a bottle of hydration drink and fruits.

I meet Rafael in Cartago, a CouchSurfer host. The city is the country’s ancient capital, but there is not much left of historical buildings, earthquakes putting things down and suburban sprawling from nearby San José finishing the job. I thought spending two or three days with Rafael, but I finally spent a whole week there!

Rafael is French-second-language teacher. Costa Rica is the only Latin American country having mandatory French classes in schools. While working, he is still studying at a university in Heredia, on the other side of the capital. He first brought me to the primary school, where he integrated my project into his teaching. According to different themes he was working on with the group depending of the level (nature, clothing, sports), I was showing a video of the adventures, they where taking note of the relevant vocabulary, and after that activity, I was answering countless questions from the children. A few days later, I went to Heredia to Rafael’s classes. I was impressed to see those Ticos speaking in a very good French, during the whole class, while turning back to Spanish would be so tempting. One of the class was about interculturality, and they were studying an article about multiethnic classes in Montreal. The teacher was quite happy to have a Québécois and she integrated me to the discussion.

I was quite happy to be integrated to Costa Rican university world, festive scene included, in Heredia as well as in San José. In 1948, the president eliminated the army and decided to invest in education: you can feel it. I was also able to put more solid spokes on my wheel in Cartago. Rafael’s family didn’t want to let me go, we got along well quickly and they invited me to the simultaneous anniversary of two of their sons. I then went back on the road.

It wasn’t over for me to see generosity all around! Leaving Cartago, I started climbing Cerro de la Muerte (Death Mountain), which today do not afraid much anymore, a well graded road lacing around the mountain going up to 3.500 meters in elevation. While going up, rain started to annoy me. I stop and lay my bicycle on a fenced door to put my jacket and my panniers covers. Curious, I go see what’s on the other side of the fence. A shelter there could be a perfect place to camp for the night and wait that the rain clear up to enjoy the climb. Nobody seems to live in the house there. There’s enough place to enter my bicycle through an opening beside the door, so I go get it to explore a little bit more the place to see if somebody’s there. 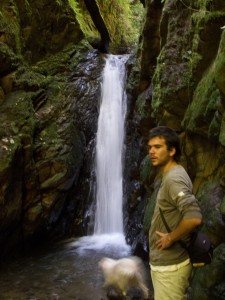 I meet Hugo, a guy my age, who occupies the place that belongs to his friend. They rent rooms, but the place is in some kind of renovation. He invites me for a fraction of the price I should pay, prepares a fire to heat the place up (at 2.700 meters, it’s not that hot in the Tropics), and we cook together a hearty meal, including hot cane sugar drink, that you drink like a hot chocolate. The next morning, the sun was back, and I go with him through trails around the property, in dense and luxurious rain forest, were colorful birds are flying around.

There were only 15 kilometers left before touching the top. It took me only an hour to go down for 45 kilometers, stopping on the descent to take clothes layers off or wait that slower trucks go ahead as I was faster than them. Pura vida.

I slept behind a small grocery that night, and the owner brought me a coffee and pastries the next morning. Back in the heat, through coffee plantations, I was climbing a secondary road to San Vito, way more abrupt than the nice Cerro de la Muerte main road. While I was looking for a place to spend the night, a training cyclist pass me and take my speed to chat with me. Rodney invites me to his house, sharing his reality and knowing his little family. Due Panama the next morning, through quiet Rio Serreno, accessible only via a dirt road, discouraging commercial trucks. The Costa Rican immigration office was well hidden to get the exit stamp in the passport while on the Panamanian side, the militaries remind me their existance. You learn quite fast to forget them.

To cap it all, a generosity bomb exploded me in the face in Costa Rica. The only unfriendly person I met was in Turrialba. A spoke just popped up from my wheel, beside a bus stop. I sit on the bench to fix the thing. A kind of old brat told me, finding that I was taking too much space with my cyclist ass, while there were still more than a meter of space available: “This is a bus stop sir, not a workshop.” “Indeed, I’m stopped. I have a problem with my bike, I can’t go further.” “But this is YOUR problem, we don’t care about YOUR problems. You are on THE bus stop’s bench.” Surprised (and the people around too), I could feel some brakes in her Spanish and asked where she was from. The discussion turned to English. She was United Statian or British, I don’t really know, I started ignoring her, relieved: I never met a Centro American indifferent like that yet.