I just did 700 kilometers in Nicaragua but I stayed there five weeks. I took vacation, if we can say it like that, I did some more volunteering and I fooled around instead of taking the straight line to Costa Rica.

Let’s first remember that I entered Nicaragua with this freewheel problem, which was stuck on the hub. The mountain road through Estelí was way fresher than the lowland road through León, but the downhills were tiring, having to follow the pedals’ rhythm that couldn’t stop.

Change in the look of the people, change in the attitude, change in the accent. Four times on my first day I’ve been asked: “You just arrived from Honduras? Nobody robbed you? Nobody attacked you?” Seems like a lot of horror stories about the neighbor is going around. I say no, everything went well, a woman gave me water while I was fixing a broken spoke, a pizza delivery man on motorcycle guided me through Choluteca without asking anything in return, that maybe some people were having interested look toward my panniers but nobody jumped on me trying to tear them off. Anyway, I am getting use to those stories. If it’s not the next country that is dangerous, it’s the next town. Always more dangerous elsewhere. Even more when you’ve never been.

Such a surprise to see Talen in front of a huge watermelon while I was entering an hostel in Estelí. He is the Estonian I traveled with a few days around the isthmus of Tehuantepec in Mexico. While I was stopping to volunteer in Guatemala and El Salvador, he was going around the Yucatan, Belize, northern Guatemala and all across Honduras. The comfort of the place made him sick after crossing Honduras. It also happened to me a few times to fall sick when I arrive in a place which allows it, meaning with a clean and near toilet, a comfy bed, running water and hot shower. Like if the body knew that otherwise it’s not a good moment for it.

Our itineraries weren’t on a common road for long, so I left after a day of rest, going down toward Managua and Nicaragua lakes, back in the heat. I have a “meeting” in San Juan del Sur. I stopped in Belén, not able to go further before sunset (and just not able to go further anyhow). This little town only had the church and the sandinista party office that was open on this late Saturday. I pop my head through the door to ask where I could spend the night quietly. They first offer me the sidewalk on the central park. Politely, I explain that I am traveling by bicycle, that I don’t really mind sleeping on a sidewalk but I am worried about the comfort of my bicycle, who can attract some curious eyes through the night. They show me the land behind the office, where mangoes where falling from the sky. Happy about this option, I set up while saying hola to the neighbors. One of them came back an hour later saying that it doesn’t make any sense to sleep outside and that I should come over to their place. Here I am in front of a plate of scrambled eggs and gallo pinto (rice and red beans), typical meal for breakfast as for dinner, happily watching with the family the baseball world cup.

While chatting with them, I talk about the mechanical problem that eat my energy. One of the sons informs me that there is a reseller of Shimano parts in Rivas market, ten kilometers away. Nothing happens for nothing. The next day, he brings me in the noisy streets of the market to show me the shop hidden behind imposing women selling tortillas. The parts are there, I’ll have to come back only with my wheel from San Juan del Sur. 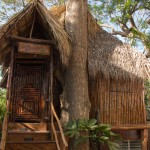 I immediately go back on the road, motivated to encounter my cousin in this little Pacific-side town. I’ll stay 8 days where he rents a place, in a little cabaña still in construction that the owner of the place gave me. I didn’t really know this cousin, who lives outside Québec since the mid-90’s. I met him briefly in the Yukon, in Dawson City, while he was working. I mainly stayed with his wife and kids instead. Far North winter being rough, he works up there eight months a year and bring the whole family down for four months in Nicaragua. I rested a lot and meeting them again was good fun.

Even though I was only 20 kilometers or so from Costa Rica, I went back to Rivas and took a ferry from San Jorge to Ometepe Island. Build from two volcanoes, this islands sit on Nicaragua Lake. A tranquility smell was invading me as soon as I arrive on the island. Decibels are lower, everything is slower, the road is asking me from below to bike not too fast. The fuming Concepción volcano was looking at me going around its base. I spent the end of the afternoon in Charco Verde, looking at fishermen throwing their net, locals cleaning their clothes in the lake and herds of animals coming to have a drink.

I took the whole day to do the 30 kilometers to Mérida the next day, on the shore of the other volcano. I did a little hike, saw my first monkeys and stop in Ojo de Agua taking a dip in the fresh spring water.

I was seeing pretty well the fact of staying in Mérida for two weeks, rewarded every night by an incredible sunset in an environment mixing tourists and local population. The volunteer work at the Hacienda Mérida is usually to give English classes to kids in the morning and teenagers in the afternoon. I arrived at the beginning of Semana Santa and Easter’s celebrations though, which is quite a serious thing in Latin America. Hard to motivate the children to take English classes while it the last nice weeks of the summer (dry season), the winter (wet season) expected to start in the next weeks.

I wasn’t bored anyhow, doing more administrative work for the bilingual school project setting up progressively on the hotel site. I created a contacts’ database and set up the admission forms to subscribe the organization on the Omprakash website, which permits to recruit more volunteers and do financing campaigns transiting funds through the website for the construction of the next buildings. One is almost fully built and has the particularity of being partly made of trash. I made a video for them explaining the concept:

And I had some visitors! Mélanie, a Québécoise I first met in Barcelona on a student exchange, who is now working for the Alliance Française in Managua, came to the island with a friend. Alejandro, the Mexican with whom I spent New Eve in Puebla, came in Nicaragua for his Easter vacation and met me at the Hacienda. We took a ferry to Granada, the oldest city on mainland Americas, founded in 1524.

Going to Granada, I was going back north, getting even further from Costa Rica. This made me going around the Eastern side of the lake instead, first on a small dirt road interrupted by rivers crossing with small platforms or simply by walking through. Then I was on a quiet paved road through Juigalpa toward San Carlos. It’s been a while since I’ve been in a area where towns are so apart and separated by lonely areas. The sun was setting and nothing human around, I set up my tent under a bridge in a dry river bed. Nobody to disturb me, but I had to hide in my tent sooner than expected as bats were starting to dance around under the screams of surrounding monkeys. I was snoring at 7:30 and had wonderful dreams.

Back on the road at 5:45, it was still morning when I arrived in San Carlos. It’s a dead-end for cars, but I could wrap up my bicycle on a boat that goes up the Río Frío (which has nothing cold) in a surrounding worth any aquatic safari. The trip was about 10 kilometers to Los Chiles, the first town in Costa Rica. The economics flowing around this aquatic border transiting will die next year, a bridge being built on European International Cooperation help, then following an improved road along Río Frío to Los Chiles. It will help for alimentary transportation are saying the signs along the road. Let’s see if it’s for helping the shaky Nicaraguan economy or the fruits multinationals installed in Costa Rica.