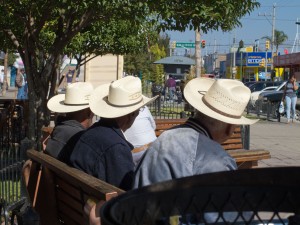 The first bike-paddle strokes in Mexico were the first ones in Latin America, which will be of the rest of the trip, but still, it was for sure North America. We heard a lot of stories about Mexico (mainly from United Statians!) and discovering it by ourselves was a pleasure, where I never felt uncomfortable and even less in danger. Even though I made less kilometers than in USA or Canada, I spent more time in Mexico, stopping more often, longer time. 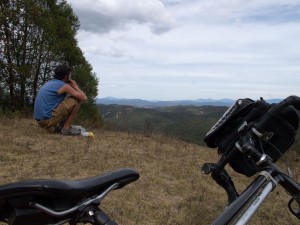 Eating was a real pleasure in Mexico, available and affordable. You can find in each town tiendas and abarrotes which sell a bit of everything. A fruits and vegetables market is often set up on the central square or close to it. The flour tortilla, more common in the North, is switched by the corn tortilla, that I had to learn to like. The lunches quality got way better in freshness compared to United States, for all the fruits and vegetables that were easy to find. Mango season was starting when I was in Southern Mexico and for the price of one in Canada, I could buy 12 there!

Each region have it’s own local speciality, which generally include a tortilla or a base of corn flour, beans, meat and sometime cheese. The streets stands are there to make you discover all that for cheap, but for an always-hungry-cyclist, it’s more a nice snack than a whole meal.

Mexican cost of living made me upgrade a little bit my sleeping comfort. Indeed, it was quite tempting from time to time to pay for an hotel, even more at the beginning when we were two to share the cost, rarely without going over $15 for a room. Pension-style hotels, with shared bathroom, was even more affordable, paying 80 to 100 pesos ($6 to $8). Asking si se renta cuartos (if there are rooms to rent) to people around instead of if there are hotels might bring you to cheaper places (or even free). In touristic towns, it is possible to find youth hostel with a kitchen, where you can meet other travelers. It happened to me in Oaxaca. However, I prefer to meet the local, and almost half of my nights were spent at Mexican places, mainly through people I met on CouchSurfing but sometimes also by luck the same day, finding a spot for the night. 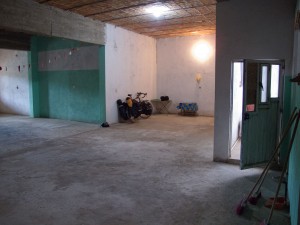 Wild camping wasn’t forgotten, even though it was less frequent. Central Mexico was quite urbanized, so more difficult to camp, but I was able to do it a few times in Southern Mexico. Pablo and I did it often in the North, while we were on small roads and where people was saying it was safe. It often happened that people wouldn’t recommend to camp between two villages, maybe more by fear or misunderstanding of camping that for real danger. However, those people generally took it as an honor to find a place to host us. So that way you can end up in a manicure boutique, behind the toilets of a public park, at people’s house who might don’t have a lot but are happy to share it, in a public show room or even in a vacant prison! 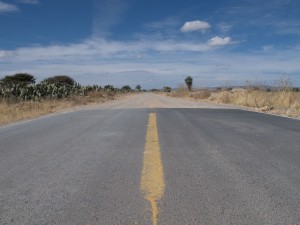 The parts of the Great Divide Mountain Bicycle Road I did in United States have contaminated me, and Pablo quickly got the taste of it in New Mexico. It didn’t take long before we venture in some backcountry roads. The Barranca del Cobre National Park and its surroundings, in Chihuahua state, is a marvelous playground for mountain bicycle, on very steep roads going from out-of-the-world village to an other. It’s possible to spend days there, from one canyon to an other, but we chose to do a 75-kilometer section between Cusárare and Norogachi, which took a day and a half to do. Some people will say that the area is dangerous, but you just don’t have to try to find out what is in those trucks passing by, smelling fresh herbs.

On this map, it’s the part between Cusárare and Norogachi that is unpaved.

Entering Durango, we also made a dirt road section, avoiding that way Hidalgo del Parral and the long and straight PanAmerican highway. We went through Los Morillos, a hot spring, and Canutillo, exile town of Francisco Villa after the Mexican Revolution, where an interesting little museum in the church shows the events. There were a few river crossings, but nothing too deep at the time we were there.

The section between Villa Ocampo and Canutillo is paved, the rest being unpaved until the intersection with the road for Santa Maria del Oro.

Finally, to link Zacatecas to San Miguel Allende, it is possible to go through big cities, either Aguascalientes or San Luis Potosí. There is also a way between them, with sections of unpaved road. It is often necessary to have to ask the way to the next village, as there are almost no signalization.

The section between Pedregoso and the intersection of the Ojuelos de Jalisco road is mainly unpaved.

There are many options to avoid the capital and its dense population when you travel through Central Mexico. I chose one than still give the possibilities to visit a few places along the way, like the Sierra Chincua Monarc butterflies sanctuary, in Angangueo’s heights (but going up there is not easy!), and the archeological sites of Tula and Teotichuacán. This itinerary contains a lot of road changes, the map have to be looked at often, and there are a lot of traffic on a few sections. Maybe it would have been quiter more in the north, but I wouldn’t have been through those sites.

If some people are tempted to take the toll highway, which have smooth pavement and large shoulders, it has to be known that it is technically forbidden to cyclists, but that you really have to be unlucky to get caught. They generally don’t care. At the toll station, it’s needed to squeeze at the end of the shoulder to avoid activating the car sensor, and the guard will let you go. However, I don’t see the fun about going on those roads, because you don’t go through any town and it might be hard to get supplies, or very fade and boring to do so in gas stations.

To link those two cities, there is a toll speedway, a main road following it not too far or an itinerary of small mountain roads. Only a two-kilometer segment is unpaved, to link a Pueblan village to an Oaxacan one. Curves along the mountain slopes might make you regret that less-direct road, but putting your head up and enjoying the scenery makes it easier.