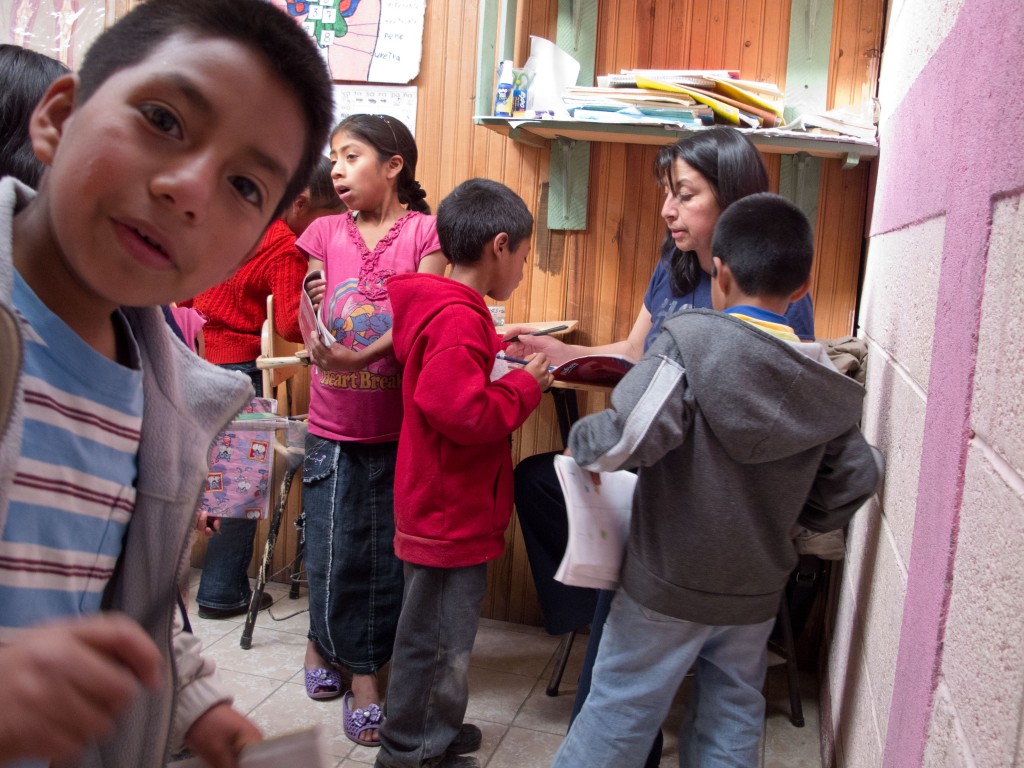 I got in Guatemala with Anita, whom I was cycling with since 4 days in Mexico. Our days together were on the countdown though, as after only two days in Guatemala people were waiting for me in Quetzaltenango for a first period of volunteering. The objective in Central Americas is to take the time to know a little bit more those countries which would have been quickly crossed if I was only cycling. Volunteering is a way to slow down and learn.

The border town was busy, with shops swallowing up the street, the road getting narrower. There were a lot of pedestrian circulation but not much cars. It’s needed to be cautious along the administrative process of getting out and getting in the next country, a thing I’ll do often in the next months, navigating through money changers and other sellers.

Here we are in Guatemala, sharing the road with tuktuks, those red minitaxis with a small noisy motor. Instead of being told “buenos dias” or “buenas tardes”, we are being told “adios”, goodbye: perspective change… To go on with that story, here we say “buen provecho”, bon appétit, at the end of the meal instead of at the beginning of it. I have trouble getting used to being yelled at “gringo” when I am passing by on bicycle, loudly and persistently. Generally, I don’t mind too much from kids, but when adults yell “gringo” to you and that’s the fiftieth time of the day, it’s a little bit more irritating.

If Mexico could have been noisy, you can add here the harmony of the chicken buses, those United Statians and Canadian yellow school buses which probably didn’t respect the environmental norms in the North anymore so they are sent South, being used here as intercity transportation. They are brightly painted, decorated with religious icons and phrases, and/or designs like flames, sharp teeth or anything of “I’m the king of the road” style. You got to hurry to get in, while the copilot is shouting around to get more customers, and men go down while the bus doesn’t even stop completely. Inhaling the black and blue smoke when it is accelerating while I am beside is a fully zen moment.

My first Guatemalan night was at Madrid’s place, a Warmshowers host in Huehuetenango. Well involved in is community, he is participating to a masculine initiative movement against machismo. Micaela, and Californian cyclist, was also hosted there. Anita will stay with her a day longer while I was throwing myself toward Quetzaltenango.

Second biggest city of Guatemala and also known as easier said Xelá, Quetzaltenango where the place I volunteered for two weeks, at El Nahual. It’s a community center offering educative programs to local population as well as Spanish classes to foreigners. I was mainly helping the children showing up in the afternoon with their homeworks from school. I also fixed about ten bicycles and made a presentation video of the community center that they’ll use to attract more volunteers and donators. To see down here!

It’s not always nice and warm under the tropics! As soon as the sun goes down, it’s cold in this city at 2.300 meters elevation. My white and blue shirt that followed me since the beginning of the trip was al torn up now, and I had to go shopping a bit to stay warm. Sincerely, only the clothing that La Cordée gave me is still resisting after those eight months of bicycle. 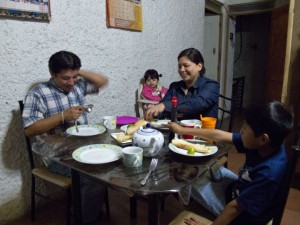 Also, it was quite strange to have my stable little routine for two weeks: the same way to go to the community center, the favorite bakery, seeing the same people in the street and the same dogs laying on the sidewalks. I was hosted by a family with two adorable kids. Time went by too fast and I was already back on the road.

Touristy Guatemala and the less-known one

While Anita was staying in Xelá to take Spanish classes, I had news from Micaela and we met in Panajachel for 6 days of traveling together. She was going North to El Petén and I wanted to go around Guatemala City to avoid a little bit the smog of the PanAm highway.

But smog was also covering Atitlán Lake when I was going toward Panajachel. I couldn’t even see the three famous volcanos on the other side. Fortunately, most of it went away the next day and we could enjoy a marvelous view while leaving Panajachel along the lake on a secondary road. We were quite happy to leave this town where the locals were seeing us like walking dollars through almost aggressive solicitations.

Cycling isn’t very fast in Guatemala, at least on the road we chose. Mountains are everywhere anywhere and roads throw themselves into it without to much detours.

We took a day off in Antigua, former capital of the country and devastated with earthquakes. The churches and other buildings ruins amateur will like it there. Getting lost in the vast public market is also interesting. While we were heading toward a little café in the evening, people tried to steal us, in quite an amateur way, that fortunately failed. We avoid the man playing the drunk guy falling on us and his mate waiting for us across the street by going back to the central square. 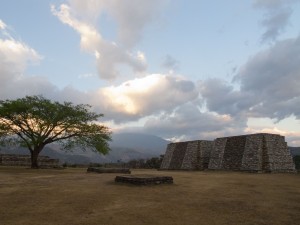 Due North, were things will be quieter. Thanks to the guards that welcomed us, we could camp at Mixco Viejo, an Mayan archeological site, one of the few that were still inhabited at Spanish Conquest. We had the site to ourselves, even though we were not that far from the capital. After there, the road was getting worst, we needed to zigzag between the potholes in the downhills, and what looks like a paved road on the map was actually a dirt windy road. Those steep roads made us sweat, but we discovered quite interesting little towns. 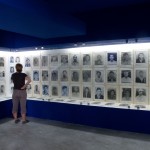 We finally found back the pavement for good in Rabinal, in a region devastated by the civil war, that peaked in the beginning of the eighties. An emotive little museum show the events through portraits of victims of the war.

In Salamá, Micaela and I went on our own. I can’t go further North to go to El Salvador. From there, things were a little bit more direct, sprinting in a large and hot valley, after a sweet 20-kilometer downhill. This valley was going toward the Caribbean port of the country, but I turned off to go to Anguiatu border post, slightly smelling a part of this country I won’t be able to visit, darker skin colored and reggae music getting out of the cars.