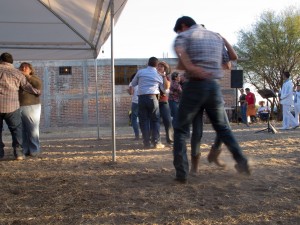 At the end of my last article, I was saying that I will celebrate Christmas and New Eve at Pablo’s friends-of-family place. Making plans while on a bicycle, it’s like buying a pair of shoes in teenager crisis and thinking they will fit for your whole life. Talking about a certain future is something I try to avoid while on two wheels, but I had a flaw.

In Zacatecas, Pablo decided that he will go discover his own ways by himself. They might meet mine one day somewhere else. Even though I would have eventually been able to go spend Christmas in Tasquillo, I was already going toward new horizons that made me discover many Central Mexico cities and their people.

I met Cristy, who made me discover marvelous Zacatecas and her residence city, Guadalupe, that is just beside. It was a good timing, as I was there during the Day of Guadalupe, on December 12th. It has been already a week that we were woke up by firecrackers and pyrotechnics at sunrise. That day was even better (or worst). It’s in Zacatecas that I gave an phone interview to Radio-Canada Saguenay, that I visited the studio during my warm-up in May. It’s in French and can be listened here. Moreover, Cristy asked me if I wanted to give little conferences about my project at the high school were she is working; an unforgettable experience with very energetic youth souls.

The main roads from Zacatecas to San Miguel Allende go through either San Luis Potosi or Aguascalientes. I took small roads in-between. There were no signalization and I had to ask the people for the road to the next village, which only a third were showing on my map. While I was passing by, Jorge and José invited me to eat at their place, frijoles refritos (smashed beans fried in the pan) and corn tortillas.

Miguel, a CouchSurfer, hosted me only a night in Dolores Hidalgo, cradle of Mexican independence, but what a night! When I arrived, he told me: “Let’s go eat something”. I was thinking that we were going for tacos or something like that. Here I am in a family fiesta, celebrating the graduation of a cousin, with food without end, tequila to fall sick and the banda playing great Mexican classics. Later at night, after the mariachis passed by, a disagreement between two members of the family turn out with a punch in the face, to finally finish in a general battle. I step back and watched the show from afar, the dust from the ground raising, giving halos to the bulbs lighting up the inebriated punches and the tears of disillusioned women.

San Miguel de Allende was way calmer. Peace haven for many United Statians for their happy days, it’s by a newly retired woman that I’ve been hosted. I took advantage of the marvelous city views and the comfort offered by Jayne to fall sick. Nothing to bad, like usual I laid down, slept and felt better.

Celaya wasn’t far, and I got a warming welcome from Raúl, who offered me nothing less that his motorhome as an apartment. I met Raúl at Dease Lake’s grocery store, on the Cassiar highway in Northern British Columbia. He was on his way back home on his motorcycle after a trip to Alaska and did in five days what I took five months to do…

From there was starting a week with a few touristic visits, while I was going around the Mexican megalopolis from the North. On my way to Angangueo, I stopped at sunset in Maravatio de Ocampo, looking for a place to spend the night. I’ve been recommended a little pension in the center, but while I was unsuccessfully searching for it, Concepción went out of the store where she was working to give me water and inviting me to her house for the night, offering the little she has. God put me on her way, she told me the next morning.

The heights of Angangueo are known for be the winter shack of our Monarch butterflies, which a whole generation twirl around there each year to spend winter. Climbing up there, the wet pine smell and the streams brought back memories of my Canadian section and I understood why they choose instinctively that spot. Those little brave things fly about 4.500 kilometers to gather by millions on a few trees, giving a breathtaking and peaceful vista to the visitor: something to cheer me up going on flying my own way…

The Estado de México, in which I entered next, gave me my dose of cars, urbanity and suburbanity. Nothing seems to stop for Christmas, the little business owner keeping their doors opened for business. Between two breath of exhaust gas, I visited two archeological sites, acting like obstacle to the sprawling development of Ciudad México

Tula seduced me with its sculptures sitting on the top of a pyramidal temple. I did well to visit very early Teotihuacán, before the horde of buses from the capital bring down the crowd. I was able to climb up Pirámide del Sol, the third biggest pyramid of the world, taking advantage of a solitary and spectacular view of its little sister, Pirámide de la Luna, and the rest of the site.

A CouchSurfer was waiting for me in Puebla, but the distance from Teotihuacán was to big to do it in a day. Tired and a little bit frustrated by a 10-km mountainous detour from road construction, I got easily tempted by a ridiculously low walk-in price in a “Auto-Hotel” at the entrance of Texmelucan.
– It’s 280 pesos for the night, that the weighty man tells me.
– But it’s written 150 pesos there!
– This is for 4 hours.
I look around. The motel rooms are on the second floor. Under it, the garage has a curtain to discreetly hide the car. The room’s windows are tinted, for even more discretion. I understood.
– You’re alone? he tells me, a little bit puzzled.
– Listen mister. Yes, I’m alone, I’m bloody tired and all I want is to rest, not play like a pig in that room.
I didn’t want to bike a meter further. “Okay for 150 pesos” he tells me, closing the curtain behind my bike.

In Puebla, Alejandro gave me the opportunity to share his reality for a week around New Eve. I met an early thirties man, kind-hearted, taking care of his really sick old parents. It’s custom here for the youngest of the siblings to take care of his parents when it’s time. He peacefully accepts his destiny while teaching communication at the university, directing documentaries and finishing his master to be psychotherapist. Right on the first day, I was integrated to the family, inviting me to the 40th wedding anniversary of a cousin (it didn’t finish in a general battle this time). I saw many of those people on New Eve night, where we happily wait midnight before sharing the first meal of the year. 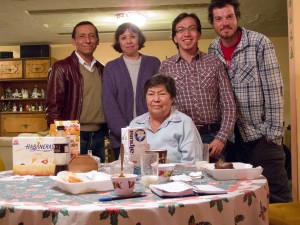 Alejandro made sure I eat everything: some mole, a delicious black mixture that goes with meat; tacos arabes, a Mexican shish taouk; posole, a pork’s head broth with giant corn; mole de pansa, a soup made with bull stomach; cemitas de milanesa, sandwiches with sesam bread made with panned meat; molotes de huitlacoche, a fried pastry stuffed with rotten corn (seems weird but very good!); and delicious tamales de jatotchos y poblanos, a corn flour mass with salsa and meat, covered in a banana leaf for one, and a corn leaf for the other. As for me, I cook my famous crêpes that made everybody happy. I drank ronpope, that look like eggnog at Christmas time. I ate chapulines (fried grasshopper) and all kind of typical desserts like camotes, a kind of fruit paste and empenadas de crema, dripping costard.

I left Puebla with a full stomach, my heart touched by the generosity of those dedicated people, my head full of memories of those Mexican that will have build my journey. It’s now Southern Mexico that’s ahead, more precisely Oaxaca and Chiapas states!