My first miles in Colorado in the deep Snake River valley confirmed the imagery that I was building about that state in the last few weeks: well fenced huge property, beautiful houses surrounded by farm buildings, apparently well-fed horses and cows, a ranch owner passing on his horse telling me I can get water at the well on His property instead of from the river, Hispanics with their cow-boy hat moving sheeps with help from shepherd dogs… all that in a scenery of well sculpted mountains garnished with colorful trees.

All that was quite beautiful, but I was exhausted.

Sincerely, the last days in Wyoming were though. And Colorado seemed to want to cool more and more day after day. I stopped at a cafe about 20 miles from Steamboat Springs, hoping, while getting on Internet, to have a positive answer from a WarmShowers request. I sent the request four days ago and didn’t had access to the web until there. I went toward CouchSurfing to send a few last minute requests when I saw that nothing turned out well. I was about to leave the cafe and go to Steamboat, hoping to have an answer by the time I get there (and if no, see on-the-spot what I can do), when a woman approached me, asking me my story… and asking me if I had a place to sleep. I was welcomed at her ranch.

Here I am at Triple M Ranch, getting ready to spend a warm night by the fireplace in “the barn” or in what that could be called “the kingdom of comfort”. The granddaughter that was living on the ranch was having a bicycle tour around town with her school the next day. Her grandmother had the idea to call the gym teacher to ask her if it could be interesting for the kids if I go to the school before they leave, in order to talk about my project, show my bicycle and pictures, in other words, to give a little improvised conference! 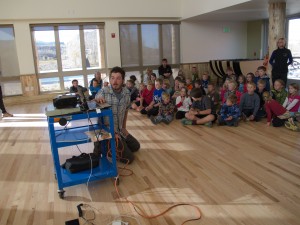 I accepted to do that with pleasure. 70 little pairs of ears were attentively listening to me while their eyes seemed to have enjoyed a few excerpts of my videos. Questions were coming from everywhere when I brought my bicycle in the middle of the room. Thanks to the North Routt Community Charter School for this wonderful experience!

From there, I entered in what I call my “lucky week”: I made marvelous encounters and I was able to sleep inside all the way until Lake City, in southern Colorado. Steamboat and Breckenridge, two ski-resort towns, seemed to be waiting that this in-between and unpleasant season for business owners go away. Snow were being prayed for and I was trying to get out of Colorado before it gets really too cold. 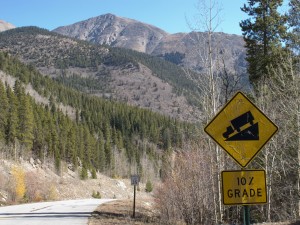 Even if I left the Great Divide Mountain Bicycle Route for the moment, I haven’t made my life that easier neither. Yes I was more often on pavement, but I build myself an itinerary that was going more often over the Great Divide than the GDMBR (6 times on the 9 traveled days out of the 12 days spent in Colorado). The culminating point was Cottonwood Pass, at 12,126 feet (3696 meters), the highest pass taken over by a road in North America. The elevation gain from Buena Vista, 20 miles from there, was about 4,000 feet (1250 meters). I had the happiness to share the road with my hosts who decided the evening before to climb the pass with me!

From there I tumbled down to Gunnison, little college town full of life and young-at-heart initiatives. The rain that started when leaving the town quickly switched to snow, but fortunately didn’t last long. From that point, even though the road was clear, as soon as I was getting over 10,500 feet (3200 meters), the road sides were covered with that white carpet. The last two nights in Colorado were spent under the tent, which really made me realize my entry in New Mexico: I woke up from the first night on the other side of the state border with no ice on my tent!

I ended up in Santa Fe in two days with great wind and a lot of downhills. Such a change! The architecture, the climate, the kind of mountain, the people… I want to call this state the “Pre-Mexico”. My body is asking me to take a lot of rest days before exploring further South. The last hundreds of kilometers before the border with Mexico will have to wait… kilometer that I won’t do alone…

Map of the itinerary in Colorado: