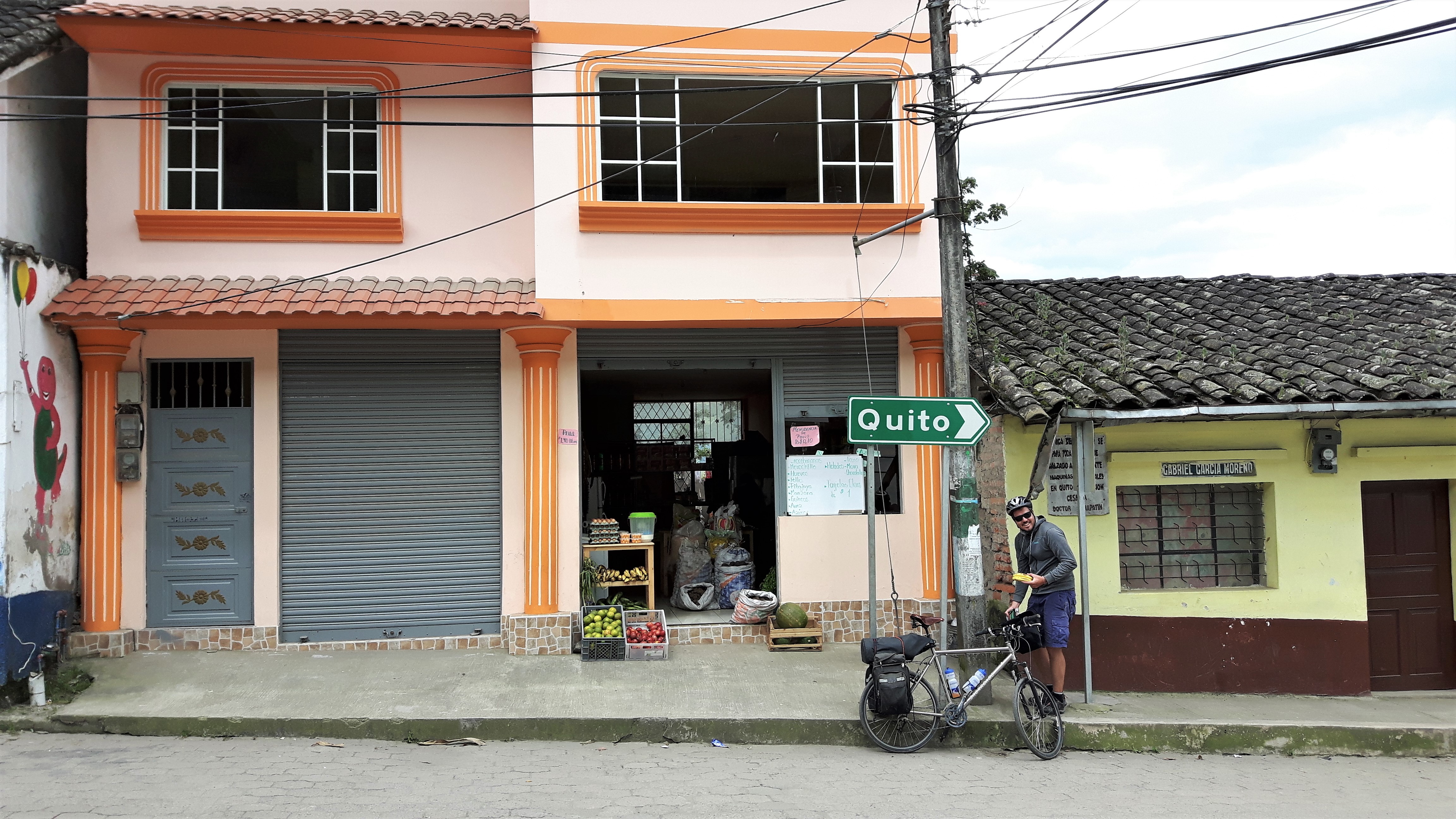 Three years after finishing this North-South adventure through the Americas, it’s quite a stretch that only in 2017 I got back on the saddle. For the job that keep me busy since 2015, I switched my heavy touring bike for light titanium bikes. Even though I also bring United Statian tourists on walking trips as well, cycling is still an important working element on Biking trips or MultiAdventures trips which mix cycling, walking and other activities:

If some people would say that my job is to be on holidays, the reality is that it’s not my trip. My job is to bring people to be on vacation. Everything is planned, we are in a well scenarized frame and secured for our clientele… and we don’t carry our luggage! The doubt was starting to grow in me: “Am I still awaken by the desire of traveling by bicycle on my own?”. After a few years working in the industry, sleeping in comfy hotels and eating in pretty good restaurants, would I still be able to travel in rougher conditions, or am I now condemned to luxury?

That’s what I’ll discover in 2017: two weeks between two tours in Ecuador gave me the opportunity to organize a little cycling outing.

Ecuador: from the Andes to the coast… and return (of the desire to do more) 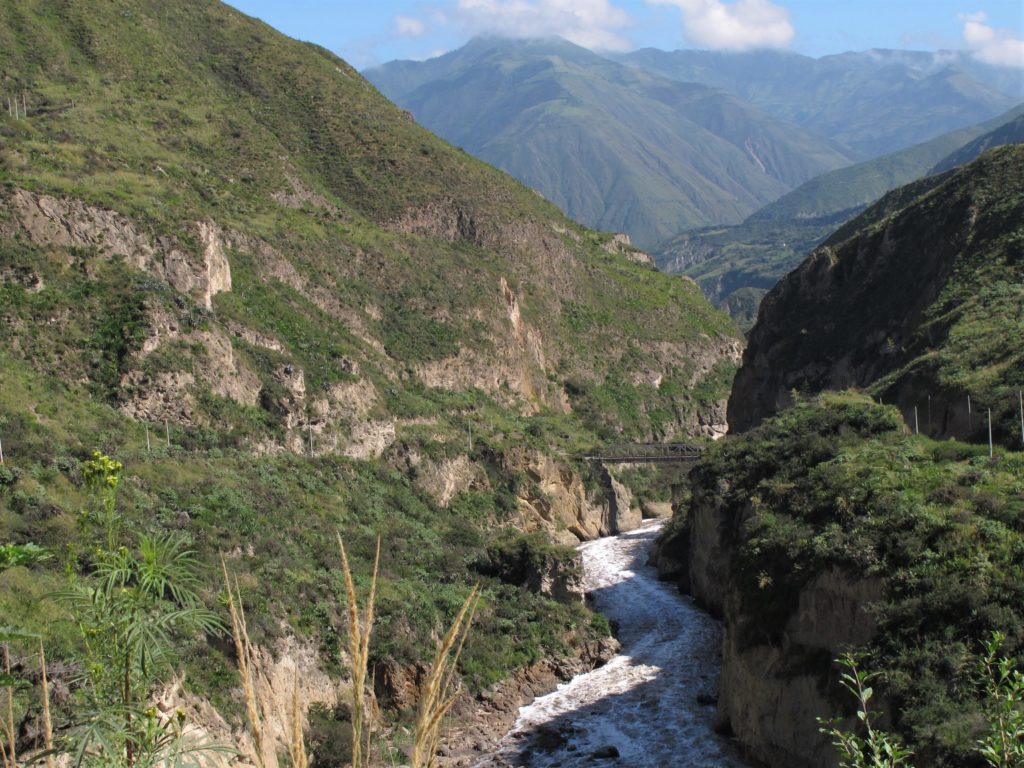 My friend François came to meet me with new tires, that we installed on old bikes sleeping the the small local warehouse of my company. They were being used when the tour was offering a biking activity in the Andes, but they weren’t used since a few years. I also installed my new Brooks saddle that so many bike travelers use for its comfort and durability. That kind of things that you learn once on the road, and take note for the next trip. The thing though, is that you need about a thousand kilometers to “break” the leather saddle in order to make it take your body form. But anyway, with about 850 kilometers to do and over 10 000 meters elevation gain ahead of us, it’s the best time to break it! 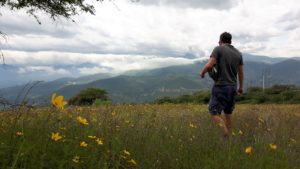 The trip would have lasted 11 days. First of all, leaving the town of Cotacachi where we were based, we had to get out of the Andes. We climb two mountain passes separated by a deep valley. After passing the equatorial line, a last pass was awaiting before going down eternally towards the lowlands of the Pacific coast. What a descent through the clouds stuck in the rain forest! At every curves, my heart was remembering me why I like that kind of travelling: for that kind of f

lying sensation when on two wheels, and for choosing your ways, or letting the ways choosing us.

Almost exactly a year earlier, in April 2016, the Ecuadorian coast has been struck by a powerful earthquake, letting down a population left with crumbled houses and projects. Scars aren’t all patched yet a year later. Many houses and buildings are showing effects of the earthquake, standing has a symbol but condemned. Some towns are surrounded by tent cities, offered by the Chinese or Christian associations. We found 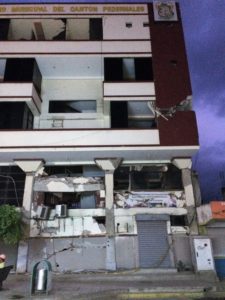 ourselves in one of those to spend a night. Arriving at dusk in a small cross-road village, thinking we would be able to find there a road-side hotel, we got surprised by learning there weren’t any lodging here. We then asked at a shop where we could pitch our tent without disturbing anyone. A woman tells us to go by the soccer field, where other people camp. Surprised to hear that, while camping is not really a thing here in Ecuador, we realized by arriving in the park that she was talking about a refugee camp from the earthquake. We get to know some people who were by the entrance of the camp, inviting us quickly to install our gear close to theirs for the night. It was one of the strongest moment of the trip, getting to know the reality of those people, who beside the fact their houses got demolished and the little they have, are still laughing and believing in life.

Other key moments include two days in a row fixing a dozen of flat tires, a boat crossing through a bay and and climb back in the Andes quite spectacular… and exhausting!

The Northwest of Ecuador was a region I didn’t explore during my trip through the Americas (you can click on the arrow on the top left corner to choose to show where I went in 2013). The experience has been fantastic, and most importantly, made me realize that I still love to travel by bicycle! Even though it was the longest bike ride ever for François, for me it was short compared to other trips… and I definitely desire to leave for longer!

My Sherpa back in shape in Québec

If my first two years working as a trip leader mainly brought me outside of Canada, my third year made me recall where are my roots. I got the position of Trip Expert on the Quebec tour. Moreover than accompanying groups, I coordinate the development of the tour and the relations between the office, the leaders and the subcontractors. By doing this, I double my time spent yearly in Quebec, from 2 to 4 months!

It was the moment to put my baby back on the road. Last year, I offered him a clean up and refresher: new rims, new derailleur, new braking system, new back panniers, among other things. I couldn’t put it back on the road as I was missing time though. This year, the summer was also busy with work, but I could offer me 5 days in Chaudières-Appalaches and Bas-St-Laurent.

I first cycled along the flamboyant coast of the Saint Lawrence, following mainly on reverse the route I took by bicycle 12 years ago when I was crossing Canada (which

can be available on the map). I did a few detours to enter the villages instead of staying on the main road though, following the  the Route Verte #1 itinerary. The St. Lawrence is the spine of Quebec. It’s our history, our economy and it’s always with amazement that I go along it.

In Rivière-du-Loup, I veered toward the interior, on the Petit Témis Interprovincial Linear Park, a former train track transformed on bike path. The experience is through the forest and you don’t meet many people. In some places, wooden platforms are set up to pitch the tent away from the ground humidity for the night.

I took roads to link the linear park and Pohénégamook, which sit on the border with United States. From there, I tried to find the start of a thin line I could see on maps online, which bears the name of Linear Park Monk. If I could see it was a bike path south of Levis in Chaudières-Appalaches, I wasn’t able to find information about the section in Bas-St-Laurent. But anyhow, in that case, better to go see by yourself! It was also a former train track, but in this case, it was set up for snowmobile in winter and four-wheelers in the summer. In theory, I shouldn’t have to be there with my 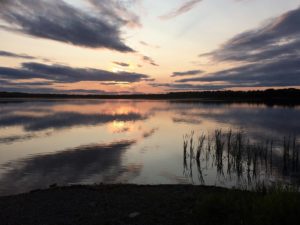 bicycle. The few four-wheelers I met didn’t seem to make a fuss about it though, but I was taking good care to yield way. Two days in the forest, not meeting people, biking on a surface that sometimes was quite a bit rocky, but still doable. It really permitted me to float away from work. Finally, close to Armagh, the path became paved, wandering through the farming land of the Etchemin valley.

My Sherpa is still apt for the road and is now asking me for more! Five days wasn’t enough! I also understood that sleeping and a thin camping mattress wherever it needs to be (I spent all those nights wild camping) was still something I enjoy doing. All those luxury lodging I go to for work didn’t contaminate me!