I biked there only four days, but I spent almost three weeks in Bolivia. Visit made me take vacation from the bicycle for about 15 days, right at the good time after finishing Peru. I could visit La Paz and its surroundings, rest and get ready for what’s ahead.

I haven’t cross a lot of Bolivia, staying mainly around the capital, in the northwest corner of the country, beside the Altiplano. Evo Morales, the socialist president in power since 2006, renamed the country on its long version of Plurinational State of Bolivia (Estado Plurinacional de Bolivia) in the new 2009 Constitution. Elected after a strong popular movement in 2003 where he build up some political capital, Morales says no to United States’ imperialism and what to give back a voice to Bolivia’s different ethnic groups. I’ve seen only a tiny part of those many faces coloring the country.

Facts in the loose. Bolivia has a coca leave vice minister, as well as a decolonization vice minister. Bolivia is the only South American country without McDonald’s, not because the government show them the door, but apparently because they were just not making any profit, not enough people going. Poorest country in Latin America, Bolivia don’t have any access to the sea. The Antofagasta region, in Chile, was Bolivian until 1879, lost in the Pacific War. You can still see on some Bolivian maps the appellation “Bolivian littoral” on Chilean territory, and you can learn more at the Bolivian Littoral Museum in La Paz. 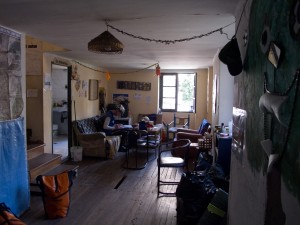 In La Paz, Christian’s casa de ciclista is a not-to-miss for the cyclotourist. According to him, it doesn’t happen a lot of time that there is nobody a the casa. Moreover than those doing the Andes road, from or to Cusco, you meet other coming from Brasil and Paraguay or other fewer going down to the Amazon to get to Manaus. There is always someone planing his way through Salar de Uyuni and the Lagunas road, hardcore Bolivian itinerary but quite popular between cyclotourists (I chose a array of roads almost as much hardcore, but on the Chilean side). The ambiance and the location of the casa de ciclista downtown, close to a university, will make you want to stay many days. It’s a two-floor apartment where the living room, the bathroom and kitchen are on the lower floor, and the upper one consists of two rooms where you put your sleeping mattress and sleeping bag. You pile up or spread out depending on the number of people that day. Those who want more solitude or intimacy will have to go to the hotel. At the casa de ciclista, we share stories, happiness and sadness in every languages you can speak around a heavy calories meal to make some reserve for the road ahead.

Apart from that, it’s possible to find lodging for even cheaper than in Peru, but even less quality is expected. In some places, having a shower in a luxury, so don’t think too much about hot water. Better to pitch your tent in a quiet place, if you can find, for more comfort.

If in La Paz you can eat kebab on a street corner, an American style breakfast with bacon, eggs and filter coffee or treating yourself with a confit of duck and crème brûlée in a French restaurant for a third of the price of what it would cost in France, back on the Altiplano, it’s back to real life. The daily menu is even cheaper than in Peru but you often won’t get anything to drink, but you’ll get bread. Fruits are sometimes hard to find. Some villages aren’t on a water distribution system (a truck has to come from time to time to fill buckets). With the little time passed here, I can’t say more about local specialties. Will have to come back!

I entered Bolivia through Desaguadero border town, where the road is filled with any kind of sellers on both side of the border. Crossing a vehicle might be a good challenge. Even if it’s the main border town between Peru and Bolivia, no trucks seems to pass the border. People are emptying a truck and the merchandise (when I was there, potatoes) is transferred to an other one on the other side by a dozen of cyclists pushing big tricycles making their ways on the bridge. 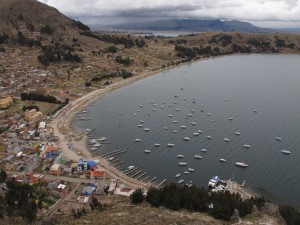 Cyclotourists generally cross the border at the other entrance near Copacabana, which offer better scenery (but less flat and direct). I went to Copacabana by bus for a few days when I was with my friend, If the town has its charm with the wharfs on Titicaca lake, there were a Argentinian community taking possession of the place when I was there, competing the local artwork by selling their creations or others trying to sell you vegetarian sandwiches or other stuff made on the corner of their youth hostel. I don’t recommend to cyclists to go to Isla del Sol (even though other types of tourists could enjoy it). If the boat ride can be interesting, the island offers the same kind of scenery and small villages that you get to on a bicycle, minus the tourist traps. You’ll be forced to pay to walk on the path three times, an aleatory price according to your face (the one in the middle took out a second pass a third of the price of the first one after long negotiation). It’s not about the amount of money (we are talking a few dollars here), but if there were a fixed price, announced and controlled at the beginning, this would avoid some awkward situations.

Cycling in La Paz can give you a good adrenaline dose. Fortunately, I entered a Sunday. To get out, I followed Christian’s advice from the casa de ciclista: on the main boulevard, drive on the left lane, along the median strip. The conflict with bicycle is not with cars, but more with combis, mini-buses which are always stopping, passing and cutting you, that you have to pass afterward. It has to be understood that there is more combis and taxis than private cars downtown. Driving left avoid them, and you won’t go that much slower than the traffic.

Back on the Altiplano (repeat the driving left technique to get out of El Alto), the Panamerican is in a desolate state. Beside, a double lane road is being build, I presume to make a separated lane highway. I was there at the perfect time, the new road being finished or about to be, but still not opened, making a huge temporary bicycle path far away from traffic.

From Patacamaya, I took the road to Sajama volcano and Chile. Others will take this road to go back later in Bolivia after going along the border, to make the Salar de Uyuni. Others will go directly to the Salar staying in Bolivia, others will go to Argentina, or Paraguay. There are choices, but don’t expect smooth asphalt and understandable and clear signalization!