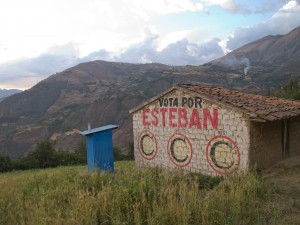 I spent more than two months in Peru, almost as much as in Mexico, United State or Canada. I haven’t take the straight line though to cross the country. While I was thinking wandering in the mountains from North to South on Ruta 3, I finally diverged to a high pass, then down the coast, to go back in the mountains.

If mountains are slowing things down, illness as well. From intestinal problems that seems to be the norm to cyclotourist met on the road, I went all the way to anemia.

Peru is extremes, from laugh to tears, from amazement to disgust, from sweat to shivers, from genuine encounters to the ones you want to forget.

To paraphrase a solo cyclotourist which whom I was talking to about our experiences, we are a little bit more alone in Peru. Discussion aren’t very deep, compared to other countries. We are being taken for the Other, the stranger from far away very different, and in a vicious circle, the Peruvian become the Other as well. Cultural sharing was more difficult. Quickly you are being asked how much worth the bicycle, how much I spend. The impression of being seen as a big buck sign, the Uncle Sam’s one. The relation with money they have is hard to follow. Even Chilean travelers I met, who came from one of the most capitalist country in South America, noticed the intense relation of the Peruvian toward money. The metal one, the shinny, not the paper. 4 pieces of 5 soles will be preferred than a 20 soles bill. When your money is called “sun” (sol), maybe an anthropologist could find an interesting correlation.

Otherwise, the discussion goes around how I dare to leave my family, from the women, and where is my wife, from the men. Llevate una peruana, bring you back a Peruvian, as if it was a merchandise. Women’s conditions and treatment is the saddest that I’ve been aware of in Latin America so far. Of course, I say that with my Other’s eye, the one that still has a lot of interrogations on Peruvian culture.

Dogs in Peru beat the aggressiveness award I gave to Mexican ones. More than a simple run after the cyclist, my luggage got bitten many times. My passivity against los mal criados (the bad breed) turn to offensive. I got the habit of having rocks not to far to throw and I develop a good pedal unclick and lateral kick that hurt a few snouts. A kid also started running after me and hanging himself to my luggage. It is badly recommended to throw rocks at him though. Neither at the kids throwing rocks at you: reciprocity doesn’t apply here. Make as if it was normal.

A lot of things for this report introduction. If it can seems negative, don’t forget that I said that it is extremes land. Peru has its spot in my heart. If I have the occasion to go back one day, I surely won’t say no, to resolve a few interrogations and rediscovere the good moments I had there. 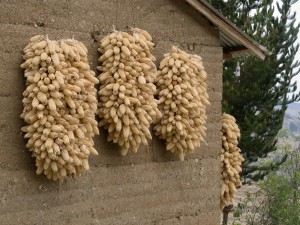 Not just the chicken and rice menu, if you don’t want to finish with anemia! However, in small towns, there is sometimes nothing else on the menu. Irony on the side, the daily menu is even cheaper than in Ecuador, which was cheaper than in Colombia. For a solo traveler, it’s cheaper to eat in restaurants than buying and cooking your things. You eat what’s around, so there are a lot of differences from one region to the other. It’s in the soup more than in the main meal that I find my happiness: a lot of different potatoes as well as a variety of vegetables, often with barley or semolina to sustain everything. And of course, you can get the usual surprise, as before, like a chicken leg or guts.

Sometimes (often on Saturdays?), soup is replaced by papas a la huancaína, potatoes with a delicious sauce to make you roll on the floor, made with onions, aji, milk, fresh cheese and oil. Aji is this thing on the restaurant’s table to make your food burn in your month.

About the famous Peruvian ceviche (fish or seafood “cooked” while letting them dip in lemon juice), don’t think to see a lot in the mountains: go down the coast. However, in regions were lakes are found, you can eat delicious truchas fritas (fried trouts or unnamed fish).

Juguerías, juice shop, are found on the street or in markets and offer fresh fruit juice. I got along well with jugo especial with an egg, maca, a cereal with powerful properties and other natural products that make you push the pedals a little bit harder. 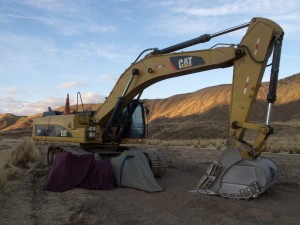 Camping is not a normal activity here and will attract curious souls. Better trying to camp away from whoever’s vision. I spent about 25% of my nights under the tent, either like this, or otherwise sleeping close to businesses asking permission, like restaurants or gas stations. This give security as well as toilets and maybe food!

In touristic towns, like Huaraz in the Cordillera Blanca and the famous Cusco, or other big cities like Huancayo, it’s possible to find youth hostels which, even if you are in a dorm, will get you meeting other travelers and give you hot water, a kitchen and wifi. Some of them, like La Estrellita in Cusco and Santiago’s House and Joe’s Place in Huaraz are cyclotourist oasis, letting you meet other people with whom you are sharing the same happiness and troubles. There is a casa de ciclista quite famous in Trujillo, on the Northern Coast, but it wasn’t on my itinerary.

There aren’t a lot of active CouchSurfers or WarmShowers, but those traveling the coast might be more lucky. While I haven’t put on a podium the Peruvian hospitality, I don’t have to forget that some people generously opened their door and even gave food, without asking anything apart from smiles and a few stories.

It will be way easier to travel on the whole length of the Cordillera in a few years (or a few dozen of years) with the Longitudinal de la Sierra project, which would link mountain roads in one paved link from one end to the other. Some segments are currently in construction, other still look like dirt tracks without any signs. There is something for everybody’s taste. Climbs are long but smooth, and downhills, as much as long! Nothing as satisfactory and such a sensation to go down for more than 50 kilometers!

Others will prefer to go on the coast. Note that there as been regular attacks on cyclist north of Trujillo, but sometimes police offers escort service. Get informed at Trujillo’s casa de ciclista. Then you need to cross Lima, which is quite spread out, but apparently, the road has a good shoulder that put things easier.

The challenge on the coast is the wind. In the mountains, generally, wind is counter current in the valleys. So when going down, you are slowed down a bit, but the wind helps you on the way up. The Amazon side is less deserved with road infrastructures, but they are probably bikeable parts! A new road also link Peru to Brasil, going down to Amazonia, close to Cusco.