When the appetite goes, everything goes

Or almost. I left Cajamarca’s region, finishing with it’s homonym capital (which hasn’t reconciled me with Peruvian cities), with at least the impression that my intestine was going back on track. I won’t talk about my shit a lot longer, just to say that you appreciate way more life and what’s around when you can stop thinking about what’s inside. Pushed by this new energy, helped by a favorable wind, a well paved road and two small valleys, I did 125 kilometers that day, bringing me quite close to La Libertad region. This will compensate for days where I’ll make 25 or 40 pretty soon…

La Libertad region is mainly a coastal region, with a small part in the Sierra, stuck between Cajamarca and Ancash regions. Compared to its two mountainous neighbors, it seems that the administration tends to neglect a little bit the infrastructures of its higher part, even though if crossing Huamachuco made me realize that it’s not that small. It was fiesta over there, and a good idea not to spend the night there if I really wanted to sleep, but I could nonetheless assist in the afternoon to an historical reconstitution in dance and music of what happened in the area. I then went back on the road until the intersection with a mining road, that will avoid me many kilometers, and most importantly, a lot of elevation climb.

The “main road”, which a little bit after the place I left it is not paved anymore, is curving a lot around and climb over 3.000 meters. There’s a way to make it shorter and stay between the 2.000 and 3.000 meters line, through small quiet roads and different mining projects. Of course, there is no signalization, not always bridges, but a road always bring somewhere and I’ll eventually get to destination! And even if it’s not the busiest road, there is always someone who shows up somewhere who can give me details about the road to come.

Until the thunderstorm, the hail, the wind and the penetrating cold arrive.

Not a house in sight. I have no choice, I have to go on in those conditions. If I stop, I freeze, I get wetter… and I’m going nowhere on this pass that I’m climbing and which I’m desperately looking for the descent. I don’t know why I was looking forward to it because here I am braking with my hands which don’t really know if they are cold anymore, in mud that splashes me to the knee. Way down there, I see this red roof. It’s still far, I don’t go down really fast, but it’s keeping me motivated.

It’s a school. Strange place, as there is no houses around. I go under the outside roof, get down from my bicycle and jump in shivering from one door to another. The last building which is used as a kitchen isn’t locked. I go get back my bicycle keep focused to treat in priority a beginning of hypothermia. Slowly, but surely, I put some dry clothes, get into my sleeping bag, sipping a not too hot tea. It’s mid afternoon and I don’t need much to convince me that I won’t go further today. Even if the next day was a Monday, nobody came to push the door against I’d put my bicycle as an alarm system. What’s going on? There is something strange here…

There is no noise. I give a glance trough the window. The sky is without clouds. Two vicunas are grazing a little bit lower… and that’s it. The view is amazing. High spotted over the surrounding mountains, I see a mine, but it is so far that the noise from it don’t get to my ears. It’s been a while since I slept peacefully like that…

From cold to warming

A truck driver stops and gives me bread with jam. Lower, a farmer wants to share the family lunch with me. I get on the “main road”, which is not that different from the ones I was and go on, and go down, and down.

People told me about a family down the river which as a little hotel… and hot springs. I don’t stay long in Mollepata and even if it was getting dark, I go down the laces gripped to the steep valley wall to get to Chiquicara river, which is the border between La Libertad and Ancash region. After all this cold felt lately, nothing best to go sit in a hot water bath, gazing at the star and the small Moon crescent.

I did 25 kilometers the next day, not because I got lazy in the hot springs, but because of instead of going back on the main road (now paved), going all the way back up the valley wall to Pallasca, I tried my luck on a road (…no, we can’t call that a road) following the river flowing, going back later to the main road coming back from up there. It wasn’t the best idea, it will be possible to see that in an upcoming video, but I come back to civilization, extenuated. I don’t even have the time to reach the pavement that a woman sees me getting out of this trail and invite me to her house. His husband is rebuilding the house to put it ready for “the arriving of electricity” in Sacaycacha, which he talks about with stars in the eyes. Let’s hope it’s not false electoral promises.

Small in this world

The Andes are dominating the valley, rocky reddish summits looking at me passing by this raging river, on a thin road sculpted on the cliff, with a few cactuses saying me hello. I get to the intersection with Santa river, to go on an other road, which I’ll take against current this time. I’m in an other world, in a kind a desert. The dust is rolling, the sun is strong, I feel like in a latino Far West in this town used as a service post for the traffic coming from the coast. Slowly, on the rocky road, I go through uninhabited (or almost) little posts, the river goes through a canyon, bringing me in dark and thin tunnels, letting me drop “wows” while getting out, felling quite small in this immensity.

While I was about to clean my chain and put back some air in my tires outside a tunnel that was bringing at the same time the pavement, a French cyclist arrives in opposite direction. While I was chitchatting with him and exchanging a map from Ecuador against is leftover of Chilean and Argentinian coins, Adrian, a Swiss-German cyclist, appears behind me, apparently following me since a few days. We went to Caraz together that day. The city surprised me, after this remote week: clean cars, fashion clothing, sunglasses, wifi, restaurants with varied menu. Quite a contrast with the rusty cars from the dirt roads, traditional hats and clothing and the fade restaurant from the corner that characterized my last days.

I did seven continuous days, and we take advantage of a day off to get to Laguna del Parron. We put the bicycles without luggages on a minibus which brought us half way, letting us 15 kilometers of rocky climbing to this turquoise lake at 4.200 meters, surrounded by glaciers. We are in the Cordillera Blanca, the White Cordillera, topped with the highest mountains in Peru, with snowy peaks.

We are so small.

As a rest day, we will think again about that. The downhill was almost harder than the uphill. We nonetheless go back on the road the next day. The atmosphere is different in this valley. It seems that each town is celebrating something. Area more touristic (of what I’ve seen so far), people are more use to see foreigners, “gringo” shouts are less. We get to the main town, Huaraz, where we meet hikers who recommended us the excellent Santiago’s House, where we meet two other cyclists, Anna and Cass, in a cyclotourim style of “we take the smallest road as possible” And “road” is a big word.

Adrian continues on his road to Lima, while as for me, I take advantage of the big city to get ready for the altitude awaiting me for the next month. Rarely I’ll get under 3.000 meters. Warm socks, gloves, new underwear, new pants to put while cycling (to replace my shorts that became to tall, my parasites making me loose my ass’ fat) and coca leaves, here I am ready for the long mountainous road that will bring me to Cuzco. 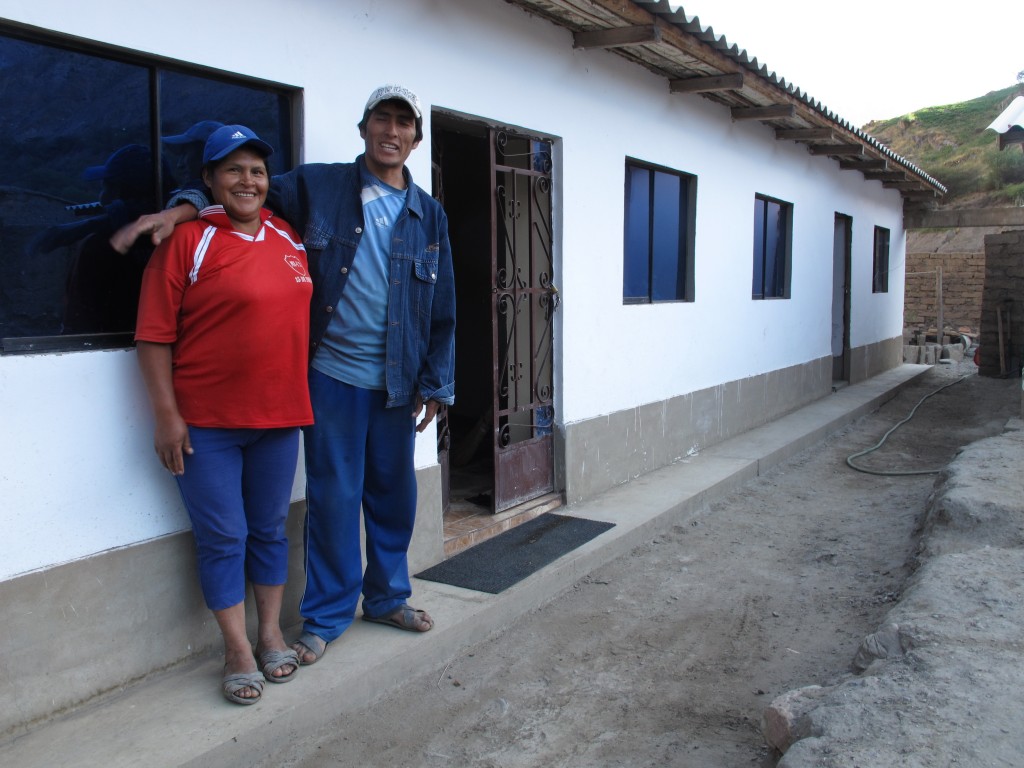