That’s it, here I am. It’s around 9:30 in the evening, the sailboat’s captain drop me off with the inflated motor boat on a little wooden pier with my bicycle and other people’s luggage. He leaves me alone while he goes get the other passengers off the sailboat. Trying to keep my balance on something that is not moving, I set up my panniers on my steel structure. Here we are, in South America. And not too far from here, those mountains that will be my companions until Patagonia: the Andes.

With two New Zelanders, we walk from the residential high-rise beachfront neighborhood to a part of the historical district where gathers youth hostels in a part of the Old town where gentrification haven’t yet made the lower classes of the city go away. We have to meet the captain after tomorrow to get our passport back, stamped by the port authorities. Cartagena is a very good looking city, with an historical center set up and controlled to let the visitors, Colombians and foreigners, enjoy the costeña culture. There is a charm wanting you to stay for a while, walking along the fortifications and wandering in the many public places.

I won’t fall under the charm, the heat and the rain giving me the thrill to throw myself into the Andes. I fell them calling me, my body need some fresher air, my legs are ready for a new challenge.

Cartagena has a totally other face beyond the sea-front. In a crazy traffic on the only access road to the city, I am zigzagging through buses and dozens of motorcycles surrounding me in an exhaust gas cloud, while itinerant sellers seems to survive in this noisy environment. Things will calm down, making my way over low hills to Caucasia, where I’ll enter in a valley that will bring me to the heights of Antioquia, Medellín’s department. Rain and thunderstorms are there to flood me without too much warning, letting me forget for a moment the heat and cleaning me from the trucks’ dust.

The “lower Colombia” made me discover people active in their inertia, a little bit disorganized (let’s say it) and festive. I’ve been told that in “upper Colombia” things are very different. I was impressed by the number of people going around in motorcycles. There are toll stations on every main road and motorcycles (and bicycles) go for free. I’ve already seen somewhere else many people squeezing up on a motorcycle, but seeing the whole 5-person family without helmet or this couple carrying a 36 inches TV, or those two men carrying their construction tools, including 12-feet steel pipes in the wind, that was kinda new. I am cycling under cumbia or reaggeaton rhythms, coming out from the houses, if their inhabitants haven’t simply brought their huge speakers out on the porch for the neighbors to enjoy even more their musical tastes. I am avoiding to stop in a few places because the music seems too loud already from the street, but when I see those man sipping their beer just beside the speaker, I figure out that I am the one with audition sensitivity. People are entertaining themselves looking at life passing away on the paved road in front of them and it seems like I am a discussions’ starter. I am being looked at with a jaw-dropping face, or I am warmly waved at. If people aren’t directly talking to me, the group will talk about me, about what I am carrying, about my craziness, without thinking that I hear (and understand) them. A few motorcycle drivers stop by me and follow me for a while, wanting to know where I’m from and what I’m doing; last time where people were stopping like that was in the Canadian Great North. Each village are developed around a specific selling of something. A village is selling shoes, the other, furnitures; an other one sells cheese shortbread. I go through handicraft stands selling more or less the same in one village and an other one close to a river seems to have more restaurant than people. 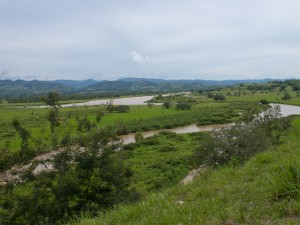 Leaving Caucasia, I start my fourth cycling day and I see them: on each side, mountains. I spend the day slowly going up Cauca river, while the mountains are getting closer and closer. Water is coming out from everywhere. A waterfall surprises me after a curve, further away more waterfalls are cutting the green of the mountains. People catch some of this water in pipes and carwash is the business around there.

I arrive at Puerto Valvidia, the road crosses the river and start to climb up the mountain slope. It’s not an official goodbye to the river but just a see you later. I’ll see the Cauca again while it will be at 1000 meters elevation in the valley where Cali sits. In half an hour, I’ll do just 3 kilometers, so I set up my tent, hidden below a safety wall. Andes’ baptism will wait tomorrow.

It took me 4 hours and a half to reach the pass through a continuous 35-km uphill. Sometimes, the road was so steep that the trucks seemed to work as hard as me to go up. There were a lot of construction zones, the road’s probably sliding down from the steep slope, even though there is many safety walls. I could keep my rhythm by skipping the car’s line and making my way through the construction site. Hunger was pulling my leg, dogs were coming out from nowhere to run after me and rain got me wet for the last hour. I couldn’t stop, I would have made everything wet by opening my bags, and I had the feeling that if I stop, starting again would be very hard.

Why am I doing this? Why did I put myself in this situation? Why did I decided to bike in the Andes? I am climbing up 2.000 meters in 35 kilometers…

I finally make it up there, a little tienda giving me a shelter for my bike an I. Cold surprises me once stopped, I swallow up small fried empanadas and chorizos, the only things available for now, under the amazed eyes of the two women behind the counter. Here I am, up there. I’ll go on climbing a bit later, but not as much.

The landscape has changed so much. I went from palm trees to pine trees in a day; from shorts and shirtless people to long-sleeves shirts; simple metal roofed house to bricks. I go from one colonial village to an other, on a road lacing up mountains through dairy farms. From 2500-meter Santa Maria del Oso, the road goes down a thousand meters to reach Medellín, the antioqueña capital.

For that. For those thrilling downhills that I am having. For those wonderful sceneries taking shape right before my eyes. For the satisfaction that submerges me while I reach the next pass and the sight of the next downhill.

In Medellín, Manuela and her family was waiting for me. One of her daughter migrated to Montreal and saw me on TV before I leave. There is no way that I pass Medellín without staying with her family. They quickly made me feel like one of them, sharing daily life in this house shared by three generations of the family. They didn’t want to let me go with an empty stomach, and then they just didn’t want to let me go! I spent six days exploring the second biggest city of Colombia and sharing stories with the family. Awesome Colombian hospitality.

Out of the 45 millions people living in Colombia, an estimated 5 millions are desplazados, “moved”, who flew from the original region. A reporter asking too much questions. A farmer having the good land for drug production. The Colombian Revolutionaries Armed Forces (FARC) and their counterpart, the paramilitaries, putting their pion through civil population. While on TV, they cheering themselves up about the progress of the peace negotiation between the FARCs and the government, meeting in La Havana, they also talk about the little girl who walk on a mine today. I try not to deviated my look when I see on the countryside, more than I saw elsewhere, young and not that young people who miss a leg or an arm. And while this heavy heritage is about to be part of the past, the Canadian mining company are coming to chase the people living on the good land, sending them down the hills to drink the water contaminated by mining exploitation. If normally I consider Canadian citizenship as a winter jacket, meaning like something you don’t like to wear but that is quite useful to get outside, I’ve been told that south of Cali, where those soulless multinationals are operating, I’m better passing for a French guy.

I leave Medellín and after 60 kilometers on the PanAmerican, climbing 900 meters to a pass (puff, easy), I turn left on a little road that will bring me to Manizales, through small colonial villages set on top of high mountains, looking over deep valley. While Salamina looks like at my height and 2 kilometers away if flying while I’m leaving Pacora, it will actually take me two hours and a half and 20 kilometers to get there. I navigate like that in between each villages, on a road where pavement sometimes stop for a while, going over a former landslide. Eventually, Manizales appears, with its huge cathedral overlooking the valley, looking at me for an hour before I reach it. With Pereira and Armenia, those three cities form the “Coffee Triangle”, where grows most of Colombia’s coffee production. It’s one of the region with the best road infrastructure that I’ve seen. I go on same-way double lanes separated from the reverse traffic, giving me the opportunity to safely pass from the left the trucks and the car on downhills with just enough thigh curves. I met Warmshowers host in Pereira and Armenia that made me discover their chunck of the country. From Armenia, I could see the sky full of stars over me, but brightened by violent lightning to the West. It’s the storms from the Chocó, a department on the other side of the Western Cordillera, keeping all the rain from the Pacific. From time to time, a cloud succeed going over the peaks to get the other side wet.

I leave the Central Cordillera to go down in the Cauca valley, the river I left about 500 kilometers earlier. It’s a large piece of fertile land between the two cordilleras, under a radiant sun, clouds hanging on the western mountains. Before, small cultivators were growing about everything here. Since the fifties, sugar cane monoculture took over the economical control of the area. I followed those flat roads surrounded by green stalks, stopping in Tuluá where my host brought me to the local newspaper, then doing my last kilometers to Cali, where it will be good to stop for a while…