I crossed Wyoming in a kind of winding diagonal with a few detours, which gave me the opportunity to enjoy the contrasts of this square state just over the other square that is Colorado. Wyoming, with its 568.000 inhabitants, is the less populated state of USA. Now on the road by myself, I was about to confront solitude with a mix of excitement and apprehension. Moreover, the obscurity was taking place earlier every day and it wasn’t rare anymore to wake up with ice on and around my tent. My forehead flashlight wasn’t at the bottom of my panniers anymore, using it every night, and my 20° F sleeping bag is proving it’s efficiency: I don’t want to get out of it in the morning!

I wasn’t expecting to be alone on my first days in Wyoming though. I was visiting Yellowstone National Park, known for being very busy. I was quite happy to visit it in September, while it was calmer. I wasn’t expecting neither to meet with my aunt, who is traveling by motorcycle with a friend, while I was just setting up at Tower Fall campground. Happy reunion around a campfire, with a good camping meal and wonderful stories. Those campgrounds offering sites for cyclists and hikers for 5 to 7 $ made my happiness in the park, permitting me to stretch my visit there by spending 5 marvelous days of discoveries. Yellowstone is boiling from everywhere : hot springs, warm pools and geysers are sprouted all over the place. An image worth a thousand words, so more about Yellowstone here!

I left Yellowstone with Yaris, a British met the former evening (who took this top article picture). A thick layer of smoke surprised us on a downhill, more thick than everything I went across in Montana. We had to stop to put our scarf over or mouth and nose. I was putting in perspective the idea of doing that 40-km detour to visit Grand Teton National Park. It wouldn’t really worth it if I don’t see anything…

Luckily, while a little reunion that happened in Flagg Ranch where we met four other cyclist, two of them being met already in Montana, the smoke got a little bit away. Let’s go toward Jenny Lake then, and I even took the opportunity to do a little hike the next morning to get closer to the mountains, while Yaris was already on his way West. Then, that was enough with little detours: it was time to go forward! I left those mountains named by trappers probably far from their fiancées to go over other parts of land traveled by French Canadians. Many names outline their contribution in the West exploration : Gros Ventre river, Nez Perce native nation, the city of Dubois… and the commemorative signs on the road tell about those “Canadian engagés” or “Canadian voyageurs” that were part of United States expeditions.

I didn’t share the road for long with an Albertan girl “sprinting” to Nicaragua for December as I was turning off toward Union Pass, on maybe some ancestors tracks. That road is on gravel now and is part of the Great Divide Mountain Bicycle Route. I saw on those two days more animals than people : porcupines, eagles, deers, moose, elks (with a piercing cry at night) and pronghorns, an endemic specie wrongly named antelope, with their twisted horns and white behind. 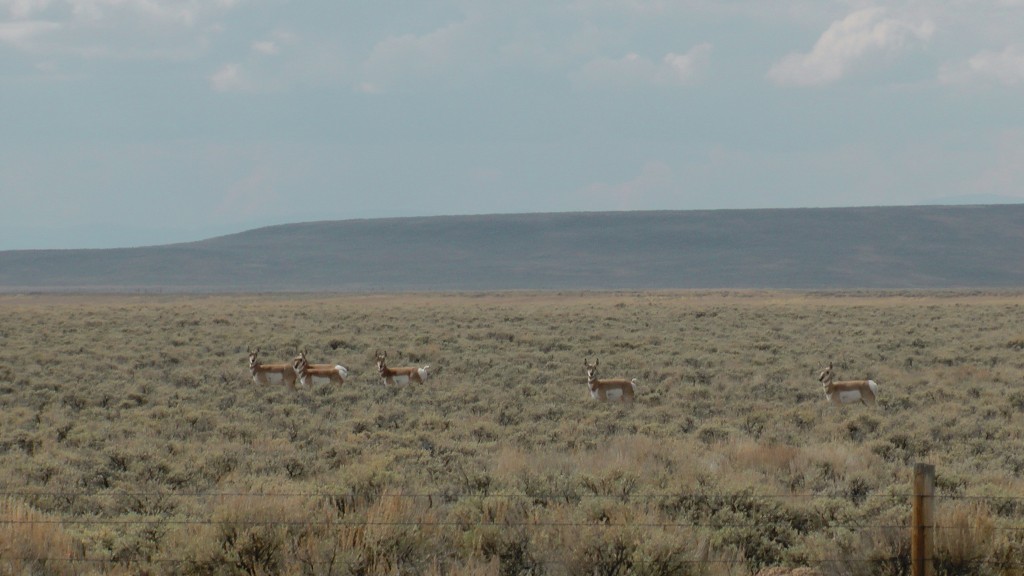 I arrived in Pinedale and quickly got charmed by its western style, with its large streets, its wooden buildings and those men on the street or in their big truck with their cowboy hat. I was getting there while I was marking down my 100th day since Inuvik in my logbook. I celebrated at a CouchSurfer’s house, keeping in mind the project’s objective: Cono Sur is a name for the geographical zone comprising Chile and Argentina, and I couldn’t take an other bottle when I saw the bicycle on the label. Moreover, it was good! My stay in Pinedale was memorable because of my host that made me discover their lifestyle (and their food!) in her environment. 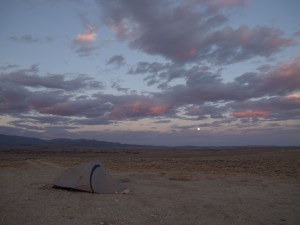 Four days of beautiful scenery without trees was separating Pinedale of Rawlins, through remote roads. Totally dependent of the wind, it was favorable to me the first days while I was going East, but hardly hit me on the side as soon as I veered South. This wind was getting cold as soon the sun gone. I would have liked that this moon, that was enlightening my tent a good part of the night, was reflecting more than just the sunlight. To have less air current under my tent, I was laying down my bike just beside it, on the wind side. I went through the Great Divide Basin, a zone which doesn’t belong neither to the Atlantic watershed, neither the Pacific one. Water, for the less there were here, was flowing to the center and evaporating. It goes without saying that I had to carry a lot of water and topping up my bottles when I was seeing a creek, as the other one could be far.

Rawlins was short. I wasn’t feeling welcomed. Three time I was told to go away in different manners. Openly I have been told in a gas station while I was doing a few purchases : “Oh, you’re probably meeting a lot of great people on the road, but not here, people is not nice”. Sincerely, my first real redneck town. Fast enough, I got out of there, keeping my smile, to go sleep by a reservoir, thing that you can’t call a lake as it is manmade, but that is still filling up my bottles in the morning. Then, back on the windy road toward Colorado and those autumn colored trees that were pointing up the horizon…

Map of my itinerary in Wyoming: