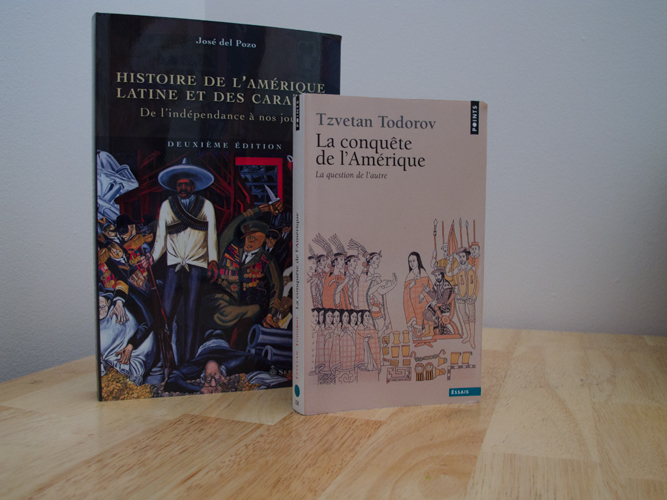 While my bike is stored until the snow melts, I keep myself busy (as if I wasn’t busy enough) by reading a little bit. The first book, The Conquest of America, by Tzvetan Todorov, was submitted to me through a psycho-sociology class at the university. The subtitle, The question of the Other, is much more important than the main title for my class. This essay discusses about inaccurate perceptions that people often have of others and constructions that we make from a newly discovered place. Taking place during America’s conquest made by the Spanish conquistadores and during the greatest genocide in history of humanity that ensued, this book allowed me to learn a lot more about what happened. Various historical figures are portrayed as Columbus, Cortes, Montezuma, Duran and Las Casas, showing their relation with otherness. One will react in a contemptuous way, without attempting to know the culture he is facing. In the opposite, an other will want to know all the details in order to better control the unknown, in order to take advantage of the other by controlling information. An other will idealize them by putting on a pedestal a culture that he does not really know. In the end, the ideal reaction to otherness seems humanly difficult to achieve.

The second book, History of Latin America and the Caribbean – From Independence to the Present by José del Pozo, is a bit more pragmatic, but yet relevant. I have also discovered this one at the university, in an optional class that I chose, but that I had to cancel because my schedule was getting too busy. Although I don’t go, I decided to get the book. I just started it, and it will take me to the hectic days of the early 19th century, when most Latin American countries were getting independent, until our time. This is a part of the world from which, apart from the arrival of Christopher Columbus in 1492, we don’t learn a lot in our poor history highschool’s lessons here, so I find it very useful to know more before leaving. It might be fine to “enjoy the moment” on a trip, but to understand what’s going on, we have to understand how we got there.

I think it’s okay to activate those neurons before leaving, but I also have to activate my muscles! The program this winter, every week, is:

In short, I think I am not that much acting like an hibernating bear this winter! Will I be ready for the big day, which is fast approaching?